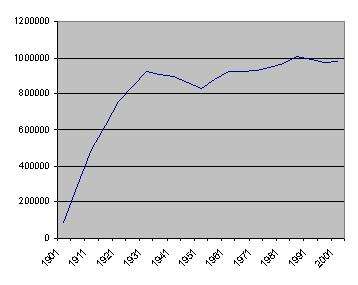 Note: The following statistics include a combination of individual and multiple responses from the 2001 Census, and therefore do not add up to 100%.[5]

Due to the emigration of its non-indigenous peoples' population and the high birthrate of the aboriginal population it is estimated that by 2045 aboriginal people (including both Métis and First Nations) will make up just under a third of the province's population.

The 2006 census showed a population of 968,157. Of the 946,250 singular responses to the census question concerning mother tongue the languages most commonly reported were:

A total of 81,535 people moved to Saskatchewan from other parts of Canada between 1996 and 2006 while 131,845 people moved in the opposite direction. These movements resulted in a net outmigration of 42,000 people to Alberta, 4,980 to British Columbia, and 4,570 to Ontario; as well as a net influx of 940 people from Newfoundland and Labrador, and 610 people from Manitoba. During this period there was a net outmigration of 775 francophones to Alberta, 545 to Quebec, 170 to Ontario, and 125 to British Columbia; as well as a net influx of 180 anglophones from Quebec. (All net inter-provincial movements of more than 500 persons and official minority movements of more than 100 persons are given.)[8][9]

According to the Canada 2001 Census, the most practiced religions in the province were:[10]

151,455 people declared themselves as without religion. 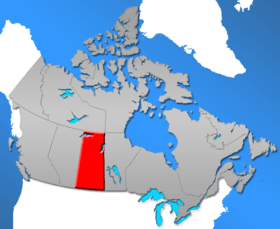