New Brunswick is one of Canada's three Maritime provinces, and the only officially bilingual province (French and English) in the country. The provincial Department of Finance estimates that the province's population in 2006 was 729,997 of which the majority is English-speaking but with a substantial (32%) French-speaking minority of mostly Acadian origin.

First Nations in New Brunswick include the Mi'kmaq and Wolastoqiyik (Maliseet). The first European settlers, the Acadians, are descendants of survivors of the Expulsion (1755) which drove several thousand French residents into exile in North America, the UK and France for refusing to take an oath of allegiance to King George II during the French and Indian War. American Acadians, who wound up in Louisiana and other parts of the American South, are often referred to as Cajuns.

Many of the English-Canadian population of New Brunswick are descended from Loyalists who fled the American Revolution. This is commemorated in the province's motto, Spem reduxit ("hope was restored"). There is also a significant population with Irish ancestry, especially in Saint John and the Miramichi Valley. People of Scottish descent are scattered throughout the Province with higher concentrations in the Miramichi and in Campbellton. A small population of Danish origin may be found in New Denmark in the northwest of the province.

Population of New Brunswick since 1851

The information at the left is from Statistics Canada [3] Percentages add to more than 100% because of dual responses e.g. "Danish-Canadian" generates an entry in both the category "Danish" and the category "Canadian". Groups with more than 3,000 responses are included. 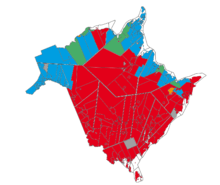 The 2011 Canadian census showed a population of 751,171. Of the 731,855 singular responses to the question concerning mother tongue the most commonly reported languages were:

The 2006 Canadian census counted a total of 28,395 immigrants living in New Brunswick.The most commonly reported origins for these immigrants were: [7]

There were also 195 immigrants from the Democratic Republic of Congo; 180 from Vietnam; 170 from Colombia; 165 each from Hungary and Romania; 155 each from Belgium and El Salvador; 140 each from Greece and Ireland (Éire); 125 from Poland; 120 each from Afghanistan and South Africa; 115 from Ukraine; 110 from Guyana; 105 each from Denmark and from Trinidad and Tobago; and 100 from Austria.

A total of 64,205 people moved to New Brunswick from other parts of Canada between 1996 and 2006 while 83,240 people moved in the opposite direction. These movements resulted in a net outmigration of 8,410 people to Alberta, 4,330 to Ontario, 2,930 to Nova Scotia, and 1,995 to Quebec. During this period there was a net outmigration of 2,125 francophones to Quebec, 1,460 francophones going to Ontario, 1,355 to Alberta and 145 to Nova Scotia; and also a net influx of 240 anglophones from Quebec. (All net inter-provincial movements of more than 500 persons and official minority movements of more than 100 persons are given.)[8][9] 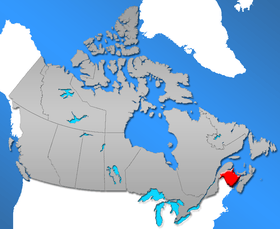