Yukon is the westernmost of Canada's three northern territories. Its capital is Whitehorse. People from Yukon are known as Yukoners (French: Yukonnais).

Population of Yukon since 1901

The 2006 Canadian census showed a population of 30,372.Of the 29,940 singular responses to the census question concerning 'mother tongue' the most commonly reported languages were:

The 2006 Canadian census counted a total of 3,010 immigrants living in Yukon.The most commonly reported countries of birth for these immigrants were: [9]

There were also about forty immigrants from Austria and New Zealand, thirty from the Czech Republic and South Africa, and about twenty-five each from Belgium, Ireland and Poland.

A total of 7,400 people moved to Yukon from other parts of Canada between 1996 and 2006 while 10,505 people moved in the opposite direction. These movements resulted in a net influx of 230 from the Northwest Territories; and a net outmigration of 2,505 to Alberta, 915 to British Columbia and 115 to New Brunswick. There was a net influx of 120 francophones from Quebec during this period. (All net inter-provincial and official minority movements of more than 100 persons are given.)[10][11] 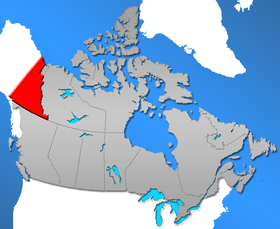 This article is issued from Wikipedia - version of the 6/12/2015. The text is available under the Creative Commons Attribution/Share Alike but additional terms may apply for the media files.