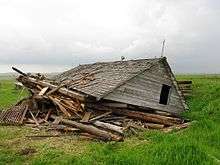 Abandoned farmstead of Steve Kapcsos in Alberta. The early Hungarian immigrants had lived in similar cabins.

The first Hungarians arrived in Alberta in 1866 with Count Paul Oskar Eszterhazy, who wanted Hungarians to re-settle after they had emigrated originally to Pennsylvania. The memorial of János Mráz, in 1895 in Bashaw indicated that there were already 25 Hungarian families, each of which farmed a homestead.[3] The 1900 Census counted 167 Hungarians in the Lethbridge area.

The Canada 2006 Census showed 27,395 people living in Saskatchewan who have Hungarian roots or were born in Hungary.[4] In local, oral Hungarian usage the name of the province was Saskanada.[5]

In 1885 the Hungarian immigrants established several settlements in the eastern region of Saskatchewan. One of them was Esterhaz colony, which still exists. In 1888 a new settlement was founded near Esterhazy, which was named Kaposvár (named after Kaposvár, now part of Esterhazy). By 1902 these two settlements had over 900 people.[6] The nearby Stockholm also became Hungarian settlement (in Hungarian Sokhalom). In 1894 a Hungarian settlement was established Rev. Janos (John) Kovacs in Otthon (which means 'Home'). After 1902 somewhere the current town of Kipling there was a settlement called Békevár ('Peaceburgh').[6] Later Hungarians settled down also in the northern part of Saskatchewan, close to Wakaw, there was the Buda School District. West of Wakaw was the Dunafoldvar district (named after Dunaföldvár), south of Wakaw was Matyasfold (Mátyásföld - 'Land of Matthew').[6]

The first wave of the Hungarian immigrants reached Manitoba in 1885, many of whom settled in or near Winnipeg. In 1906 the Hungarian Presbyterian church was established there. The first Hungarian newspaper in Canada was published in Winnipeg in 1905: Kanadai Magyarság ('Canadian Hungarians').[8] During the First World War, citizens of enemy allies were interned. Between 1918 and 1924 the Hungarian clubs in Winnipeg were very active. By 1920 there were only 13,181 Hungarians in the whole country, most of them in Saskatchewan, only a few in Manitoba. The second wave of the immigration came during the inter-war years. The new immigrants established to Roman Catholic church and the Protestant church in 1924. A new newspaper was founded: Kanadai Magyar Újság ('Canadian Hungarian Newspaper'). In 1927 Hungarian consulate was opened in Winnipeg.

After the First World War thousands of Hungarians emigrated to Canada, especially from the rural classes. After the Second World War people from several classes came to the country. Ontario's climate was similar in some ways to the Hungarian climate so people from the Great Hungarian Plain moved to Ontario. The first Hungarians (60 people) to arrive in Welland did so in 1906.[13] The first Hungarian society was established in Hamilton in 1907, the second was founded in Hamilton in 1913. In 1921 the Hungarian Self Culture Society was established in Welland[12] where the first Hungarian newspaper was also published in 1928.[14] In 1931 the three-fourths of the Hungarian Canadian population lived in Ontario.[11] The 1956 refugees also lifted the Hungarian population in Canada. In 1949 a so-called Delhi & Tobacco District Hungarian House was dedicated in Delhi-Tillsonburg, the centre was initiated by Paul Rapai in 1947. 40 percent (about 1,500 people) of the tobacco factory was Hungarian.[15] In 1933 two Hungarian newspapers were established by Rapai, the Kanadai Magyar Újság and the Wellandi Kisújság.[16] After 1956 abouth 6,000 refugees arrived in Ontario.[15] In 1964 a Roman Catholic church was built in London, Ontario. Roman Catholic churches are still in Toronto, Hamilton and in Courtland. There are still four Greek Catholic churches in Ontario: in Welland, Courtland, Windsor and in Hamilton. Presbyterian churches are in Delhi and in Ottawa.[17]

1956-1957 saw a large wave of Hungarian migration to Prince Edward Island, and probably the largest ever. A special Emergency Relief Committee was established to manage the arrival of Hungarian refugees, led by Minister of Health M.L. Bonnell.[18] In addition to a reception centre which was established in Falconwood, a number of other groups participated in supporting the settlement of the Hungarians including the province's Red Cross, Women's Institute, Catholic Women's League, as well local volunteer doctors and nurses.[19]