The community of Serbian Canadians includes Canadian citizens of Serb ethnicity (by birth or descent), or people born in Serbia who permanently reside in Canada. Serbs (and Serbians) have migrated to Canada in various waves during the 20th century. The 2011 census recorded 80,320 people declaring as "Serbian", living in Canada.[2]

The first Serbs to arrive in Canada came to British Columbia between 1850 and 1870. Many were employed in mining or forestry near such towns as Phoenix, Golden, Prince Rupert and Kamloops. In Dawson City and Whitehorse names like Black Mike Winage and pioneer Milos "Big Mike" Tadich (1887-1960) became legendary. During the Great War, Tadich fought overseas with The Seaforth Highlanders of Canada along with other Serbian Canadians, most of whom were born in Montenegro and Serbia. Those who were born in Austria-Hungary were incarcerated in Ukrainian Canadian internment camps throughout the country.

By 1900, Serbs began to arrive in Alberta. Many of these early settlers had migrated north from the north-west region of the United States. Coal mining attracted them to Lethbridge, while road construction was a source of employment for those in Macleod and Cadomin. Many Serbs worked on the construction of railway lines that now extend from Edmonton to the Pacific coast. Others were interned in labor camps as "enemy aliens" simply because they were born under the scepter of Austria-Hungary, an empire at war with the United Kingdom and Serbia during World War I. Luigi von Kunits, who was living and working in Toronto at the time, was one of its victims having to identify himself regularly at the police station throughout the war years.

Čedomilj Mijatović became very active at the beginning of the First World War. He wrote many letters and articles to British dailies but his most remarkable action in this field was his visit to the United States and Canada. He was accompanied by the most famous British suffragette, Emmeline Pankhurst, who championed the causes of Britain's small allies (Belgium and Serbia) during World War I. A visit to the United States of America and Canada with such a well-known person caused such a sensation, brought crowds to Mijatović's lectures, and enabled him to have well attended lectures and to give interviews to the leading dailies.[3]

The period between the two World Wars witnessed a major increase in Serbian immigration to Canada, mostly after the breakup of the Habsburg Empire. More than 30,000 Yugoslavs came to Canada between 1919 and 1939, from the Balkans, Hungary and Romania, this included an estimated 10,000 Serbs. Many of these immigrants were single, working men who had left families in their home country to seek work in Canada. The vast majority of Serbs arriving between the wars settled in Ontario or British Columbia. During this time, ties to Europe were strong and pressure from Belgrade and Ottawa resulted in certain Serbian Canadian newspapers being banned.[4] The banned newspapers were promoting communist ideas and they were mostly written by pro-Russian Yugoslavs who were not necessarily of Serbian origin.

In the twenties and thirties, two Serbian Canadians of distinction made their mark, Luigi von Kunits, the founder and conductor of the Toronto Symphony Orchestra, and James Trifunov, an Olympian athlete who earned medals for Canada.

Major changes occurred in Yugoslavia during World War II. The newly established communist government was opposed by many Serbs and Yugoslavs. Many POWs and post war refugees refused to return to their homeland to live under a communist regime. These Serbs, part of what is now called the Chetnik immigration, emigrating to Canada at this time, came from a variety of occupational backgrounds, including military and academic professions and the skilled trades. Among them were intellectuals Adam Pribićević, Miloš Mladenović, Dimitrije Najdanović. Montreal surgeon Dr. Dragutin (Drago) Papich, Professor Sava Bosnitch of the University of New Brunswick and president of the Canadian Association of Slavists (in 1972 and 1973).

In the late 1980s, Yugoslavia's communist government was on the verge of collapse. Shortly after the breakup of Yugoslavia in 1991, a large group of Serbs moved to Canada, mostly to Southern Ontario, to cities including: Toronto, Kitchener, St. Catharines, Hamilton, Niagara Falls, London and Windsor. This was a major brain drain; with educated Serbs fleeing serious economic problems and an undemocratic government.[5]

At the turn of the century the world had witnessed a massive military action by the United States and its NATO allies in the Balkans. Now theories are being raised both in Canada and America and other countries about the likely motivations behind this intervention. Serbian Canadians and Serbian Americans alike are probing the question of whether the bombing of one sovereign country by another sets a precedent for future action by NATO, and whether future American presidents, as a result of Clinton's 1999 action (bombing Serbia) and Bush's 2008 action (Kosovo), may have stumbled into a sandbox too large for their staying power and set back foreign policy not only to the Cold War but to a new Frozen War. 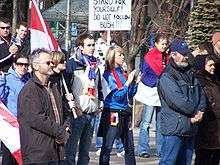 A rally against the independence of Kosovo, 2008.

On October 26, 2004 a street in Toronto was renamed to Beograd Gardens to honour Serbia's capital of Belgrade.[6] The street is located north of Eglinton Avenue and west of Marlee Avenue.[6] Beograd Gardens was unveiled by Toronto City Councillors Joe Mihevc and Howard Moscoe.[6] Recently, a boulevard in Hamilton was named after Nikola Tesla.

Officially there were 80,320 persons who identified themselves as wholly or partly "Serbian", living in Canada in 2011.[7] However, this number may be much higher as there are some 65,505 people who identify as Yugoslavs living in Canada, many of whom may be Serbs. The major center of Serbian settlement in Canada is Toronto, which is home to the 3rd largest Serb diaspora population after Vienna and Chicago; the 2006 census showed that the total of ethnic origin responses for Serbian was 25,160 while together with Yugoslav it amounted to a combined total of around 38,000.[8] Other Serbian strongholds include Windsor, Kitchener, Vancouver, Edmonton and Calgary.