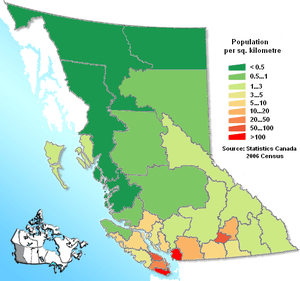 Population of British Columbia since 1851

British Columbia has a very diverse ethnic population, with a large number of immigrants having lived in the province for 30 years or less. First-generation immigrants from the British Isles remain a strong component of local society despite limitations on immigration from Britain since the ending of special status for British subjects in the 1960s. Also present in large numbers relative to other cities in Canada (except Toronto), and also present in BC ever since the province was first settled (unlike Toronto), are many European ethnicities of the first and second generation, notably Germans, Ukrainians, Scandinavians, Yugoslavs and Italians; third-generation Europeans are generally of mixed lineage, and traditionally intermarried with other ethnic groups more than in any other Canadian province. The percentages add to more than 100% because of dual responses (e.g. "French-Canadian" generates an entry in both the category "French" and the category "Canadian"). In recent decades, the proportion of those of Chinese ethnicity has risen sharply, though still outnumbered by the historically-strong population of those of German ancestry. Visible minorities have become an important factor in ethnic-based politics, though most visible minorities are less numerous than the long-standing non-British European ethnicities making up BC's "invisible minorities".

Note: The following statistics represent both single (e.g., "German") and multiple (e.g., "part Chinese, part English") responses to the 2006 Census, and thus do not add up to 100%. 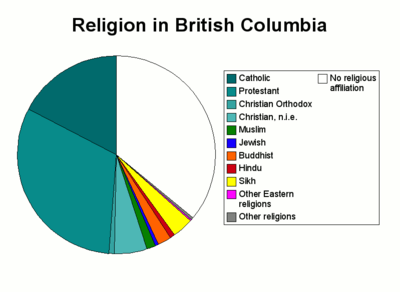 Religion in British Columbia in 2001. 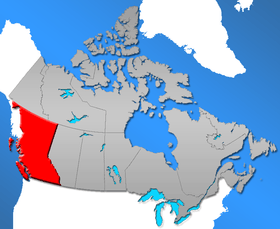