The demographics of Quebec constitutes a complex and sensitive issue, especially as it relates to the National Question of Canada. Quebec is the only province in Canada to feature a francophone (French-speaking) majority, and where anglophones (English-speakers) constitute an officially recognized minority group. According to the 2011 census, French is the First Official language spoken of more than 85.5% of the population while this number rises to 88% for children under 15 years old.[1]

Quebec is also home to "one of the world's most valuable founder populations", the Quebec Founder Population.[2] Founder populations are very valuable to medical genetic research as they are pockets of low genetic variability which provide a useful research context for discovering gene-disease linkages. The Quebec Founder Population arose through the influx of people into Quebec from France in the 17th century to mid-18th century; though this influx was large, a high proportion of the immigrants either died or returned to France, leaving a founder population of approximately 2,600 people.[2][3] About seven million Canadians (along with several million French Americans in the United States) are descendants of these original 2,600 colonists.[2]

Quebec's fertility rate is now higher than the Canadian average. At 1.74 children per woman in 2008,[5] it is above the Canada-wide rate of 1.59, and has increased for five consecutive years, reaching its highest level since 1976.[5] However, it is still below the replacement fertility rate of 2.1 children per woman. This contrasts with its fertility rates before 1960, which were among the highest of any industrialized society. For example, between 1951 and 1961, the population grew nearly 30% with minimal immigration, a natural growth rate matched today only by some African countries.

Literacy: International Adult Literacy Survey 47% Prose, 42% Document, 40% Quantitative (1996) Note: This is not the official literacy rate, and should not be used in comparisons with rates calculated using different procedures.

Percentages are calculated as a proportion of the total number of respondents (7,435,905) and may total more than 100 percent due to dual responses. Only groups with 0.06 percent or more of respondents are shown.[9]

Ethnicity according to the older more general system of classification is shown below:

Percentages are calculated as a proportion of the total number of respondents (7,125,580) and may total more than 100% due to dual responses Only groups of more than 0.02% are shown[10]

The 2006 census counted a total aboriginal population of 108,425 (1.5%) including 65,085 North American Indians (0.9%), 27,985 Métis (0.4%), and 10,950 Inuit (0.15%). It should be noted however, that there is a significant undercount, as many of the biggest Indian bands regularly refuse to participate in Canadian censuses for political reasons regarding the question of aboriginal sovereignty. In particular, the largest Mohawk Iroquois reserves (Kahnawake, Akwesasne and Kanesatake) were not counted.’’{Percentages are calculated as a proportion of the total number of respondents (7,435,905)}’’[11]

Quebec is unique among the provinces in its overwhelmingly Roman Catholic population. This is a legacy of colonial times when only Roman Catholics were permitted to settle in New France. 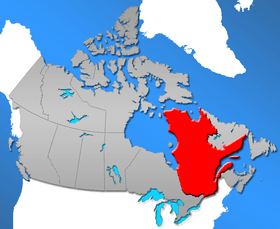