Demographics of Newfoundland and Labrador

More than half the population identified their ethnocultural ancestry as Canadian, while two-fifths identified English ancestry, and one fifth identified Irish ancestry.

The same data on ethnocultural ancestry, grouped more geographically by Statistics Canada, are shown below:

Percentages are calculated as a proportion of the total number of respondents (508,075) and may total more than 100% due to dual responses. Only groups of more than 0.02% are shown[3]

The 2006 Canadian census showed a population of 505,469.Of the 499,830 singular responses to the census question concerning mother tongue the most commonly reported languages were:

The 2006 Canadian census counted a total of 8,380 immigrants living in Newfoundland and Labrador.The most commonly reported origins for these immigrants were:[7]

There were also about 115 immigrants from Portugal; about 105 each from Hong Kong and from Sudan; about 100 from the former Yugoslavia; about 95 each from El Salvador and from France; about 85 from Iraq; and about 75 each from Sri Lanka and from Russia.

A total of 41,840 people moved to Newfoundland and Labrador from other parts of Canada between 1996 and 2006 while 79,125 people moved in the opposite direction. These movements resulted in a net outmigration of 18,820 people to Alberta, 9,900 to Ontario 4,690 to Nova Scotia, 1,615 to British Columbia, 940 to Saskatchewan, 825 to the Northwest Territories, and 700 to Prince Edward Island; and a net influx of 690 people from Manitoba. During this period there was also a net outmigration of 580 francophones to Quebec and 230 francophones moving to Ontario, and a net influx of 320 anglophones from Quebec. (All net inter-provincial movements of more than 500 persons and all official minority movements of more than 100 persons are given.)[8][9]

Ten Largest Urban Areas in the province by population[10] 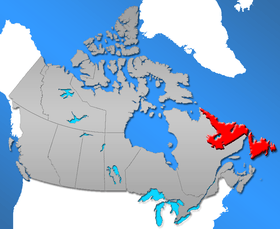