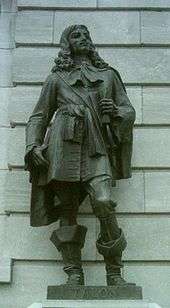 Jean Talon, statue in front of the Quebec Parliament Building

The 1666 census of New France was the first census conducted in Canada (and indeed in North America). It was organized by Jean Talon, the first Intendant of New France, between 1665 and 1666.

Talon and the French Minister of the Marine Jean-Baptiste Colbert had brought the colony of New France under direct royal control in 1663, and Colbert wished to make it the centre of the French colonial empire. To do this he needed to know the state of the population, so that the economic and industrial basis of the colony could be expanded.

Jean Talon conducted the census largely by himself, travelling door-to-door among the settlements of New France. He did not include Native American inhabitants of the colony, or the religious orders such as the Jesuits or Recollets.