Polish Canadians are citizens of Canada with Polish ancestry, and Poles who immigrated to Canada from abroad. According to the 2011 Census by Statistics Canada, there were 1,010,705 Canadians who claimed full or partial Polish ancestry,[1] an increase compared to the 984,585 recorded in 2001.[3]

The first Polish immigrant on record, Dominik Barcz, came to Canada in 1752. He was a fur merchant from Gdańsk who settled in Montreal. He was followed in 1757 by Charles Blaskowicz, a deputy surveyor-general of lands. In 1776 arrived army surgeon, August Franz Globensky. His grandson, Charles Auguste Maximilien Globensky, was elected to the House of Commons in Ottawa in 1875.

Among the earliest Polish immigrants to Canada were members of the Watt and De Meuron military regiments from Saxony and Switzerland sent overseas to help the British Army in North America. Several were émigrés from Poland who took part in the November Uprising of 1830 and the 1863 insurrection against the Russian occupation of their own homeland.[4] 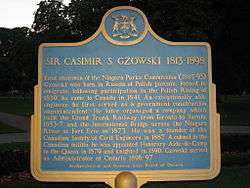 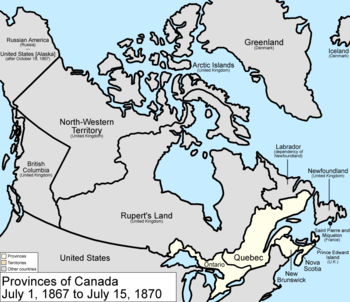 In 1841, Casimir Stanislaus Gzowski arrived in Canada from the partitioned Poland via the US, and for 50 years worked in the engineering, military and community sectors in Toronto and Southern Ontario, for which he was knighted by Queen Victoria. His great-grandson, Peter Gzowski, became one of Canada's famous radio personalities.

Charles Horecki immigrated in 1872. He was an engineer with the cross-Canada railway construction from Edmonton to the Pacific Ocean through the Peace River Valley. Today, a mountain and a body of water in British Columbia are named after him.

Polish immigration stopped during World War I and between the wars, over 100,000 Polish immigrants arrived in Canada.[5]

The first significant group of Polish group-settlers were Kashubians from Northern Poland, who were escaping Prussian oppression resulting from the occupation. They arrived in Renfrew County of Ontario in 1858, where they founded the settlements of Wilno, Barry’s Bay, and Round Lake. By 1890 there were about 270 Kashubian families working in the Madawaska Valley of Renfrew County, mostly in the lumber industry of the Ottawa Valley

The consecutive waves of Polish immigrants in periods from 1890–1914, 1920–1939, and 1941 to this day, settled across Canada from Cape Breton to Vancouver, and made numerous and significant contributions to the agricultural, manufacturing, engineering, teaching, publishing, religious, mining, cultural, professional, sports, military, research, business, governmental and political life in Canada.

All Polish Canadians including their descendants are encouraged by organizations such as the Congress, to preserve their background and retain some ties with Poland and its people. In the past, the most significant role in the preservation of various aspects of Polish traditions and customs among the Polish communities in Canada fell for the Polish urban parishes, which retain the use of Polish language during services.[6]

The first Polish Catholic priest visited Polish immigrants in 1862 in Kitchener. The first church serving Polish immigrants was built in 1875 in Wilno, Ontario. In Winnipeg, the Holy Ghost Church was built in 1899 with the church in Winnipeg publishing the first Polish newspaper in Canada, Gazeta Katolicka in 1908.[7] In Sydney, Nova Scotia, St. Mary's Polish Parish was established in 1913 by immigrant steelworkers and coal miners, many of whom had previously formed the St. Michael's Polish Benefit Society (est. 1909). The parish remains the only Polish parish in Atlantic Canada, although there is a Polish mission (St. Faustina) in Halifax.

The first Polish-Canadian Roman Catholic bishop is Reverend Mathew Ustrzycki, consecrated in June 1985, auxiliary bishop of the Hamilton Diocese. There are Polish-Canadian priests in many congregations and orders, such as the Franciscans, Jesuits, Redemptorists, Saletinians, Resurrectionists, Oblates, Michaelites, and the Society of Christ. In addition, 80 priests serve in 120 parishes. 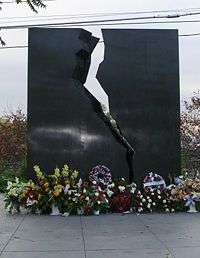 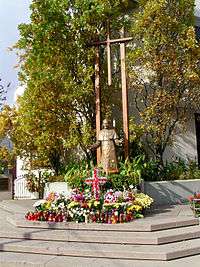 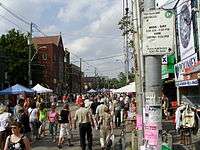 Numerous Polish-Canadians have been recognized with awards and appointments by the Queen and the Canadian governments as well as universities and various organizations. One of the most notable recipients was Andrew Mynarski, pilot-gunner from Winnipeg, awarded the Victoria Cross posthumously for extreme valor in World War II.

Polish Canadian recipients of the Order of Canada