Gobichettipalayam (also known as Gobi) is a town and municipality in the Indian state of Tamil Nadu. It is the second largest city and urban agglomeration in Erode district and is the administrative headquarters of Gobichettipalayam taluka. It is situated at the center of the South Indian Peninsula, 400 kilometres (249 mi) southwest of the state capital Chennai and 80 kilometres (50 mi) east of Coimbatore. Agriculture and textile industries contribute majorly to the economy of the town. The town is situated at 213 metres (699 ft) above sea level, surrounded by Western Ghats.

The town is a part of Gobichettipalayam constituency and elects its member of legislative assembly every five years, and a part of the Tirupur constituency that elects its member of parliament. The town is administered by a municipality established in 1949 and has a population of 60,279 as of 2011. It is known as "Mini Kollywood" because of the film shooting that takes place here and many films in Tamil and other languages have been shot here.

A major part of present Gobichettipalayam was previously known as "Veerapandi Gramam", and documents and records still use that name.[2] The town was part of the country ruled by king Vēl Pāri, who is regarded as one of the Kadai ēzhu vallal (the last seven great patrons).[3] Pariyur, a temple town near Gobichettipalayam was named after him. The land was later ruled by the Cheras and Vijayanagar empire with the town deriving its name after Gobi Chetti, a Vijayanagara Polygar.[4] It was captured by Tipu Sultan and after Tipu's defeat, British annexed it to their territory.[5]

The population is dominated by the Kongu Vellalar community.[3][8] There are a significant number of North Indians, Gurkhas, Malayalis, Uralis, Mudaliar, Vanniyar, Dalits, Nadar and Vettuva Gounders.[1][9] As per the religious census of 2011, Gobichettipalayam had 90.3% Hindus, 7.1% Muslims, 2.5% Christians and 0.1% others.[10]

The municipality of Gobichettipalayam has 67.604 kilometres (42.007 mi) of roads of which 6.6 kilometres (4.1 mi) is owned by the State Highways Department.[13] The town is well connected by roads with the following arterial roads connecting with other major towns: State Highway 81, State Highway 15, State Highway 15A. The Tamil Nadu State Transport Corporation has a depot and was in possession of 1,218 buses as of 31 March 2005. Originally known as Jeeva Transport Corporation (JTC), it came into being by the bifurcation of Cheran Transport Corporation and later became part of Coimbatore division of TNSTC. Buses ply to all major towns and cities within Tamil Nadu and neighboring state of Karnataka. KSRTC buses also connect to the town due to its proximity to Karnataka.

The nearest major railway station is Erode Junction located 38 kilometres (24 mi) from the town. A proposal to construct a railway line connecting Mysore with Erode via Gobichettipalayam was mooted during the British rule in 1915. Four official surveys were made in 1922, 1936, 1942 and as recently as 2008, but the plan failed to take off due to the concerns of railway line passing through the Sathyamangalam Wildlife Sanctuary.[14][15] The nearest airport is Coimbatore International Airport, located 74 kilometres (46 mi) from the town. The airport has regular flights from/to major domestic destinations and international destinations like Sharjah and Singapore.[16]

Western Ghats as seen from the outskirts of Gobichettipalayam

Gobichettipalayam is located in Kongu Nadu, the northwestern part of Tamil Nadu about 400 kilometres (250 mi) south west of Chennai. Western Ghats forms the border of the region resulting several hill locks and Bhavani River traverses across the region. The temperature is moderately warm in Gobichettipalayam, except during the summer months when it is very hot.[13] Rainfall is moderate to high, unpredictable and unevenly distributed.[13] The soil mainly consists of black loam, red loam and red sand.[17] In general, the soil in and around the city is fertile and good for agriculture purposes, and the surrounding waterlogged rice fields contribute to the high humidity levels.[13]

Gobichettipalayam has a good educational infrastructure. Notable schools are Diamond Jubilee Higher Secondary School, established over a 100 years ago and visited by Mahatma Gandhi and Shree Vidyalaya, which has a full-time dyslexic center.[18][19] The city is also home to Gobi Arts and Science College, one of the oldest arts colleges in the state.[20] The city itself has only a few engineering colleges, but its proximity to Coimbatore and Erode makes it an ideal educational hub.

The city is developing quickly and has been described by the government as "Bi-functional", with 31% of the work force engaged in agriculture, 56% in trading and other activities and 13% in industry.[13] A number of banks have been established in the town in recent years, testimony to the growth and prosperity of the local economy.[13] ICICI Bank established its third branch in Tamil Nadu here. The economy is predominantly dependent on agriculture.[21]

The economy of Gobichettipalayam centers on agriculture, with paddy, sugarcane, plantain, tobacco and turmeric being the principal crops.[2] The taluk is known for its lush green paddy fields which attracts cine industry. Gobichettipalayam is well known for its plantain cultivation and the production of coconuts. There are regulated market places run by the Government of India for the trade of agricultural products mainly turmeric, copra and bananas.[1]

Gobichettipalayam is one of the leading producers of silk cocoon in the country.[21] Mulberry cultivation has increased in the recent years and a silk research extension center was established by the Government of Tamil Nadu in collaboration with the Central Silk Board.[22] India's second automated silk reeling unit was established in here in 2008.[23]

A large number of spinning mills have come up in to support to the weaving and knitwear to supplement Tirupur. IT and BPO sector is also developing with a few start up companies based out of the town.[24] Other industries include cotton textiles, motors, pumps, automobile spares, textile machinery manufacturing, castings and machined parts. 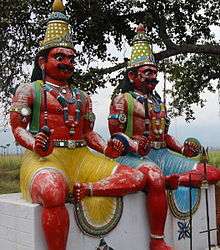 Kongu Tamil, a dialect of Tamil is the language spoken by majority of the people. English is used as an official language along with Tamil. Other languages spoken include Malayalam, Kannada and Telugu. Gobichettipalayam cuisine is predominantly south Indian with rice as its base. Most locals still retain their rural tradition, with many restaurants still serving food on a banana leaf. North Indian, Chinese and continental cuisines are also available. mysorepa (a sweet made from lentil flour) and halwa (a sweet made of different ingredients such as milk, wheat or rice) are famous. Idly, dosa, vada-sambar and biryani are popular among the locals. Coffee shops and chat centers cater to young people. 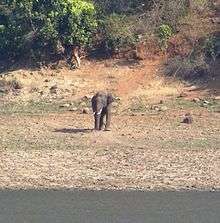 An Indian elephant in the nearby reserve forests 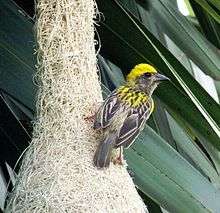 Kodiveri Dam is situated in Gobichettipalayam Taluk, about 13 km. west of Gobichettipalayam in the village of Periya Kodiveri. It was constructed by the Maharaja of Mysore in the 17th century. Two channels arise from the dam, One is on the northern side of Bhavani River and the other on the southern side viz "Arakkan Kottai Channel" and "Thadapalli Channel" respectively.[25][26] Lands north of Gobichettipalayam City are fertile due to the flow of the Thadapalli channel. Cultivation of sugarcane and paddy are predominant in this area. Kodiveri Dam is a popular tourist spot welcoming a large number of people from all over the state.

The Sathyamangalam Wildlife Sanctuary and the reserve forests of Anthiyur are about 25 km away from Gobichettipalayam. The T. N. Palayam forest range comes within the Gobichettipalayam Taluk. Abundant flora and fauna thrive in these forests which form a part of the rich biosphere of the Nilgiris. The wildlife includes Indian elephant, Bengal tiger, Indian leopard, blackbuck, spotted deer, peacock, porcupine and gaur. The area has the largest elephant population in the country.[27] The area has been proposed to be converted into a tiger reserve as per notifications from the government of India.

Another important dam that has been constructed over the Bhavani River is the Bhavanisagar Dam. It is located about 35 km from the town. The dam was completed in 1953.[28] There is a large park with various attractions drawing huge crowds towards this place.

Pariyur Kondathu Kaliamman Temple is situated in Pariyur, about 3 km from Gobichettipalayam, where a 'Fire Walking Ceremony' (Kundam) is held during January every year.[29] The annual Temple Car festival is celebrated here with grandeur, and the temple attracts a large gathering from the surrounding places all the time. Around 1500 years old,[3] the inner sanctum of the temple is made of black marble. The protector god of this temple is Maha Muniappan, who blesses couples with children and chases fear away from the minds of the people. There are many shrines dedicated to Ganesha, and shrines of Saptha Kannigai, Ponkaliamman, Brahma and other Hindu gods. The temple has a marriage hall and a golden chariot dedicated to the goddess.

Amarapaneeswarar Temple is a temple dedicated to Lord Shiva and his consort Soundaranayaki Amman located in Pariyur.[30] The temple itself is built completely of white marble and there are separate shrines dedicated to warlord Karthikeya with his wives Deivayanai and Valli, Ganesha known as Anukkai Vinayakar, Nandhi, the vehicle of Lord Shiva. There are also shrines dedicated to Navagraha, Bhairava, Nayanmars and other Hindu gods. Maha Shivaratri and Pradhosam is celebrated with much grandeur apart from other festivals of Shiva and Murugan.

Adinarayana Swamy Temple is a temple dedicated to Lord Vishnu located at Pariyur and the chief deity the temple is Adhi Narayana Perumal.[31] He is seen along with his companions Sri Devi and Bhu Devi. The specialty of the temple is that, there is a separate shrine dedicated to Lord Hanuman. The statues of Sanjeevi Anjaneyar, Veera Anjaneyar and Alwars are seen inside the main temple complex. Garuda Alwar is seen in front of the main sanctum. The main Gopuram of the temple depicts the scene of narration of Bhagavad Gita, the holy book of Hindus. Vaikunta Ekadashi and other festivals of Vishnu are celebrated here.

Balamurugan Temple, Pachaimalai is one of the two old hill temples dedicated to Lord Murugan while the other being Muthukumaraswamy Temple, Pavalamalai.[32] Both the temples are located within a few miles from the heart of the town. All Saivite, Koumaram and other Hindu festivals are celebrated at the temples, especially Thai Poosam, Panguni Uthiram and Skanda Sashti. At Pachaimalai, there is a huge statue of Lord Senthilandavar, which can been seen miles away from the temple. Apart from his normal gold peacock mount, the temple also has a golden chariot. It is believed that sage Dhurvasa initially installed the deities at both Pachaimalai and Pavalamalai.

Bannari Mariamman Temple is located at Bannari about 35 km northwest of Gobichettipalayam. The temple is dedicated to the Goddess Mariamman and attracts huge crowds round the year. The temple also has a marriage hall associated with it.