Thiru Parameswara Vinnagaram or Vaikunta Perumal Temple is a temple dedicated to the Hindu god Vishnu, located in Kanchipuram in the South Indian state of Tamil Nadu. Constructed in the Dravidian style of architecture, the temple is glorified in the Divya Prabandha, the early medieval Tamil canon of the Azhwar saints from the 6th–9th centuries AD. It is one among the 108 Divyadesam dedicated to Vishnu, who is worshipped as Vaikuntanathan and his consort Lakshmi as Vaikundavalli.

The temple is believed to have been built by the Pallava king Nandivarman II (720-96 CE), with later contributions from Medieval Cholas and Vijayanagar kings. The temple is surrounded by a granite wall enclosing all the shrines and water bodies of the temple. Vaikuntanathan is believed to have appeared to king Viroacha. The temple follows Vaikasana Agama and observes six daily rituals and two yearly festivals. The temple is maintained and administered by the Hindu Religious and Endowment Board of the Government of Tamil Nadu. The temple is one of the prominent tourist attractions in the city.[1]

As per Hindu legend, the region where the temple is located was called Vidarbha Desa and ruled by a king named Viroacha. Due to his misdeeds in preceding birth, Virocha had no heir. He prayed in Kailasanathar Temple and Shiva, the presiding deity of the temple gave a boon that the Dvarapalas (the gatekeepers) of the Vishnu temple will be born as sons to him. The princes were devoted to Vishnu and conducted yagna for the welfare of the people of their kingdom. Vishnu was pleased with the worship and appeared as Vaikundanatha to the princes.[2] 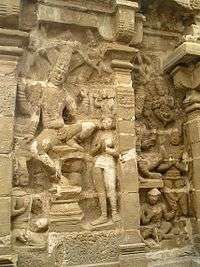 Sculptures on the walls of the temple

As per Dr. Hultzh, Parameswara Vinnagaram was constructed by the Pallava King Nandivarman II in 690 CE, while other scholars place it in the late 8th century.[3] Pallavamallan was a worshipper of Vishnu and a great patron of learning. He renovated old temples and built several new ones. Among the latter was the Parameswara Vinnagaram or the Vaikunta Perumal temple at Kanchipuram which contains inscribed panels of sculpture portraying the events leading up to the accession of Pallavamalla to the throne. The great Vaishnava saint Thirumangai Alvar was his contemporary.[4][5][6]

Three sanctuaries host the image of Vishnu in different postures - seated (ground floor), lying (first floor; accessible to devotees only on ekadashi days) and standing (second floor; inaccessible to devotees). The logical and complex plan of the temple provided a prototype for the much larger shrines to be constructed all over Tamil Nadu. The external cloisters, for instance, with their lion pillars, are predecessors of the grand thousand pillared halls of later temples.[2] 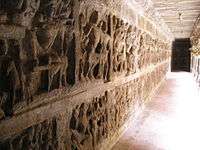 Sculptures in the walls of the temple around the corridor

The temple follows Vaikasana Agama. The temple priests perform the pooja (rituals) during festivals and on a daily basis. Like other Vishnu temples of Tamil Nadu, the priests belong to the Vaishnavaite community, a Brahmin sub-caste. The temple rituals are performed six times a day: Ushathkalam at 7:30 a.m., Kalasanthi at 8:00 a.m., Uchikalam at 12:00 p.m., Sayarakshai at 5:00 p.m., Irandamkalam at 6:00 p.m. and Ardha Jamam at 7:30 p.m. Each ritual has three steps: alangaram (decoration), neivethanam (food offering) and deepa aradanai (waving of lamps) for both Vaikuntanathan and Vaikundavalli. During the last step of worship, religious instructions in the Vedas (sacred text) are recited by priests, and worshippers prostrate themselves in front of the temple mast. There are weekly, monthly and fortnightly rituals performed in the temple. The Vaikasi Brahmotsavam, celebrated during the Tamil month of Vaikasi (May–June), and Vaikunta Ekadashi celebrated during the Tamil month of Margazhi (December–January) are the two major festivals celebrated in the temple. Verses from Nalayira Divya Prabandham are recited by a group of temple priests amidst music with nagaswaram (pipe instrument) and tavil (percussion instrument).[2]