The Thirupuliyur Mahavishnu Temple is a Hindu temple dedicated to Vishnu and located in Puliyoor, Alappuzha District, Kerala, South India. Constructed in the Kerala style of architecture, the temple is glorified in the Divya Prabandha, the early medieval Tamil canon of the Azhwar saints from the 6th–9th centuries AD. It is one of the 108 Divyadesam dedicated to Krishna, an avatar of Vishnu, who is worshipped as Imayavarappan. The nearest railway station to the temple is located in Chengannur, while the nearest airport is Trivandrum International airport. 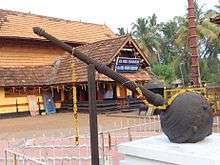 An image of Gada, the weapon of Bheema in the precincts of the temple

It is one of the five ancient shrines in the Chengannur area of Kerala, connected with the legend of Mahabharata. Legend has it that the Pandava princes, after crowning Parikshit as king of Hastinapura left on a pilgrimage. On arriving on the banks of river Pamba, each one is believed to have installed a tutelary image of Krishna; Thrichittatt Maha Vishnu Temple by Yudhishthira, Puliyur Mahavishnu Temple by Bheema, Aranmula Parthasarathy Temple by Arjuna, Thiruvanvandoor Mahavishnu Temple by Nakula and Thrikodithanam Mahavishnu Temple by Sahadeva.[1][2]

It is said that this sthalam is constructed and built by Bhima, one of the Panja - Paandavaas.[3] He worshipped this sthalaperumal, Maayapiraan. Sapta Rishis - Atthri, Vasishtar, Kaasyapar, Gouthamar, Bharadwajar, Vishvamitra and Jamadagni got the seva of this Maayapiraan along with porkodi Naachiyaar and through Indra, it is said that all these Saptarishis got their Mukti towards the Emperumaan.[4]

Once, Virukshadharbi, who was the son of Sibhi Chakravarthy, ruled an empire where there was flood and there was no proper vegetation and the wealth and the beauty of the entire empire seems to be decreasing. At that time, the king thought, if any Dhaanam (things that are given to any rishis,devotees to increase any thing) is given to Sapta Rishis, it might increase the wealth and beauty of the Empire. As a result of this, he thought of giving the Dhaanam to Saptha rishis. But, Sapta Rishis did not accept his Dhaanam, Since if any flood (or) decrease in the wealth and health in the entire empire is due to some reasons of the ruling king. So, they found some problem might by with virukshadherbi and did not accept the Dhaanam. 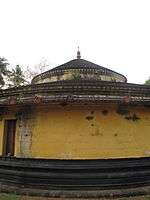 Image of the Sreekoil, the sanctum

But, he wants them to accept his Dhaanam, and as a result of this, he asks his palace officials to keep some gold inside the fruits and give them that, so that they will accept that and simultaneously his Dhaanam is also accepted. But, knowing the truth that some golds are placed inside the fruit through their yogic power, they did not accept the fruits also.

After the fruits which are given as Dhaanam is being rejected by the Sapta Rishis, Virukshadharbi got angry on all 7 rishis and tried them to kill and as a result of this cruel mind, he started an Yaagam in which a lady Pishacha by named "Kiruthyai" arose and he ordered the demon to kill all the sapta Rishis. Knowing this, Emperumaan sends Indra to destroy Kiruthyai and to protect the Sapta Rishis. Likewise, Indra killed the demon and all the Sapta Rishis got the seva of the Emperumaan and got their Mukthi.

During Mahabharata war, Bhima underwent penace worshipping the lord here. Bheema was the powerful among the five brothers and this temple is large indicating his largess. Also the Gatha, the weapon used by Bheema is believed to be present in the temple.(this Gatha was recently placed in the temple)

Earliest references to this temple appear in the poems and hymns composed by the greatest of Alvar saints - Nammalvar, in circa 800 AD. Stone inscriptions in the temple date it back to the Second Chera Empire (800 - 1102 AD).[5] Another of the Azhwars, ThirumangaiAzhwar has mentioned Thirupuliyur in one of his verses in his Siriya Thirumadal(2673,71).