Thirukkadigai or Sholingapuram in Sholinghur, a village in Vellore district of the South Indian state of Tamil Nadu, is dedicated to the Hindu god Vishnu. Constructed in the Dravidian style of architecture, the temple is glorified in the Divya Prabandha, the early medieval Tamil canon of the Azhwar saints from the 6th–9th centuries AD. It is one of the 108 Divyadesam dedicated to Vishnu, who is worshipped as Lakshmi Narasimhar and his consort Lakshmi as Thirumamagal.[1] There are three separate shrines of Vishnu in the form of Narsimha, Bhaktavatsala Perumal and Hanuman (Anjaneya). They are situated on the larger hill, at the base of the larger hill and on the smaller hill respectively.

A granite wall surrounds the temple, enclosing all its shrines uphills. The temple has a five-tiered rajagopuram at the top of hill, while the temple tank is located opposite to the temple, outside the main entrance in the foothills. The temple follows Thenkalai tradition of worship. Six daily rituals and many yearly festivals are held at the temple, of which the Karthikai festival during November - December, Brahmotsavam during the Tamil month of Chittirai (March - April), and Narasimha Jayanti during Vaikasi (May - June) being the most prominent. The temple is maintained and administered by the Hindu Religious and Endowment Board of the Government of Tamil Nadu. 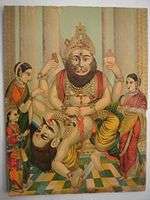 As per Hindu legend, a demon king named Hiranyakasipu was troubling the Devas (celestial deities). He obtained limitless powers from Brahma that no human can kill him, neither could he be killed in morning, noon or night nor in air, water or ground. Contrastingly, his son Prahlada was an ardent devotee of Vishnu, whom his father hated. Hiranyakasipu tried to kill Prahalada numerous times, just to be saved by the divine grace of Vishnu. During the last heated argument between the father and the son, Hiranyakasipu asked if Vishnu was present everywhere and went on to break a pillar with his weapon seeking to see Vishnu in it. Vishnu, pleased by the devotion of Prahalada, took the avatar of Narasimha and came out of the opening in the pillar. Narasimha avatar was a lion faced human and slayed Hiranyakasipu on an evening time in a doorway, which was neither land nor air.[2][3] Ages past by, when the sages were praying Narasimha to seek his blessings. They were guided by the pretext of Vishwamitra gaining the Rajarishi title with his prayers to Narasimha. The sages were troubled by demons named Kalan and Keyan in the region and they prayed to Rama, another avatar of Vishnu. Rama deployed Hanuman, his monkey lieutenant to slay the demons. Hanuman could not initially kill the demons and he prayed Narasimha to attain the holy conch and Chakra, with which he killed the demons. He also requested Narasimha to appear in Yogic posture atop the hill and he stayed in yogic posture in the opposite hill facing Narasimha.[3] 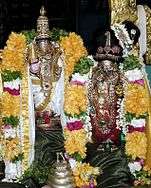 Festival images of the deity

The place was originally called as Chozhsimhapuram, which later became Sholinghar. Various scriptures quote the place as Kadigachalam or Thirukadigai as the place is believed to offer blessings to devotees with a worship lasting a Kadigai (24 minutes). Peyazhwar refers the presiding deity as "Vaan Poonkadigai Ilankumaran", while based on legend the presiding deity is also called Bhakotchita Swami. Vishnu Purana and Padma Purana refer this place as Kadigai and since Vishwamitra got his Brahmarishi title here, it became Simhapuram. The temple has many inscriptions at the foothills and also on the top of the hill. They indicate generous contributions from Kulothunga Chola III Mayuravarman and Seeyagangan. Some the inscriptions indicate that the idol Andal was newly installed as the original one was lost. Manavala Mamunigal is believed to have performed enunciation of Thirupavai at this place on the request of his disciple Erumbiappa. The town originally was under the control of Shaivites which is substantiated by the temple ruins near Parappan Kulam, in the valley between two hills. This is where original Sholinghur was situated. Unfinished Nandhis and Sthupas are found in numerous places in Sholinghur.[4] The temple is seen as one of the famous temples of Narasimha and a powerful image of Hanuman.[5] Sholingur was the scene of the battle between the British and Hyder Ali during July 1781, in which the British won.[6]

The image of the Gopuram

The temple has twin hills, with the one of Yoga Narasimha called the Periya malai (big hill) 750 ft (230 m) tall and occupying an area of 1.25 acres (5,100 m2). The top of the hill is approached through a flight of 1,305 steps. The temple at the top measures 200 ft (61 m) by 150 ft (46 m) and has a five-tiered gateway tower, the rajagopuram. Narasimha sits in a Yogic posture in a shrine facing East and is called Yoga Narasimha Swamy. The vimana, the tapering roof over the sanctum is called Hemakoti Viamanam. There is a separate shrine for his consort Amrithavalli Thayaar. Yoga Anjenayar Swamy temple of Hanuman (Anjaneya) is present in the second hill called Chinna malai (small hill) 350 ft (110 m) tall. Yoga Anjenayar is sported with chathurpujam (four hands) with a conch and chakaram in the upper hands and a Jeba malai and Jeba Shankaram in other two respectively. The image of the festival deity, Varadaraja, is housed in the lower shrine of the big hill.[4] The lower shrine has images of Bhaktavatchala Perumal and Sudavalli Thayar. There is a four pillared hall midway to the top of the hill housing the images of Doddacharya and Sudarshana. The temple tanks is called Brahmatheertham as Brahma is believed to have performed penance at this place to propitiate himself from the sins of one of his five heads getting cut by Shiva. In modern times, devotees perform rites at the temple tank seeking blessing from their forefathers.[7] The consecration of the temple was performed during September 2010 at a cost of ₹25 crore and the foundation for rope car facility was also inaugurated.[8]

Festival images of the deity and that of Hanuman

Thirukkadigai is revered in Nalayira Divya Prabhandam, the 7th–9th century Vaishnava canon, by Peyazhwar and Thirumangai Azhwar. The temple is classified as a Divyadesam, one of the 108 Vishnu temples that are mentioned in the book. Peyazhwar describes the place as the one having gardens thronged by a swam by bees.[9] The temple also finds mention in later works by Nathamuni, Thirukachi Nambi, Ramanuja and Manavala Mamunigal. During the 18th and 19th centuries, the temple finds mention in several works like 108 Tirupathi Anthathi by Divya Kavi Pillai Perumal Aiyangar.[3] Doddacharya was a Vaishnava saint believed to be the descendant of Mudaliandan. Doddacharya followed the steps of Ramanuja in advocating Vishishadvaita and maintained the temples hailed by the Azhwars. He is believed to have performed lot of miracles and impressed by his work, Achyuta Deva Raya (1529-42 CE), the relative of Krishnadevaraya gave him benovelent donations for maintenance of temples. During festival occasion in the temple like Brahmostavam, Doddacharya is given a special place in processions and also during the Garuda Sevai in Kanchipuram temple. A festival named Doddacharya Utsavam is celebrated during the Tamil month of Masi (February - March). His descendants are believed to administer the religious activities during modern times.[7] 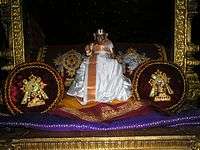 Festive image of Doddacharya, one of the proponents of Vishishadvaita philosophy

The temple follows Thenkalai tradition of worship based on Vaikasana Agamic tradition. The temple is open from 6:30 a.m. to 12 p.m. and 4:00 p.m. to 8:30 p.m. The temple priests perform the pooja (rituals) during festivals and on a daily basis. The temple priests are believed to be the descendants of Doddacharya, who follow the hereditary practises. The temple rituals are performed four times a day: Ushathkalam at 8 a.m., Kalasanthi at 10:00 a.m., Sayarakshai at 5:00 p.m. and Ardha Jamam at 8:00 p.m. Each ritual has three steps: alangaram (decoration), neivethanam (food offering) and deepa aradanai (waving of lamps) for both Yoga Narasimhar and his consort Thirumangaivalli. There are weekly, monthly and fortnightly rituals performed in the temple. Various festivals are celebrated in the temple, with the Chittirai Brahmotsavam during the Tamil of Chittirai (during April - May), Karthigai Thiruvizha during November - December and Narasimha Jayanthi during Vaikasi (May - June) being the most prominent.[3] During Brahmotsavam festival, the temple car housing the festival deities of Narasimhar and Amirtavalli is drawn around the steerts of the temple. The temple is maintained and administered by the Hindu Religious and Endowment Board of the Government of Tamil Nadu.[8]