Thrikkakara Temple is one of the few temples in India dedicated to Lord Vamana. It is situated in Thrikkakara, a village panchayat near Kochi (formerlyCochin) in the state of Kerala, South India. It is located 10 km north east of Ernakulam between Thrissur-Ernakulam highway (NH 47), Seaport-Airport Road, Cochin University of Science and Technology and Model Engineering College. The temple houses lithic records of historic significance, and it finds mention in many of the hymns sung by the Tamil Vaishnavite Alwars, particularly Nammalvar who lived 5000 years back. It is the center of celebrations and place of origin for the popular Onam festival of Kerala.[1] The temple is around two millennia old.[2] It is also listed as one of the 108 Divya Desams (divine places).[3][4]

The main temple festival is during the Onam season, which falls on the month of August or September. The most important event of the religious calendar here is Onam. The Onasadya or the Onam feast is held in a grand manner in the temple with a large number of people cutting across religious barriers participating in it. In earlier times the Onam festival was jointly organized by the 61 Naduvazhis (local rulers) under the leadership of the Maharaja of Travancore. Communal harmony continues to be the hallmark of the celebrations, with people belonging to different faiths and religions turning out in large numbers for the Sadya in keeping with the spirit of the festival.[5][6] Apart from Onam, the temple also observes important festivals in the Hindu calendar such as Vishu, Diwali, Makar Sankranti,[7] Navrathri and Saraswati Puja.

The temple complex, which is enclosed in a large area in picturesque surroundings, holds the main sanctum dedicated to Lord Vamana. The sanctum sanctorum of the main shrine houses the idol of Maha Vishnu. The idol is in the form of Lord Vamana preparing to place his foot on the Asura King Mahabali.[8] Lord Parashurama is said to have established the temple.[8] The temple also houses records containing the earliest mention of the celebration of the Onam festival dating to 861 A.D.[9] The temple is under the administration of the Travancore Devaswom Board.

The sub-deities of Vamana temple are Bhagavati, Sasthavu, Gopalakrishna, Nāga, Brahmarakshasa and Yakshi. The Brahmarakshasa shrine is located in the outer complex, along with a Banyan-tree god (ആൽദേവത) and the Sarpa Kavu. Surrounding the inner complex walls is a series of thousands of lamps called Chuttuvilakku which translates to 'surrounding lamps'. There are two ponds associated with the temple. One is the Kapilatheertham located closer to the temple on the Northern side of the sanctum sanctorum, and is accessible only to priests. The other pond is located on the Northern side outside the temple walls, and is used regularly during the Aaraattu ceremonial bath of the idol during Onam celebrations.

There is also a Shiva temple beside the main Vamanamoorthy temple, which was renovated in 2014.[2] It houses idols of the deities Shiva, Ganesha, Karthikeya and Durga. Not much is known about the age and origin of the Shiva temple except that it underwent renovation around a hundred years ago.[2]

Apart from the shrines and ponds, the temple complex houses three stages or halls for cultural performances called Naimishaaranyam, and a temple auditorium at the South-west corner. The auditorium is regularly used for weddings and meeting, and for conducting the Onam feast during the festival.

The Bhagavata Purana describes that Vishnu descended as the Vamana avatar to restore the authority of Indra over the heavens, as it had been taken by Mahabali, a benevolent Asura King. Bali was the grandson of Prahlada, the son of Virochana. King Mahabali was generous, and engaged in severe austerities and penance and won the praise of the world. With the praise from his courtiers and others, he regarded himself as the all powerful in the world.

Vamana, in the guise of a short Brahmin carrying a wooden umbrella, went to the king to request three paces of land. Mahabali consented, against the warning of his guru, Sukracharya. Vamana then revealed his identity and enlarged to gigantic proportions to stride over the three worlds. He stepped from heaven to earth with the first step, from earth to the netherworld with the second. King Mahabali, unable to fulfill his promise, offered his head for the third.

Vamana then placed his foot and gave the king immortality for his humility. In worshiping Mahabali and his ancestor Prahláda, he conceded sovereignty of Pátála, the netherworld. Some texts also report that Vamana did not step into the netherworld, and instead gave its rule to Bali. In giant form, Vamana is known as Trivikrama. The legend is associated with the temple and also with Ulagalantha Perumal Temple, Tirukoyilur and Ulagalantha Perumal Temple, Kanchipuram.[10][11][12]

Thrikkakara temple is considered to be the centre of Onam celebrations over the world, as Thrikkakara is considered to have been the abode of the King Mahabali.[1][6] The celebration of the Onam festival is the main religious event in the temple. The festival is celebrated over a period of ten days in the Malayalam month of Chingam. The temple houses the main deity Lord Vamana.[13][14] During the Onam celebration period, a pyramidal statue symbolizing Lord Vamana is installed as a symbol of honour at all other sites of the celebration, and named Thrikkakara-appan. The temple is the site at which the king Mahabali is said to have been sent to the underworld Patala by Lord Vamana with his foot, hence marking the genesis of the Onam festival. The etymology of the name Thrikkakara ('Thiru-kaal-kara' meaning 'place of the holy foot') is also derived this way. Some features of the Onam festival at Thrikkakara are 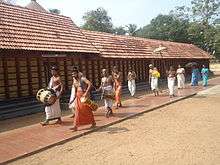