Thirumohoor Kalamegaperumal Temple (also known as Thirumohoor or Tirumogoor temple) is a hindu temple near Melur, Madurai district in the South Indian state of Tamil Nadu, is dedicated to the Hindu god Vishnu. Constructed in the Dravidian style of architecture, the temple is glorified in the Divya Prabandha, the early medieval Tamil canon of the Azhwar saints from the 6th–9th centuries AD. It is one of the 108 Divyadesam dedicated to Vishnu, who is worshipped as Neelamegha Perumal and his consort Lakshmi as Tirukannapura Nayagi. As per Hindu legend, the presiding deity is believed to have appeared as a female Mohini to lure the asuras to support Devas, the celestial deities. The temple is also known as Mohanapuram and Mohanakshetram.

A granite wall surrounds the temple, enclosing all its shrines and three of its four bodies of water. The temple has a five-tiered rajagopuram, the temple's gateway tower and a huge temple tank in front of it. The temple is believed to have been built by the Pandyas, with later additions from the Madurai Nayaks.

Six daily rituals and three yearly festivals are held at the temple, of which the Brahmotsavam, celebrated during the Tamil month of Vaikasi (April–May), being the most prominent. The temple is maintained and administered by the Hindu Religious and Endowment Board of the Government of Tamil Nadu. 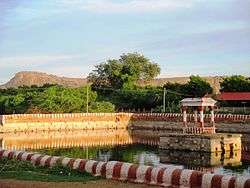 As per Hindu legend, once a demon by name Bhasmasura did penance. Shiva granted him a boon that when he touches anyone's head, the person would turn to ashes. Bhasmasura wanted to test the boon and wanted to touch the head of Shiva. A bewildered Shiva ran to seek the favour of Vishnu, who took the form of damsel Mohini. She lured Bhasmasura with her dance and made Bhasmasura touch his head with his hand. The demon Bhasmasura was thus defeated. The place where Mohini lured (meaning Moham) came to be known as Thirumohur. According to another legend, there was a fight between the Devas (gods) and Asuras (demons) during the churning of the Ocean of Milk for Amrita (ambrosia). Asuras were able to overpower Devas and the Devas sought Vishnu's help. Vishnu appeared as Mohini to lure the asuras and gave them empty pot. It is believed that Thirumohur is the place of the event.[1] 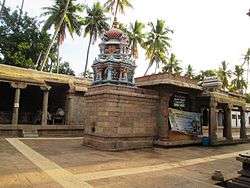 Sangam literature details about this place being prosperous during the time. The documentation from Ptolemy (c. AD 100 – c. 170) also makes reference to this place. Inscription from the temple - South Outer wall's inside - Archaeological report on Epigraphy - 330 of 1918 - and Tamil Nadu State Archaeology's Madurai District Inscriptions - Vol. I - page no. 229 - Sl. no. 141 of 2003 - identifies the builder of the temple as sri Kaala Maegam alias Kaangaeyan during the reign of Sadaiya Varman Sundhara Pandiyan (Later Pandiya king)in his regnal year 7 + 1 (i.e. after the 7th year was over and the eighth year was in progress) which is identified as AD 1259. This inscription besides identifying the above speaks of an endowment of ponds and adjoining areas duly specifying the boundaries of the land. The current structure is believed to have been built by the Madurai Nayaks. During the later part, there were additions made by the Marudu brothers, whose images are also housed in the temple. Thirumohur was an impregnable fort during the period of British. During the Carnatic Wars, there was an attempt made by a Muslim general, but it was repulsed by the local devotees. The inscriptions from the period of Nayaks have been recorded by the Archaeological survey.[1][2] 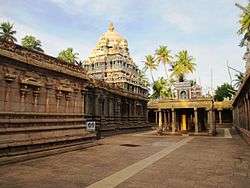 The temple is situated on a 2.5-acre (10,000 m2) land area, and has a 5 tier rajagopuram. The temple is more than 2000 years old and has been referred to in akanaṉūṟu, Padhitrupathu, maduraikanchi and also in one of the five great epics of Tamil literature, silappatikaram. There are four prakarams(closed precincts of a temple) inside the temple. The main deity (Moolavar) is Kalamegaperumal in panchayudha kolam and in a standing posture, Thayar - Mogavalli, Utsavar - Thirumogur Aabthan, Theertham - Kshirabtha Pushkarini, Thala Viruksham - Vilvam and Vimanam - Kethaki Vimanam. The Prathanasayana appearance of the main deity is not found anywhere in 108 divya desam temples. The Sudarshana Chakra of deity is famous. The temple has a five-tiered rajagopuram (gateway tower). There are columned pillars in the hall leading to the Garuda hall, which also has a small gopuram. The sanctum houses the shrine of Kalamegha and also has the images of Bhoodevi and Sridevi. The major feature is that the unlike other temples, the Devis do not touch the feet of the presiding deity. A separate shrine accommodates the image of Anantasayi Vishnu. The consort of the presiding deity, Tirumohurvalli (also called Mohanavalli) is housed in a separate shrine.[1]

The front of the Sudarshana Chakra is Chakrathazhvar and the back side is Narasingha Perumal, situated amidst 48 fairies and inside the six circles there are 16 aayuthams with 154 letters. Perumal is depicted with 16 hands and three eyes glowing like fire. The image of Chakrathazwhar in the temple is depicted with sixteen hands each holding different weapons. On the reverse side of the image, Narsimha is depicted.[3] 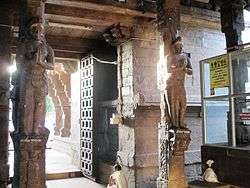 The temple priests perform the pooja (rituals) during festivals and on a daily basis based on Vaiksana Agama. As at other Vishnu temples of Tamil Nadu, the priests belong to the Vaishnavaite community, a Brahmin sub-caste. The temple rituals are performed six times a day: Ushathkalam at 7 a.m., Kalasanthi at 8:00 a.m., Uchikalam at 12:00 p.m., Sayarakshai at 6:00 p.m., Irandamkalam at 7:00 p.m. and Ardha Jamam at 10:00 p.m. Each ritual has three steps: alangaram (decoration), neivethanam (food offering) and deepa aradanai (waving of lamps) for both Kalamega Perumal and Mohanavalli. During the last step of worship, nagaswaram (pipe instrument) and tavil (percussion instrument) are played, religious instructions in the Vedas (sacred text) are recited by priests, and worshippers prostrate themselves in front of the temple mast. There are weekly, monthly and fortnightly rituals performed in the temple. The major festival is the ten-day Vaikasi Brammotsavam celebrated during May–June. The other festivals are Vaikunta Ekadasi (December–January), Gajendra Moksham during the Masi Poornima day in February – March, two day Panguni Thirukalyanam (March–April) and Krishna Jayanthi.[4]

The temple is glorified in the verses of Nalayira Divya Prabandham by Tirumangai Azhwar and Nammazhwar. The temple is classified as a Divyadesam, one of the 108 Vishnu temples that are mentioned in the book. Manavala Mamunigal, Kalamegha Pulavar, Tiruninravur Tirumalai and Pillai Perumal Iyengar have composed verses on the deity. Out of the eighteen Puranas, Brahmanda Purana and Matsya Purana make specific mention about Thirumohur.[1][5]