Ulagalandha Perumal Temple is a temple dedicated to Vishnu located in Kancheepuram, Tamil Nadu, India. Constructed in the Dravidian style of architecture, the temple is glorified in the Divya Prabandha, the early medieval Tamil canon of the Azhwar saints from the 6th–9th centuries AD. It is one of the 108 Divyadesam dedicated to Vishnu, who is worshipped as Ulagalantha Perumal and his consort Lakshmi as Amudavalli. The temple is believed to have been built by Pallavas, with later contributions from Medieval Cholas, Vijayanagar kings and Madurai Nayaks. The temple is found in Big Kanchipuram and situated close Kamakshi Amman Temple. The temple also houses four other Divya Desams namely Thirukkarvaanam, Thirukaaragam, Thiruooragam and Thiruneeragam.

As per Hindu legend, Vamana, a dwarf and one of the ten avatars of Vishnu, appeared here to quell the pride of Asura king Bali. Ulagalantha Perumal is believed to have appeared to king Mahabali and the Azhwars. Six daily rituals and a dozen yearly festivals are held at the temple, of which the chariot festival, celebrated during the Tamil month of Chittirai (March–April), is the most prominent. The temple is maintained and administered by the Hindu Religious and Endowment Board of the Government of Tamil Nadu. 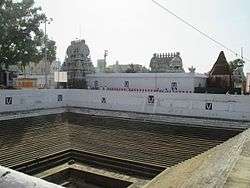 Bhagavata Purana describes that Vishnu descended as the Vamana avatar to restore the authority of Indra over the heavens, as it had been taken by Mahabali, a benevolent Asura King. Bali was the grandson of Hiranyakshipu, the son of Prahlada. King Mahabali was generous, and engaged in severe austerities and penance and won the praise of the world. With the praise from his courtiers and others, he regarded himself as the all powerful in the world. Vamana, in the guise of a short Brahmin carrying a wooden umbrella, went to the king to request three paces of land. Mahabali consented, against the warning of his guru, Sukracharya. Vamana then revealed his identity and enlarged to gigantic proportions to stride over the three worlds. He stepped from heaven to earth with the first step, from earth to the netherworld with the second. King Mahabali, unable to fulfill his promise, offered his head for the third. Vamana then placed his foot and gave the king immortality for his humility. In worshiping Mahabali and his ancestor Prahláda, he conceded sovereignty of Pátála, the netherworld. Some texts also report that Vamana did not step into the netherworld, and instead gave its rule to Bali. In giant form, Vamana is known as Trivikrama. The legend is associated with the Thrikkakara Temple in Kerala and also with this temple and Ulagalantha Perumal Temple, Tirukoyilur.[1][2][3][4]

The temple has 15 inscriptions from various dynasties like Pallavas, Chola and Sambuvarayars. The earliest inscription is from 846 CE during the regime of Nandivarman III (846 - 869 CE). There is a Chola inscription dated 1110 CE during the reign of Kulothunga Chola I (1070 - 1120 CE) indicating his visit to the temple and his gift of land to the temple whose income was to be used for the maintenance of the temple. Another similar inscription indicates the donation of a village by the king on behest of his queen Kampamadeviyar. There are inscriptions from later Chola kings like Rajathiraja Chola II (1166–78) and Rajaraja Chola III (1216-56) indicating various records of gifts to the temple. There are also inscriptions from minor chieftains like Vijaya Gandagopala indicating gifts to the temple.[5] The inscriptions refer the main deity by various names like Thiru Uragathu Ninru-arulina Paramaswamin, Thiru Uragathazhwar and Tiru uragathu Emberuman.[5][6] The Sambuvarayar rule of the 16th century records the gift of a pond and a grove in Sevvanmedu village. The temple still continues to possess this grove.[6] The inscriptions in the temple also indicate increased trade and commerce during the Pallava period, with licenses provided to shops like oil, ghee, arecanut, vegetables, flowers, coconut, sugar, cloth and sandal.[7] 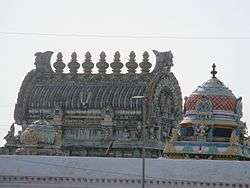 View of the ceiling of the temple

The temple has an area of about 60,000 square feet (5,600 m2) and has a three tiered rajagopuram(main towers) with seven kalasas. The temple houses four divya desams on its own - they are Thirukkarvaanam, Thirukaaragam, Thiruooragam and Thiruneeragam.[8] It is believed that all the shrines were probably separate temples, but the circumstances which lead do these temples getting housed in the Ulagalantha Perumal temple is not known.[9] Thirumangai Azhwar has sung praises of all the four temples in a single verse. The temple tank, Naga Tirtha, is located outside the main temple complex.[10]

The temple is revered by the verses of Tirumangai Alvar and Thirumazhisai Aazhwar. Thaayar of the temple is Amudhavalli (Amirthavalli) and the festival deity of the temple is Loganathan. The image of Ulagalantha Perumal is over 35 ft (11 m) in height depicted with his left leg at a right angle to the body and parallel to the ground. The right leg is seen placed on the head of Mahabali with two fingers on his left hand stretched out referring to the two steps he took to measure the two worlds and the stretched finger on his right hand indicating the question the posted to Mahabali as to where he could place his third step. The roof of the sanctum, the vimana has an elevated roof to accommodate the huge image of the presiding deity.[11]

The central shrine of temple is most commonly referred as Peragam, while the smaller shrine where the image of the snake god Adisesha is houses is called Tiruoorgam. As per traidition, Mahabali at the foot of Vamana could not view the Viswaroopam and requested to have a smaller form. Vishnu obliged and appeared as a snake in a smaller shrine. The shrine is frequented by childless couple praying for offspring.[9][10]

The shrine is located on the third precinct of the temple. As per Hindu legend, sage Garga performed his penance at this temple and obtained knowledge. The place thus derived its name Garagaham, which later became Kaaragam. The presiding deity of the shrine is Karunakara Perumal facing north and seated on Adisesha and his consort Padmamani Nachiar. The temple tank associated with it is called Agraya Tirtha and the vimana is called Vamana Vimanam or Ramaya Vimanam.[10][12]

The shrine is located in the second precinct. The presiding deity is called Kalvar and faces north, while his consort is Kamalvalli Thayar. Gauri Tatakam and Taratara Tatakam are the temple tanks associated with the temple and the vimana is called Puskala Vimana.[10][13] There is a separate for Aranavalli Thayar.[10]

The temple has no presiding deity, but just a festive image probably brought from other shrine. The images of the festival deity, Jagadiswara, facing East and having four arms, is housed in a hall in the second precinct. The water body associated with the temple is Akrura Tirtham and the vimana is Jagadiswara Vimanam. As per Pillai Perumal Aiyangar in his Nurrettrutiruppatiyantati, Vishnu revealed himself to a sage in the form of a child in a banyan leaf.[10][14] 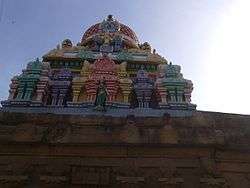 View of the ceiling of Tiruneerakam

The temple priests perform the pooja (rituals) during festivals and on a daily basis. As at other Vishnu temples of Tamil Nadu, the priests belong to the Vaishnavaite community, a Brahmin sub-caste. The temple rituals are performed six times a day: Ushathkalam at 7 a.m., Kalasanthi at 8:00 a.m., Uchikalam at 12:00 p.m., Sayarakshai at 6:00 p.m., Irandamkalam at 7:00 p.m. and Ardha Jamam at 10:00 p.m. Each ritual has three steps: alangaram (decoration), neivethanam (food offering) and deepa aradanai (waving of lamps) for both Ulagalantha Perumal and Amuthavalli. During the last step of worship, nagaswaram (pipe instrument) and tavil (percussion instrument) are played, religious instructions in the Vedas (sacred text) are recited by priests, and worshippers prostrate themselves in front of the temple mast. There are weekly, monthly and fortnightly rituals performed in the temple.[15] There are two major festivals celebrated in the temple - Brahmotsavam during the Tamil month of Thai (January - February) and Vamana Jayanthi during the Tamil month of Avani (August - September) on Sravanam star.[5]

The temple is revered in Nalayira Divya Prabandham, the 7th–9th century Vaishnava canon, by Tirumazhisai Alwar in one hymn. The temple is classified as a Divyadesam, one of the 108 Vishnu temples that are mentioned in the book.[15] The temple is unique among Divya desams as it is the only temple complex that houses four different Divyadesams.[6]