Sri Bakthavatsala Perumal temple is a Hindu temple, located at Thirunindravur, southern Indian city of Chennai, Tamil Nadu, India, is dedicated to the Hindu god Vishnu. Constructed in the Dravidian style of architecture, the temple is glorified in the Divya Prabandha, the early medieval Tamil canon of the Azhwar saints from the 6th–9th centuries AD. It is one of the 108 Divyadesam dedicated to Vishnu, who is worshipped as Bhaktavatsala Perumal and his consort Lakshmi as Ennai Petra Thayar.

The temple is believed to have been built by the Pallavas of the late 8th century AD, with later contributions from Medieval Cholas and Vijayanagar kings. A granite wall surrounds the temple, enclosing all the shrines and two bodies of water. There is a four-tiered rajagopuram, the temple's gateway tower, in the temple.

Bhatavatsala Perumal is believed to have appeared to Kubera. Six daily rituals and three yearly festivals are held at the temple, of which the Krishna Janmasthami festival, celebrated during the Tamil month of Aavani (August–September), being the most prominent. The temple is maintained and administered by the Hindu Religious and Endowment Board of the Government of Tamil Nadu.

Legend is that Varuna, Samudraraja had worshipped Vishnu at this place. It is also said that Vishnu, returning from this place followed by Lakshmi, stayed here and hence it is called Thirunindravur. It is also that Thirumangai Alvar did not sing any paasuram (songs) here and followed by Vishnu followed Thirukadalmallai and sang song praising the deity Bhaktavatsala Perumal from there. Lakshmi requested Perumal to appear before the azhwar, but when he did Azhwar had already reached Tirukannapuram. Perumal again appeared in the dreams of the Azhwar who felt that he is viewing Bhatavatsala in Tirukannapuram.[1]

The temple is built during the, and is estimated to be 1500 years old. The temple has a 5 tier gopuram at the entrance and two precincts. The Moolavar(presiding deity) of the temple is Bakthavasala. The Moolavar is at a standing position facing east. The height of the Moolavar is around 10 ft (3.0 m). The Utsavar(procession deity) is called Patharaavi is made of panchaloka and is accompanied by two consorts as in most Vaishnavite temples. There is a separate shrine for Ennai Petra Thayar also called Sudhavalli, the consort of Bakthavasala. The temple also has separate shrines for Andal, Chakkarathazhwar, the Alwars and Sri Ramanuja. On the banks of a lake a few meters behind this temple is another temple for Rama. In this temple there is a statue of Hanuman lifting Rama and Lakshmana on his shoulders. The temple is administered by the Hindu Religious and Charitable Endowments department of Tamil Nadu government. His Holiness the Pedda Jeeyar of Tirupathi is the permanent trustee of the temple.[3] 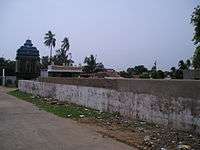 The temple follows the traditions of the Thenkalai sect of Vaishnavite tradition and follows paancharathna. The temple priests perform the pooja (rituals) during festivals and on a daily basis. As at other Vishnu temples of Tamil Nadu, the priests belong to the Vaishnavaite community, a Brahmin sub-caste. The temple rituals are performed six times a day: Ushathkalam at 7 a.m., Kalasanthi at 8:00 a.m., Uchikalam at 12:00 p.m., Sayarakshai at 6:00 p.m., Irandamkalam at 7:00 p.m. and Ardha Jamam at 8:30 p.m. Each ritual has three steps: alangaram (decoration), neivethanam (food offering) and deepa aradanai (waving of lamps) for both Bakthavatsala Perumal and Sundaravalli Thayar. During the last step of worship, nagaswaram (pipe instrument) and tavil (percussion instrument) are played, religious instructions in the Vedas (sacred text) are recited by priests, and worshippers prostrate themselves in front of the temple mast. There are weekly, monthly and fortnightly rituals performed in the temple.[4]

The temple is revered in Nalayira Divya Prabandham, the 7th–9th century Vaishnava canon, by Thirumangai alvar. The Azhwars have sung praise on the different forms of Bhaktavatsala Perumal. The temple is classified as a Divyadesam, one of the 108 Vishnu temples that are mentioned in the book. Many Acharyas have also written songs on the various forms of God in this Temple.[1]