Thirumanimadam or Narayanan Perumal Temple (also called Badrinarayana Perumal Temple) is dedicated to Hindu god Vishnu located in Thirunangur, a village in the outskirts of Sirkazhi in the South Indian state of Tamil Nadu. Constructed in the Dravidian style of architecture, the temple is glorified in the Divya Prabandha, the early medieval Tamil canon of the Azhwar saints from the 6th–9th centuries AD. It is one of the 108 Divyadesam dedicated to Vishnu, who is worshipped as Narayanan and his consort Lakshmi as Pundarikavalli.

It is one among the eleven divyadesams of Thirunangur Tirupathis and is closely associated with Thirumangai Alvar. The temple is open from 8 a.m. to 10 a.m. and 5 p.m. to 7 p.m and has four daily rituals at various times of the day. The Thirumangai Azhwar Mangalasasana Utsavam celebrated annually during the Tamil month of Thai is the major festival of the temple during which the festival images of the eleven Thirunangur Tirupathis are brought on mount designed like Garuda, called Garuda Vahana, to Thirunangur. 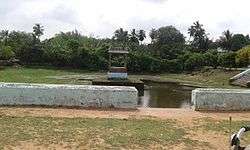 The legend of all the eleven temples of Thirunangur are closely associated with each other. As per legend, the Hindu god Shiva started dancing in fury at this place after the death of his consort Uma due to the yagna (sacrifice) of Daksha. Each time his lock of hair touched the ground, there were eleven other forms of Shiva who appeared. The celestial deities were worried that if the dance continues, it would result in decimation of entire creations. They prayed to Vishnu for help, who appeared at this place. On seeing Vishnu, Shiva's anger was reduced and he requested Vishnu to appear in eleven forms like he did. On his request, Vishnu appeared in eleven different forms at Tirunangur. The eleven places where Vishnu appeared are believed to be where the eleven temples in Tirunangur are located.[1] The eleven Rudras, called Ekadas Rudras and king of devas, Indra, are believed to have worshiped Vishnu at this temple.[2] The presiding deity of Badrinath Temple, Badrinath, is believed to have visited the place on the request of Shiva. Ramanuja is believed to have learnt Tirumandiram from Thirukoshtiyur Nambi at this place.[3]

It is located in Thirunangur, a small village, 10 km away from Sirkali en route to Thiruvenkadu. The temple tank is located right across the temple. Inscriptions from 10th-century Chola and Nayakkar periods are seen in the temple. The temple has a five-tiered rajagopuram (gateway tower) and all the shrines of the temple are enshrined in a granite wall. The central shrine is built on an elevated structure and is reached by a flight of steps. There is a hall adjacent to the right of the rajagopuram, where the festival image of the fourteen temples in Thirunangur and its surrounds are housed during the Thirumangai Azhwar Utsavam. The shrine of the consort of Narayana Perumal is located in the second precinct around the sanctum. The image of the presiding deity is sported in the sanctum in standing posture facing east. The temple tank is located opposite to the gopuram.[4]

The temple is revered in Nalayira Divya Prabhandam, the 7th–9th century Vaishnava canon, by Periazhwar, Thirumalisai Alvar and Thirumangai Azhwar. The temple is classified as a Divyadesam, one of the 108 Vishnu temples that are mentioned in the book. During the 18th and 19th centuries, the temple finds mention in several works like 108 Tirupathi Anthathi by Divya Kavi Pillai Perumal Aiyangar.[5] 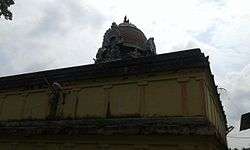 The vimanam - structure over the sanctum

The temple is open from 8 a.m. to 10 a.m. and 5 p.m. to 7 p.m. The temple priests perform the pooja (rituals) during festivals and on a daily basis. As at other Vishnu temples of Tamil Nadu, the priests belong to the Vaishnavaite community, a Brahmin sub-caste. The temple rituals are performed four times a day: Ushathkalam at 8 a.m., Kalasanthi at 10:00 a.m., Sayarakshai at 5:00 p.m. and Ardha Jamam at 7:00 p.m. Each ritual has three steps: alangaram (decoration), neivethanam (food offering) and deepa aradanai (waving of lamps) for both Narayana Perumal and his consort Pundarikavalli. During the worship, religious instructions in the Vedas (sacred text) are recited by priests, and worshippers prostrate themselves in front of the temple mast. There are weekly, monthly and fortnightly rituals performed in the temple.[5]

During the new moon day of the Tamil month Thai, the festival deity of Thirumangai Azhwar is brought to the temple from Thiruvali-Thirunagari.[6] The Thirumangai Azhwar Mangalasasana Utsavam is celebrated in the Tamil month of Thai (January–February). The highlight of the festival is Garudasevai, an event in which the festival images of the eleven Thirunangur Tirupathis are brought on mount designed like Garuda, called Garuda Vahana, to Thirunangur. The festive image of Thirumangai Azhwar is also brought on a Hamsa Vahanam (palaquin) and his paasurams (verses) dedicated to each of these eleven temples are recited during the occasion. The festival images of Thirumangai Alvar and his consort Kumudavalli Naachiyar are taken in a palanquin to each of the eleven temples. The verses dedicated to each of the eleven temples are chanted in the respective shrines. This is one of the most important festivals in the region which draws thousands of visitors.[7][6]