Thirukurungudi is a town which is located in Tirunelveli district, Tamil Nadu, South India. The taluk of Thirukurungudi is Nanguneri and it belongs to Nanguneri Assembly. At the foothills of the Western Ghats and 40 km to the North of kanyakumari and about 120 km from Thiruvananthapuram the capital city of Kerala, Thirukurungudi is a village with history dating back more than 1500 years. Village life revolves around agriculture and the Nambi Rayar temple. It is one of the 108 Divya desam, Hindu temples that are sacred for the Vaishnavites.

This is the home town of the founder, T. V. Sundaram Iyengar of TVS Group.

Rice was the major crop until 15 years ago as there was plenty of rainfall and the River Nambi fed the irrigation channels for almost 9 months a year. With advancement in technology to tap ground water and rain becoming scarce, plantains have become a major crop. Almost every household has something related to agriculture, either directly or through the Nambi Rayar temple.

The tank in Thirukurungudi is the first place where pristine water from Western Ghats is stored and fed for agriculture through five canals. The pond is a biodiversity hotspot supporting various forms of life from fish, birds, insects, plants, toads and an occasional python.

Nambi Rayar temple is one of the "108 Divyadesams" according to the Vaishnava mythology. The temple is 1300 years old.[1] The temple is located in the centre of the town flanked by four big Mada Veethis (Agraharams) and at the outer square by four broad and lengthy Ratha Veethis (Car Streets). The presiding deity of this Divya Desam was sung (Mangalasasanam) by four Azhwars, namely Thirumazhisai Piran, Nammalvar, Periazhwar and Thirumangai Azhwar.[2] The temple has several unique sculptures. A Horse and an elephant sculpture are composed of ladies in a single granite stone.[3]

The walls of the temple resemble a big fort and the village has been formed around these walls in a very organized manner.The interiors of the main temple tower is covered with wood sculptures of teak depicting most of the deities as well as other secular scenes.

There are five Nambis in this Kshetram. They are Ninra Nambi (Standing posture), Irundha Nambi (Sitting posture), Kidandha Nambi (Sleeping posture),[1] Thiruparkadal Nambi and Thirumalai Nambi. Thiruparkadal Nambi Temple is located very near to the River Nambiyaru one km from the main temple. Thirumalai Nambi Temple is on the hills (Mahendragiri Mountain) 8 km from the main temple. In Tamil language the word "nambi" means personification of all virtuous and righteous qualities blended with beauty and grace.

Thirukurungudi is a very ancient village referred in Varaha Purana and Brahmanda Purana. Kaisika Puranam is within Varaha Puranam and was narrated by Varaha Nainar (Third incarnation of Lord Mahavishnu) to Sri Bhoomi Devi. Nampaduvan (Madangar) was a great devotee of Lord Nambi, though he was born in a very low class society. He used to sing in praise of the Lord Nambi. One day, on Sukla Ekadasi night in the month of Karthigai (Vrichika masam), he was going to Temple crossing through a dense forest. He was encountered by a Brahma Rakshas (Demon) who was hungry for many days. On seeing Nampaduvan, Brahma Rakshas was very happy and told him that he wanted to eat him immediately. Nampaduvan was not terrified, but told Brahma Rakshas that he would finish his duty first, that is to sing in praise of Lord Nambi and would return without fail. Nampaduvan made many promises, but Rakshas was adamant. Ultimately Nampaduvan had made a promise that if he did not return, he would get the sin of those who equate Lord Maha Vishnu with other deities. On hearing this promise Brahma Rakshas was very much satisfied and allowed Nampaduvan to do his duty and return.[4]

Then Nampaduvan went to Rakshas and offered himself to be eaten by Rakshas. Rakshas was very much moved by the behaviour of Nampaduvan and told him that his hunger had vanished and prayed him to give the fruits of his song sung in the praise of Lord Nambi and persisted him several times. Nampaduvan did not budge an inch, but ultimately offered him the fruits of his song since Brahma Rakshas totally surrendered. After obtaining the fruits of the song, the sin of Rakshas disappeared suddenly and he got his original image. He worshiped Nampaduvan and thanked him by saying that he was a Brahmin by name Soma Sarma in his previous birth and because of some irregularities while performing yagna he was cursed to become a Brahma Rakshas and now he had been redeemed by Nampaduvan.

This episode is being enacted in the Temple premises every year on the Ekadasi day of Sukla paksha Karthigai by the traditional performers who observe vratha for ten days. On the next day in the early morning of Dwadasi Kaisika Puranam is read out in front of Lord Nambi. 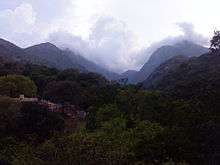 Malai Nambi Koil is a beautiful mountain, 8 km from Thirukurungudi village. It is a small mountain where auto, two wheelers can be hired from the foot hill. There are few steps that will take to the temple entrance. Small waterfall makes devotees fresh before going to the temple. Lord Nambi with Bhoo Devi and Sri Devi shows grace on the devotees in standing posture.

Mahendragiri mountain near Tirukurungudi has abundant medicinal herbals. This mountain is mentioned in the First Chapter of Srimad Valmiki Ramayanam Sundara Kandam. Hanuman while going to Sri Lanka in search of Seetha set his feet here and then travelled by sky route. There are many Siddha Purushas living in this mountain observing penance. ISRO is in Mahendragiri Hills 17 km from Thirukkurungdi.