Ulagalantha Perumal Temple is a Hindu temple dedicated to Vishnu located in Tirukkoyilur, Tamil Nadu, India. Constructed in the Dravidian style of architecture, the temple is glorified in the Divya Prabandha, the early medieval Tamil canon of the Azhwar saints from the 6th–9th centuries AD. It is one of the 108 Divyadesam dedicated to Vishnu, who is worshipped as Ulagalantha Perumal and his consort Lakshmi as Poongothai.[1] The temple is believed to have been built by the Medieval Cholas, with later contributions from Vijayanagar kings and Madurai Nayaks. The temple covers an area of 5 acres (20,000 m2) and has a temple tower that is the third tallest in Tamil Nadu, measuring 192 ft (59 m) in height.

As per Hindu legend, Vamana, a dwarf and an avatar of Vishnu, appeared here to quell the pride of Asura king Bali. The temple is believed to be the place where the first three Azhwars, the Vaishnava saints, namely, Poigai Alvar, Bhoothathalvar and Peyalvar attained salvation. The temple is one of the Panchakanna (Krishnaranya) Kshetrams, the five holy temples associated with Krishna, an avatar of Vishnu.

Ulagalantha Perumal is believed to have appeared to king Mahabali and the Azhwars. Six daily rituals and a dozen yearly festivals are held at the temple, of which the chariot festival, celebrated during the Tamil month of Chittirai (March–April), is the most prominent. The temple is maintained and administered by the Hindu Religious and Endowment Board of the Government of Tamil Nadu. 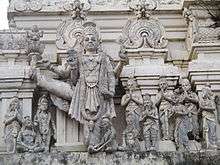 The Bhagavata Purana describes that Vishnu descended as the Vamana avatar to restore the authority of Indra over the heavens, as it had been taken by Mahabali, a benevolent Asura King. Bali was the grandson of Hiranyakshipu, the son of Prahlada. King Mahabali was generous, and engaged in severe austerities and penance and won the praise of the world. With the praise from his courtiers and others, he regarded himself as the all powerful in the world. Vamana, in the guise of a short Brahmin carrying a wooden umbrella, went to the king to request three paces of land. Mahabali consented, against the warning of his guru, Sukracharya. Vamana then revealed his identity and enlarged to gigantic proportions to stride over the three worlds. He stepped from heaven to earth with the first step, from earth to the netherworld with the second. King Mahabali, unable to fulfill his promise, offered his head for the third. Vamana then placed His Foot and gave the king immortality for his humility. In worshiping Mahabali and his ancestor Prahláda, he conceded sovereignty of Pátála, the netherworld. Some texts also report that Vamana did not step into the netherworld, and instead gave its rule to Bali. In giant form, Vamana is known as Trivikrama. The legend is associated with Thrikkakara Temple in Kerala, but also with this temple and Ulagalantha Perumal Temple, Kanchipuram.[2][3][4] 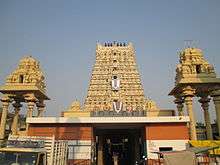 Image of the second gateway tower

The temple has an eleven-tiered rajagopuram with a height of 192 ft (59 m), the third tallest temple tower in Tamil Nadu, after the one in Srirangam Ranganathaswamy temple and Srivilliputhur Andal Temple. The temple covers an area of 5 acres (20,000 m2) and houses residential buildings in the precincts around the temple tower. The presiding deity, Ulagalantha Perumal, has an imposing image made of Tharu wood with foot raised. The images of Azhwars are housed in the hall preceding the sanctum. A number of water bodies are associated with the temple. Chakra Theertha, the temple tank located outside the temple is believed to have been from the waters used by Brahma to wash the feet of Vamana. It is believed that the water is source of river Pennar, which flows nearby the temple. Chank Theertha, located in the east, Akasha Ganga, Varava Theertha and Kalava Theertha are the various other temple tanks in the temple. The image of Krishna is made of saligrama stone and is housed in a separate shrine. There are separate shrines in the first precinct for Venugopala, Lakshmi Narayana, Lakshmi Raghava, Lakshmi Narasimha, Rama, Veera Anjaneya, Andal and Shukracharya, the Guru of Asuras. Durga, otherwise housed only in Shiva temples, is a rare feature of the temple.[4]

The temple was originally made of bricks, but during the period of Virarajendra Chola (1063–70), a granite structure was developed. Narasimha Varma constructed the other shrines also in granite. The temple received benevolent contributions from most of the later Chola rulers like Rajadhiraja Chola (1018–1054), Rajendra Chola II (1051–1063) and other rulers of the region like Vikramapandiya, Koperujinga and Vijayanagara rulers like Saluva Narasimha Deva Raya (1485–1491) and Sadasiva Raya (1542–1570) as seen from the inscriptions in the temple. The temple was expanded during the rule of the Vijayanagar kings and Nayaks. The temple was the fortress to the British during the Carnatic wars. It was also attacked during the days of the period of Hyder Ali.[5] 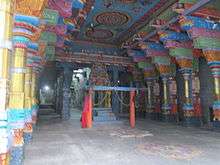 Image of the Thayar shrine

The temple priests perform the pooja (rituals) during festivals and on a daily basis. As at other Vishnu temples of Tamil Nadu, the priests belong to the Vaishnavaite community, a Brahmin sub-caste. The temple rituals are performed six times a day: Ushathkalam at 7 a.m., Kalasanthi at 8:00 a.m., Uchikalam at 12:00 p.m., Sayarakshai at 6:00 p.m., Irandamkalam at 7:00 p.m. and Ardha Jamam at 10:00 p.m. Each ritual has three steps: alangaram (decoration), neivethanam (food offering) and deepa aradanai (waving of lamps) for both Ulagalantha Perumal and Poongothai. During the last step of worship, nagaswaram (pipe instrument) and tavil (percussion instrument) are played, religious instructions in the Vedas (sacred text) are recited by priests, and worshippers prostrate themselves in front of the temple mast. There are weekly, monthly and fortnightly rituals performed in the temple.[4]

The temple is revered in Nalayira Divya Prabandham, the 7th–9th century Vaishnava canon, by Tirumazhisai Alwar in one hymn. The temple is classified as a Divyadesam, one of the 108 Vishnu temples that are mentioned in the book.[4]

This temple is one of the Panchakanna (Krishnaranya) Kshetrams. Kannan refers to Krishna, the avatar of Vishnu, while pancha means five and Kshetrams refers to holy places. Four of the five temples are situated in Chola Nadu, in modern times, in the region surrounding Kumbakonam and Nagapattinam and one of them in Nadu Nadu. Krishna is not the presiding deity in any of the temples. The processional deity, Krishna, led to the derivation of the names of these places. There are five similar temples located in North India, called Pancha-dvarakas.[5][6] 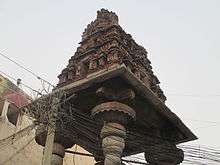 As per Hindu legend, Vishnu appeared to the mudhal azhwars (first three azhwars) at Thirukkoilur. It was day time, but it darkened and started raining heavily. The wandering Poigai Azhwar found out a small hide out, which has a space for one person to lie down. Boodathazhwar arrived there looking for a hiding place and Poigai accommodated him, with both sitting together. In the meanwhile, Peyazhwar also came to the same place as all the three preferred to stand because of lack of space. The darkness became dense and inside the small room, they were not able to see each other. In the meanwhile, they felt a fourth person also forced his way among them. The three azhwars realised from the light of the lightning that the fourth one had a charming face that was sublime and divine. The trio could immediately realize that it was Vishnu who was huddling among them. Poigai wished to see Vishnu's face continuously but could view only from the simmering light of the lightening. With a view to maintain the continuity of light, he instantly composed hundred songs wishing the earth to be a big pot full of ghee like an ocean where the Sun could be the burning wick.[5][7][8][9]

The song is also interpreted as the azhwar praying to god to remove the darkness and ask for his unlimited knowledge and power. Bhoothathazhwar also sang 100 songs imagining to light the lamp constantly through ardent love for Him. Peyazhwar sang another 100 songs where he described the enchanting charm of the divine face and the association of Narayana equipped with chakra and sankha, and his divine consort goddess Lakshmi.[7][11]

The temple finds mention in Sangam literature in Tamil from 3rd BC to 3rd centuries CE. Agananuru, Purananuru, Natrinai and Kurunthogai have mention about the temple. Malayaman Tirumudikari, the ruler of Thirukovilur, was lavished praise in the texts for his charitable disposition to the institutions. It is believed that Avvayar, the celebrated Sangam period poet, arranged marriage for two cheiftians at this place. Poet Kapilar is believed to have found suitable grooms for king Pari's daughter Angavai and Sangavai at this place and set himself up in fire. The event is commemorated every year in a huge rock called Kapilar Kal, where a small shrine exists even in modern times.[5]