Pandavathootha Perumal Temple or Thirupadagam located in Kanchipuram in the South Indian state of Tamil Nadu, is dedicated to the Hindu god Vishnu. Constructed in the Dravidian style of architecture, the temple is glorified in the Divya Prabandha, the early medieval Tamil canon of the Azhwar saints from the 6th–9th centuries AD. It is one of the 108 Divyadesam dedicated to Vishnu, who is worshipped as Pandava Thoothar Perumal and his consort Lakshmi as Rukmini.

The temple is considered one of three oldest temples in Kanchipuram, the other two being Ulagalantha Perumal Temple and Yathothkari Perumal Temple. The temple is believed to have been built by the Pallavas of the late 8th century AD, with later contributions from Medieval Cholas and Vijayanagar kings. The temple has three inscriptions on its walls, two dating from the period of Kulothunga Chola I (1070–1120 CE) and one to that of Rajadhiraja Chola (1018-54 CE). A granite wall surrounds the temple, enclosing all the shrines and two bodies of water. There is a four-tiered rajagopuram, the temple's gateway tower, in the temple.

Pandava Thoothar is believed to have appeared to Pandavas. Six daily rituals and three yearly festivals are held at the temple, of which the Krishna Janmashtami festival, celebrated during the Tamil month of Aavani (August–September), being the most prominent. The temple is maintained and administered by the Hindu Religious and Endowment Board of the Government of Tamil Nadu.

Stucco images on the Gopuram of the temple

As per Hindu legend, the temple is associated with a chapter in Mahabharata when Krishna went to the Kauravas as a missive (called Thoota locally) to the Pandavas. Duryodhana, the king of the Kouravas, had a plan to arrest and kill Krishna while he was in Hastinapura. He dug a deep pit and covered it with a carpet and a chair studded with gems. He had wrestlers hidden in the pit to wrangle Krishna. Krishna, being the avatar of Vishnu portrayed Vishvarupa, a giant form to all the courtment and also to Dhritarashtra, the blind king and father of Duryodana.[1][2][3] When Krishna offered a boon to Dhritarashtra, he requested Krishna to make him blind again as he did not want to see anything after seeing the Vishwaroopa.[4] Krishna also appeared in the same form to Janamajeya, the great-grandson of Arjuna, who was doing penance to view god in Viswaroopa.[2][3] Pada means big and Agam means residence, signifying Thirupadagam as the place where Vishnu resides with his giant form.[4] 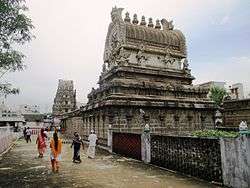 Image of the vimana

The temple is considered one of three oldest Vishnu temples in Kanchipuram, the other two being Ulagalantha Perumal Temple and Yathothkari Perumal Temple. The temple is originally believed to be built during the period of Pallavas. The temple has a set of inscriptions associated with Cholas. A record of the Chola king, Rajakesari Varaman alais Kulothunga Chola I, dated in his fifth year. Records that a merchant provided the temple with a flower garden and purchased from the village of Ovirukkai some lands for the benefit of the gardeners. The cost of the 2,000 kulis(tax-free) was 11 kalanjus equal in finesse of Madhuranthaka madai and the assembly could not levy in consequences vellikasu, nirallai, silvari, sorumattu etc. The south wall of the temple has inscriptions of Kulothunga Chola I, dated in his 39th year. Records gift of two kalanjus and two manjadi by a merchant to the pujari(temple priest) who were to supply two malis of curd daily.[5][6] There are inscriptions on the base of the western wall of the central shrine from the period of Rajadhiraja Chola II (1166-78 CE) indicating gifts of 32 cows for lighting lamps of the temple.[4]

There is a Sanskrit inscription on the walls of Sundaravarada Perumal Temple in Uthiramerur indicating the expertise of an architect named Paramesvara who is an expert in constructing temples. He is believed to have hailed from Padagam and he might have contributed to the construction of this temple as well.[6] The temple is maintained and administered by the Hindu Religious and Endowment Board of the Government of Tamil Nadu. 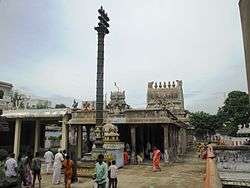 Image of the vimana

The temple is located in Big Kanchipuram near the Ekambareswarar Temple.[7] The main entrance of the temple faces east and the temple has a rectangular plan. The temple has a four-tiered rajagopuram and a single precinct enclosed in the walls. The Maha mandapa is believed to have been built by the Cholas, while the adjacent hall during the period of Vijayanagara Empire. The central shrine of the temple has a large image of the presiding deity Pandava Thoothar, which has a height of 25 ft (7.6 m). Such a large historical image of Krishna is one of its kind.[4] The deity is seen seated in Arda Padmasana posture with his right leg bent to the basement. Since Krishna appeared as human form, there are only two hands to the deity, unlike other temples, where the presiding deities have four or more hands. The right palm depicts the Abhaya Mudra for protection and the left arm depicts Varada Mudra for giving boon.[8] The shrine faces east and the vimana of the temple is called Bhadra Vimana.[9] The preceding hall to the main sanctum, Mukha Mandapa, has bronze images of the festival deities of the temple and Azhwars. The most prominent of them is of Arulala Permula Emburamanar, the disciple of Ramanuja, whose image is rarely found in other Vishnu temples.[6] The Shrine of Rukmini is located to the south of the main shrine and has the image of Rukmini. There are modern additions like Chakrathazhwar with an image of Narasimha on it reverse located behind the main shrine. Matsya Theertham, the temple tank, is located on the northeastern side of the temple.[8]

Image of the vimana of the Thayar shrine

The temple follows the traditions of the Thenkalai sect of Vaishnavite tradition and follows vaikanasa aagama. The temple priests perform the pooja (rituals) during festivals and on a daily basis. As at other Vishnu temples of Tamil Nadu, the priests belong to the Vaishnavaite community, a Brahmin sub-caste. The temple rituals are performed six times a day: Ushathkalam at 7 a.m., Kalasanthi at 8:00 a.m., Uchikalam at 12:00 p.m., Sayarakshai at 6:00 p.m., Irandamkalam at 7:00 p.m. and Ardha Jamam at 10:00 p.m. Each ritual has three steps: alangaram (decoration), neivethanam (food offering) and deepa aradanai (waving of lamps) for both Pandava Thoothar and Rukmini. During the last step of worship, nagaswaram (pipe instrument) and tavil (percussion instrument) are played, religious instructions in the Vedas (sacred text) are recited by priests, and worshippers prostrate themselves in front of the temple mast. There are weekly, monthly and fortnightly rituals performed in the temple.[10]

The temple is revered in Nalayira Divya Prabandham, the 7th–9th century Vaishnava canon, by Peyalvar, Bhoothathazhwar, Thirumazhisai Aazhwar, Nammazhwar and Thirumangai alvar. The Azhwars have sung praise on the different forms of Pandava Thoothar. The temple is classified as a Divyadesam, one of the 108 Vishnu temples that are mentioned in the book. Many Acharyas have also written songs on the various forms of God in this Temple.[6][7][11] Saint Emperumalar was believed to have been born in this place - he had a debate with saint Ramanuja for 18 days and finally became his disciple. There is a shrine dedicated to him in the temple.[12]