Thiruevvul (or Veerarghavaswamy Temple) is a temple dedicated to Hindu god Vishnu, located in Thiruvallur, a town and headquarters in Tiruvallur district in the South Indian state of Tamil Nadu. Constructed in Dravidian style of architecture, the temple is glorified in the Divya Prabandha, the early medieval Tamil canon of the Azhwar saints from the 6th–9th centuries AD. It is counted as one among the 108 Divya Desams dedicated to Vishnu. Vishnu is worshipped as Veeraraghava Perumal and his consort Lakshmi as Kamalavalli Thayar.

The temple is believed to be of significant antiquity and is believed to be initiated by the Pallavas of the late 8th century AD, with later contributions at different times from Thanjavur Nayaks. The temple has three inscriptions dating from the Chola period. The temple has a seven-tiered rajagopuram (gateway tower) and enshrined within a granite wall. The complex contains all the shrines and the temple tank is located to the west of the temple.

Veerraghava Perumal is believed to have appeared to marry his consort Lakshmi in the place. The temple observes six daily rituals and three yearly festivals. The chariot festival and float festival, celebrated during the Tamil month of Chittirai (March–April), is the most prominent festival of the temple. The temple is maintained and administered by the Hindu Religious and Endowment Board of the Government of Tamil Nadu.

Markandeya Purana details the history of the temple. A sage named Salihotra had his hermitage in this place. He used to grind rice for a living and offered half of the flour to the seekers and used to consume the rest himself. He was an ardent devotee of Vishnu. To test his devotion, Vishnu appeared as a guest to him one day. He requested Salihotra to offer him food, which the sage did. The guest felt hungry and requested the sage to offer more food. The sage offered the other half portion of the flour which he used to consume himself. The guest asked a place to rest and the sage readily offered his hermitage. On arriving at the hermitage, the guest revealed his true form and blessed the sage. As per another legend, Vishnu appeared in the place to marry Lakshmi, who was born as the daughter of Dilipa, the king of Dharmasenapura. He appeared in the place and married her.[2] The place is also called Thiruevvul and Veshranniem.[3]

The temple is originally believed to have been built by the Pallavas during the 8th century. There are inscriptions dating back to the later half of the 9th century Pallava dynasty reign here. Local folklore claims that the temple is around 5000 years old. According to historian K.V. Soundararajan, the Rangantha temples in South India built during the 9th and 10th centuries have a systematic arrangement of subsidiary deities as seen in this temple along with the Appakkudathaan Perumal Temple at Koviladi, Sowmya Narayana Perumal temple at Thirukoshtiyur, Rajagopalaswamy temple at Mannargudi and Rangantha temple at Srirangapatna.[4]

Most scholars believe that the major structures of the temple were built during 1409. There is an inscription on the Eastern wall in 1542 AD indicating grants to the temple by a private party.[5]

Shrines inside the temple

The temple is under administration of Ahobila Mutt. It has five tiered Rajagopuram (main gate). There are separate shrines for Kanakavalli, Ganesha, Alwars, Gajalakshmi Thayaar. Here, the Lord married Vasumathi the daughter of a king Dharmasena. There are also shrines to Ganesha, Gopalan, Nammazhwar, Chakrattazhwar, Andal, Vedanta Desika, Ramanujacharyar, and Lakshmi Narasimhar.

The presiding deity Veeraraghava swamy is in a recumbent position (called Bhujanga sayanm) facing east. His right hand blesses the sage Salihotra and left hand in gnana mudra preaches to Brahma. The Vimanam (pyramidal roof over the sanctum) is called Vijayakoti Vimanam as it is a symbol of victory against Madhukaidapas asuras who were killed by Vishnu. The Thayar is called Kanakavalli (also known by the name Vasumati) and her shrine is located parallel to the sanctum. There are shrines of Azhwars, Ranganatha and Hanuman located around the sanctum in the first precinct. The sacred tank is called Hrutatapanasini.

The presiding deity Veeraraghava Perumal is believed to cure diseases of his devotees and hence he is called "Vaithiya Veeraraghavan". There is another legend that Lord Shiva got rid of his Brahmahathi Dosha after worshipping Vishnu in the place. There is a small shrine for Shiva in this temple premises.[6]

Vishnu as Veera Raghavar is the presiding deity of the Veera Raghavar temple. He is also called Vaidya Veera Raghavar, in view of his ailment curing abilities. In this temple people submit small metal sheets with a specific human organ engraved on them as a request to god to cure the illness or problems with those organs. It is believed that those suffering from incurable diseases are cured if they worship the presiding deity. Devotees come here for marriage, progeny, and for relief from hardships. The water in the tank is considered more sacred than that of river Ganga. A dip in the tank is believed to relieve the devotee from sins he committed in thought as well as action. Abishekam, the sacred ablution to the presiding deity is done only with sandalwood oil. The temple is considered the Vaishnavite temple equivalent of healing abilities of the presiding deity to that of the Vaitheeswaran, the presiding deity of the Saivite Vaitheeswaran Kovil.[7] Thousands of devotees take a holy dip during new moon days and also pour molasses into the temple tank.[8]

The temple is revered in Nalayira Divya Prabandham, the 7th–9th century Vaishnava canon, by Thirumangai alvar and Thirumalisai Alvar.[2] The Azhwar has sung praise, imagining himself as a lady and Veeraraghava as his lover. The temple is classified as a Divyadesam, one of the 108 Vishnu temples that are mentioned in the book.[9] Many Acharyas have also written songs on the various forms of Bhaktavatsala in this Temple.[2] 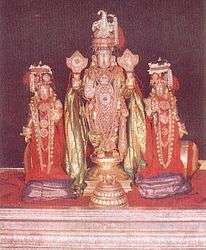 The temple follows the traditions of the Thenkalai sect of Vaishnavite tradition and follows vaikanasa aagama. The temple priests perform the pooja (rituals) during festivals and on a daily basis. As at other Vishnu temples of Tamil Nadu, the priests belong to the Vaishnavaite community, a Brahmin sub-caste. The temple rituals are performed four times a day: Kalasanthi at 8:00 a.m., Uchikalam at 12:00 p.m., Sayarakshai at 6:00 p.m., and Ardha Jamam at 8:30 p.m. Each ritual has three steps: alangaram (decoration), neivethanam (food offering) and deepa aradanai (waving of lamps) for both Bhaktavatsala Perumal and Kannamangai Thayar. During the last step of worship, nagaswaram (pipe instrument) and tavil (percussion instrument) are played, religious instructions in the Vedas (sacred text) and Nalayira Divya Prabandam are recited by priests, and worshippers prostrate themselves in front of the temple mast. There are weekly, monthly and fortnightly rituals performed in the temple.[9]

During the Tamil month of Chittirai, Brahmotsavam, a 10-day festival is celebrated, the festival deity is taken in procession around the streets of the temple in different mounts each day and the float festival is celebrated on the last day. The other festivals associated with Vishnu temples like Krishna Jayanthi, Saturdays of Tamil month Puratassi, Navratri, Vaikunta Ekadasi and Vijayadasami are celebrated during the respective days.[2]