Krishna Janmasthan or Keshav Dev Temple, is a temple in Mathura, India.[1] It is among the most sacred of Hindu sites, and is revered as the birthplace of Lord Krishna. The Keshav Dev Temple is a Hindu temple situated beside the main Krishnajanmabhoomi complex, the birthplace of Krishna in Mathura, India.[2] Kehsav Dev (Krishna) is the deity of this temple. According to traditions, the original deity was installed by Bajranabh, who was great-grandson of Krishna.[3]

After the 1992 Ayodhya events, when security was enhanced at the main Krishnajanmabhoomi complex, the temple has slowly become the de facto Krishna temple for locals and tourists alike. It still carries the local touch and charm of several other temples in the twin towns of Mathura and Vrindaban - which are similar to the older Dwarikadheesh temple in the old town. This temple holds its own festival calendar, and hosts nearly all of the Hindu functions within its own premises independently. The adjacent residential areas of Mallapura, Govind Nagar, and JagannathPuri are the main feeder for many of the festivals. It holds its own "Lathmar Holi", "Chhappan Bhog", and "Krishna Janmashtami" among other festivals. Most of the festivals here follow the calendar of the temples of Goverdhan, rather than that of the main Krishnajanmabhoomi complex.

The temple was built in Mathura, Uttar Pradesh over a prison, believed to be the birthplace of Lord Krishna. In contemporary memory, it was built by Raja Vir Sinh Bundela of Orchaa, in the reign of Jahangir. The Rajput prince enjoyed a special favour with the Mughal on account of his support to Jahangir in his succession.

The site has been a deeply religious one for the Hindus. It is said that the first temple here was constructed almost 5,000 years ago by Vajranabha, the great-grandson of Lord Krishna. The next big temple was constructed here during the time of the Gupta Emperor Chandragupta II, around 400 AD. This temple was so grand that it was said that neither painting nor description could describe it.

The second temple at the site came up during the rule of Chandragupta Vikramaditya. It was destroyed in 1017 AD by Mahmud of Ghazni. In Katra Keshavdev, they found an inscription on a stone slab which speaks of the third temple, built by Jajja in Vikrama Samvat 1207 (1150 AD) during the rule of Vijay Pal Deva. It's said Chaitanya Mahaprabhu visited the same temple when he came to Mathura before its destruction by the forces of Sikandar Lodhi in the 16th Century.

The fourth temple, the destruction of which is the source of the modern controversy, was built by Veer Singh Dev Bundela of Orchha when Jehangir was on the Mughal throne. But Aurangzeb's said to have ordered its destruction in 1669 and the present-day Idgah was constructed over a part of the raised plinth of the Keshavdev temple.

Destruction of the Temple by Aurangzeb 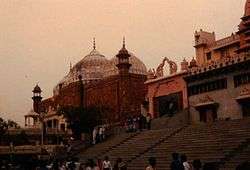 After the death of Jaswant Singh in 1678, the great mosque was erected in place of Keshava Dev Temple which was earlier built upon a Buddhist convent.[4] The great temple of Keshava Rai at Mathura was built by Vir Singh Deo during Jahangir's time at a cost of thirty-three lakhs of rupees. The Dehra of Keshava Rai was one of the most magnificent temples ever built in India and enjoyed veneration of the Hindus throughout the land. Prince Dara Shukoh, who was looked upon by the masses as the future Emperor, had presented a carved stone railing to the temple which was installed in front of the deity at some torn down by Aurangzeb.

During British rule in India, the area came under direct rule of British India. In 1815, the East India Company auctioned the area of Katra Keshavadeva, which was purchased by the then Raja Patnimal of Banaras. Although, the Raja of Benares wanted to build a temple there his wish remained unfulfilled and the family had fought several legal battles for ownership of land with the Muslim community of Mathura, in which, the court finally ordered that the land belongs to present heirs of the Raja of Benaras. In 1944, Madan Mohan Malviya was distressed at the plight of the site and arranged for the purchase of land from Raja Krishna Das of Benaras, who sold the land only at a cost of Rs. 13,000/- recovering just the cost of fighting court battles. Meanwhile, Malviyaji without seeing the temple work begin. Then Jugal Kishore Birla of Birla group decided to take the leading role to fulfill the wishes of Malviyaji and formed a private trust in 1951 to which the rights of land were later transferred. Jaidayal Dalmia of Dalmia Group was another leading personality, who took untiring efforts and the temple was finally constructed over the site. The trust which runs the temple has a glorious list of Trustees besides Birla and Dalmia family members like Ganesh Vasudev Mavalankar, Anantashayanam Iyengar, Swami Akhandananda Saraswati, Swami Ramdev Ji Maharaj. The present head of the temple is Mahant Nrityagopal Das.[5] The construction of the temple was completed in 1965 at a cost Rs 15 million.

Next to the temple, within the complex is a small room that looks like a prison cell, where it is said that Lord Krishna was born. The excavation of this site began in 1953 under the chairmanship of Swami Akhandanada when the volunteers started clearing the debris and work continued for several decades later under supervision of Babulal Bajaj and Phool Chand Khandelwal, till the prison complex was completed in 1982.[5]

Other temples with similar names 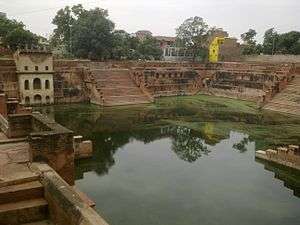 The name Kesava Deo Temple has been taken up by many other temples in and around Mathura.