Sathyamurthi Perumal Temple in Thirumayam, a panchayat town in the South Indian state of Tamil Nadu, is dedicated to the Hindu god Vishnu. Constructed in the Dravidian style of architecture, the temple is glorified in the Divya Prabandha, the early medieval Tamil canon of the Azhwar saints from the 6th–9th centuries AD. It is one of the 108 Divyadesam dedicated to Vishnu, who is worshipped as Sathyamurthi Perumal and his consort Lakshmi as Ujeevana Thayar.[1]

The temple follows Thenkalai tradition of worship. Four daily rituals and many yearly festivals are held at the temple, of which the car festival during the Tamil month of Vaikaasi (April - May), Krishna Jayanti during Aaavani (August - September) and Aadi Pooram during July - August being the most prominent. The temple is maintained and administered by the Archaeological Survey of India as a protected monument.

Historians believe that the temple was built during the 9th century by the Pandyas. M.A. Dhaky places the period to be the 7th decade of 9th century. He has also compared the images of the temple to that of Vijayalaya Choleeswaram in Narthamalai, built by Muttaraiyar kings during the same period.[2] 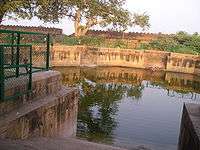 The Temple tank of Thirumayam temple

The presiding deity is called Sathyamurthi Perumal. The temple is old and large, and striking in appearance. The main statue of 'Sathyamurthi Perumal approximately seven feet in height, is standing on a rock, along with his wives. In the next Sannidhanam (sanctum), Mahavishnu's sculpture is in sleeping position, the position which is called in Tamil Ari thuyil, sleeping with a sense of knowing what is going on at present. Sculptures of Mahavishnu in this position can be viewed in many temples, although this is one of the largest examples. There are many sannidhis in the temple. All the statues are sculptured beautifully. It was built by the King Videlvidugu Mutharaiyar.The devotees who like to pray before Lord Mahavishnu in his Ari thuyil position for some minutes and who want to pray for few minutes before Sri Renganathar, Srirangam and didn't get such a chance, may visit Thirumeyyam.[3] It is where the largest Anantasayi (Vishnu in reclining pose) in India. It is a natural cavern which has been changed into a shrine.

The temple is adjacent to the Sathyagiriswara temple, located in the same complex. The temple is maintained and administered by the Archaeological Survey of India as a ticketed monument.[4][5]

The fort, the Shiva and Vishnu temples are the tourist attractions. The fort played an important role in the history of Thondaiman rulers of Pudukottai and the British. The 40 acre fort was built by Vijaya Ragunatha Sethupathi of Ramanathapuram in 1687 AD. On the hill, there is a rock-cut Shiva temple with inscriptions on music. There are relics of another fort. At the foot of the hill are the Shiva and Vishnu temples. It was in this fort that the brother of Kattabomman, Oomathurai was ensnared and imprison. An old armor used by him is exhibited here.[6]

Sathyamurthi Perumal temple is revered in Nalayira Divya Prabhandam, the 7th–9th century Vaishnava canon, by Thirumangai Azhwar. The temple is classified as a Divyadesam, one of the 108 Vishnu temples that are mentioned in the book. During the 18th and 19th centuries, the temple finds mention in several works like 108 Tirupathi Anthathi by Divya Kavi Pillai Perumal Aiyangar.[7]

The temple follows the traditions of the Thenkalai sect of Vaishnavite tradition and follows Vaikasana aagama. In modern times, the temple priests perform the pooja (rituals) during festivals and on a daily basis. As at other Vishnu temples of Tamil Nadu, the priests belong to the Vaishnavaite community, a Brahmin sub-caste. Four daily rituals are performed at various times of the day and many yearly festivals are held at the temple, of which the car festival during the Tamil month of Vaikaasi (April - May), Krishna Jayanti during Aaavani (August - September) and Aadi Pooram during July - August being the most prominent. There are weekly, monthly and fortnightly rituals performed in the temple.[7]