Jakath Rakshaka Perumal Temple or Thirukoodalur (locally called Aduthurai Perumal Temple) in Vadakurangaduthurai, a village in the outskirts of Kumbakonam in the South Indian state of Tamil Nadu, is dedicated to the Hindu god Vishnu. Constructed in the Dravidian style of architecture, the temple is glorified in the Divya Prabandha, the early medieval Tamil canon of the Azhwar saints from the 6th–9th centuries AD. It is one of the 108 Divyadesam dedicated to Vishnu, who is worshipped as Jakath Rakshaka and his consort Lakshmi as Padmasanavalli.

The temple is believed to have been built by the Medieval Cholas of the late 8th century AD, with later contributions from Vijayanagar kings and Madurai Nayaks. A brick wall surrounds the temple, enclosing all its shrines and bodies of water.

Jakath Rakshaka is believed to have appeared to sage Nandaka and King Ambarisha. Six daily rituals and three yearly festivals are held at the temple, of which the Brahmostvam, celebrated during the Tamil month of Vaikasi (May–June), is the most prominent. The temple is maintained and administered by the Hindu Religious and Endowment Board of the Government of Tamil Nadu.

As per Hindu mythology, demon Hiranyaksha fought with mother earth and went underground, called Patala. Vishnu was born as Varaha, an avatar in the form of a boar to pierced underground. He split the earth into two parts and brought the two back at Srimushnam. Thirumangai Azhwar quotes the incident and calls the village as Pugunthaan Oor, meaning the place where Vishnu went inside the earth. Since Vishnu protected the world here, he is called Jagath Rakshaka Perumal (in Tamil as Vaiyam Katha Perumal). The gap seen in the sanctum close to the image of Jagath Rakshaka is believed to be the centre point of earth and all devas came together to worship him. Since it brought all of them together, an act referred in Tamil as koodal, the village is called Thirukoodalur.[1] 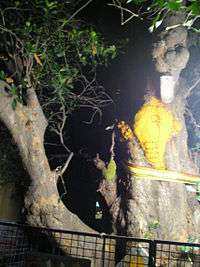 As per Hindu legend, King Ambarisha who immersed himself in the worship of Vishnu, failed to strengthen his army and lost his kingdom. While doing worship, he also did not observe the sage Durvasa who went along his way. The sage got irritated and cursed the king. The king went to Vishnu for rescue, who sent his discus to chase the sage. The sage surrendered to Vishnu and begged pardon. The king Ambarishan is believed to have built the temple and hence the presiding deity is also called Ambarisha Varadhar at this place.[2]

As per another legend, all rivers come to river Kaveri for cleansing themselves. Kaveri wanted to cleanse herself and approached Hindu god Brahma. She is believed to have worshipped Vishnu at this place and got relieved. A parrot which was devoted to Vishnu was shot down in the nearby forest. Vishnu rescued the parrot and appeased him of him previous birth. Thus it is believed that Vishnu descends here for all forms of life. Vishnu is also believed to have appeared for sage Nandaka.[1][3] Since all sages came here and prayed to Vishnu, the place is called Koodalaur (Koodal means group).[2]

Image of Azhwars and shrines

The temple is believed to have been built by the Medieval Cholas of the late 8th century AD, with later contributions from Vijayanagar kings and Madurai Nayaks. A brick wall surrounds the temple, enclosing all its shrines and bodies of water. The central shrine has the image of Jakath Rakshaka Perumal in standing posture. The shrine of the Padmasinivalli faces South. The temple has a 3-tiered rajagopuram (gateway tower). There are separate shrines for Ramanuja, Azhwars, Andal and Garuda. The vimana, the tower above the sanctum, is called Suddha Satwa Vimana.[1] A chariot called Ambarisha Ratha, renovated by Rani Mangammal, was in use till the 1940s, after which it was not used. There is a statue of the queen in the temple.[2]

Jagath Rakshaka is considered the saviour deity and he is believed to descend for all forms of life in the planet. The temple is revered in Nalayira Divya Prabandham, the 7th–9th century Vaishnava canon, by Tirumazhisai Alwar in one hymn. The temple is classified as a Divyadesam, one of the 108 Vishnu temples that are mentioned in the book. The temple is associated with Ketu, one of the Navagrahas, the nine planet deities of Hinduism. While Vishnu sent his discus to chase the sage Durvasa, the other symbol of him, the conch, got prominence. The conch is believed to have appeared in the jack fruit tree behind the sanctum. Devotees worship the conch in the tree in the temple and during festive occasions, perform special rituals.[1] 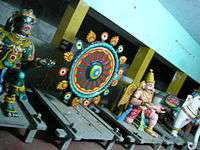 Vahana, sacred vehicles in which deity is taken around during festivals

The temple priests perform the pooja (rituals) during festivals and on a daily basis. As at other Vishnu temples of Tamil Nadu, the priests belong to the Vaishnavaite community, a Brahmin sub-caste. The temple rituals are performed six times a day: Ushathkalam at 7 a.m., Kalasanthi at 8:00 a.m., Uchikalam at 12:00 p.m., Sayarakshai at 5:00 p.m., Irandamkalam at 6:00 p.m. and Ardha Jamam at 7:30 p.m. Each ritual has three steps: alangaram (decoration), neivethanam (food offering) and deepa aradanai (waving of lamps) for both Jakath Rakshaka and Padmasavalli. During the last step of worship, nagaswaram (pipe instrument) and tavil (percussion instrument) are played, religious instructions in the Vedas (sacred text) are recited by priests, and worshippers prostrate themselves in front of the temple mast. There are weekly, monthly and fortnightly rituals performed in the temple. The Brahmotsavam festival celebrated in the Tamil month of Vaikasi (May–June) and Vaikunta Ekadasi celebrated during the Tamil month of Margazhi (December–January) are the major festivals celebrated in the temple. Srisukta Homam, a religious practice, is performed in the temple with 108 lotus leaves on full moon days.[1]