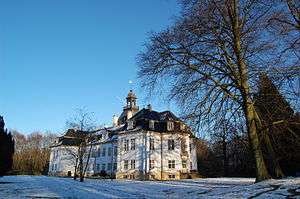 Charlottenlund Palace in the winter time

Charlottenlund is a suburban area on the coast north of Copenhagen, Denmark. It is the administrative seat of Gentofte Municipality. Bordered to the east by the Øresund, to the South by Hellerup and to the north by Klampenborg, it is one of the most wealthy areas in Denmark. The neighbourhood takes its name after Charlottenlund Palace.

A scene from Charlottenlund Forest

In 1733, King Christian VI of Denmark rebuilt the Gyldenlund Palace, renaming it Charlottenlund Palace after his sister Princess Charlotte Amalie.

In the 19th century, it became popular with the bourgeoisie in Copenhagen to make excursions to the countryside north of the city. Charlottenlund Forest was a popular destination.

The Ordrupgaard Museum boasts collections of Danish and French art from the 19th and beginning of the 20th century.