Skanderborg is a town in Skanderborg municipality, Denmark. It is situated on the north and north eastern brinks of Skanderborg Lake and there are several smaller ponds and bodies of water within the city itself, like Lillesø, Sortesø, Døj Sø and the swampy boglands of Eskebæk Mose. Just north of the town on the other side of Expressway E45, is the archaeologically important Illerup Ådal. Over time, the town has grown into a suburb of Aarhus to the north east, connected by the urban areas of Stilling, Hørning and Hasselager.

Skanderborg is an old town and the area have revealed traces of human settlements, dating from the earliest Nordic Stone Age. A seasonal camp from the Ertebølle culture, was found here in the 1930s for example, near the former Ringkloster (English: Ring Abbey) on the southern brinks of Skanderborg Lake.[4][5]

The town sprawled around the former Skanderborg Castle, founded at some point during the early Middle Ages[6] and in 1583 Skanderborg was granted a municipal charter.[7]

The town of Skanderborg has attracted several religious communities over the years, especially in the early Middle Ages. The long gone Ring Abbey founded by Benedictine nuns in the 12th century, was once situated on the southeastern brinks of Skanderborg Lake. The last buildings burned down in 1715 and now there is a mansion at the site.[8] There also used to be a Dominican monastery on the small islet of Kalvø in the middle of the lake.[9] The monastery was founded by the Black Friar Order in the first half of the 12th century, along with a small harbour, but in 1168 there were only two monks left and the Cistercian Order took over. The Cistercians came here after they had failed in founding a proper monastery at several nearby locations since 1165. In that year, they embarked on a mission from Vitskøl Abbey in Himmerland, to found a daughter community in the diocese of Aarhus and tried at Sabro, at Sminge near Silkeborg (Sminge Abbey), and then near the village of Veng (Veng Abbey). The Cistercians eventually felt too isolated on the small isle of Kalvø, often cut off from the mainland for days and weeks even when the weather was harsh, and after just four years, they gave up here, too, and moved to Rye between Mossø and Gudensø, a few kilometres west of Skanderborg. Here they founded Øm Abbey in 1172.[10][11] 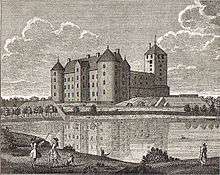 The renaissance version of Skanderborg Castle.

The royal residence of Skanderborg Castle was arguably the most important and influential building in the history of Skanderborg, but it was demolished stone by stone during the 18th century. Founded at some point in the early Middle Ages around 1200, King Frederik II had the old medieval castle radically rebuilt and expanded around 1570. His project was grandiose in scale. An entirely new large Renaissance palace was erected and the deer park of Skanderbrog Dyrehave was constructed nearby, amongst other undertakings. Stones from the demolished Øm Abbey west of Skanderborg were used as construction materials. Many of the original structures survived the project and were incorporated into the new buildings, amongst these the old castle chapel. In the 12th-16th centuries, Skanderborg Castle functioned as the traditional hunting retreat of the Danish kings.[7]

In the years of 1717-22, King Frederik IV began demolishing the old original medieval structures and replaced the former fortifications with terraced gardens. Only the bell tower of the still existing castle church remained. In turn however, Skanderborg Castle saw a decline in popularity and attention by the royal family, and in 1767, the castle with associated gardens was sold at auction. Commoner Hans Lauritzen bought the royal property for the sum of 3004 Rigsdaler, while the castle church with furnishings and bells was granted to the town of Skanderborg. In April 1768, the demolishing of Skanderborg Castle began and nothing remains of it today, except the old castle church.[7] 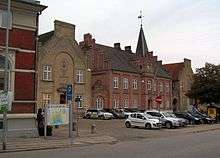 The cultural centre of Kulturhuset, located in Byparken (the city park) in the center of Skanderborg, was designed by native architectural firm Kjær & Richter and built in 1998. It houses the former library of the town, theatre and concert halls, a cinema, a three story foyer with changing exhibitions and a café. Surrounding the buildings, are a Greek theatre with 500 seats, a playground and a beach volley field, amongst other facilities, as the city park itself is perceived as part of the cultural centre.[12]

The square of Højvangens Torv, in the northeastern parts of the town, is the center of the educational campus known as Campus Højvangen. The campus is the site of educational institutions such as a public school, a business college (an HHX institution), technical college (an HTX institution under Aarhus Tech), an adult educational centre, Skanderborg Gymnasium etc., situated in a sculpture park. The gymnasium was designed by architectural firm Friis & Moltke and built in 1973.[13][14][15]

The Village of Sølund is an accommodation facility and home for people with extensive physical and mental handicaps. It is located within the park of Skanderborg Dyrehave near the pond of Lillesø, close to town. The main buildings were erected in 1935 and designed by architectural firm C. F. Møller Architects.[16]

Skanderborg Museum has their headquarters at Adelgade 5, a former bailiff (Danish: foged) house from the mid 18th century. The buildings are located in the oldest parts of the town, next to the pond of Lillesø. The Museum functions as an umbrella organisation for several museums in and around the town of Skanderborg, including Museet på Adelgade, Øm Kloster Museum, Museet på Gammel Rye Mølle, Ferskvandsmuseet and Skanderborg Bunkerne.[17] Skanderborg Bunkerne is a World War II museum, fitted out in the abandoned German bunkers in Skanderborg Dyrehave. The German Luftwaffe built their Danish headquarters here and one of the bunkers later found use as the command centre for the civil defence agency during the cold war era.[18] Øm Kloster Museum is located outside the town, at the old ruins of Øm Abbey on the northern brink of lake Mossø. Skanderborg Museum is the responsible organisation for archaeology and archiving of the cultural history within the municipality.[19] 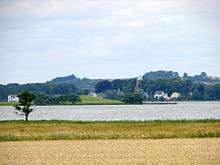 Skanderborg Lake as seen from the northeast, with Kalvø and the remaining red brick castle church, once associated with Skanderborg Castle. The beech trees behind the church are the outskirts of Skanderborg Dyrehave.

In the southern part of the town is the deer park of Skanderborg Dyrehave, located within Skanderborg Forest. The deer park was established around 1580 by King Frederik II to facilitate his interest in hunting. The park area was fenced and roe deer, red deer, wild boars and rabbits were released. Pheasants, gray partridge and turkeys were raised and pools and fishing ponds were dug.[20]

Skanderborg Sø (English: Skanderborg Lake) was created during the last ice age and formed from a melting block of ice left behind; a so-called kettle hole. The lake has an irregular shape divided into two larger lake-areas known as Hylke and Store Sø respectively, with a total surface area of 8.6 square kilometers. The lake has an average depth of 8 meters and up to 18.8 meters at the deepest spot. It holds approximately 49.3 million cubic meters of freshwater 23.5 meters above sea level[9][21] and empties into Mossø, by the short stream of Tåning Å in the west. There are a number of small isles in the lake; Kalvø, Æbelø, Sct. Thomas and Sct. Helene.[22]

Since 1980, the Skanderborg Festival, an annual music festival, has been held in August in Skanderborg Dyrehave.

Every summer in June, Skanderborg also hosts a musical festival targeted specifically for people suffering from arrested development. Organised by the institution of Sølund, it claims to be the largest festival in the world of its kind.[23]

Skanderborg is the birthplace of The English and Scottish queen Anne of Denmark. She was born at Skanderborg Castle 12 December 1574 and was baptized in the Castle Church 23 January 1575.[24]

Architect Christian Frederik Møller (C.F.Møller), was born on 31 October 1898 in Skanderborg. He founded and gave name to what is now the biggest architectural firm in the country. Møller designed many famous buildings, including Aarhus University and Centralinstitutionen Sølund in Skanderborg. He became the first rector of Aarhus School of Architecture in 1965.

Writer Ole Lund Kirkegaard was born in Aarhus in 1941, but grew up in Skanderborg, when his parents relocated. The milieu and many of the characters of his famous stories are related to people and places of Skanderborg. At some point, he and his parents took residence in a house in Møllegade and today the street is named Ole Lund Kirkegaards Stræde, in commemoration of his life, work and importance in the culture of Denmark.

Actress Kirsten Lehfeldt was born in Skanderborg 19 December 1952. She won several prizes for her acting, including the Robert Award and Bodil Award for Best Actress in a Leading Role.

Pop singer and producer Camille Jones was born in Skanderborg on 28 November 1973, but grew up in Aarhus.