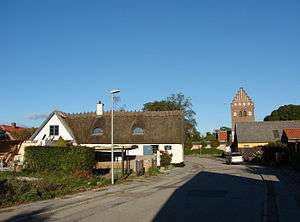 Tårnby is a town in Denmark, the seat of Tårnby Municipality in the Capital Region of Denmark. It is located approximately 6.5 kilometres (4.0 mi) south of Copenhagen on the island of Amager. Neighbouring settlements include the Copenhagen suburb of Sundbyvester to the north and Kastrup to the south. Copenhagen Airport is situated to the east of Tårnby. It includes the islets Saltholm and Peberholm.

While there's no clear date for the founding of Tårnby, archeological expeditions prior to the building of the Øresund Bridge suggests that the first traces of Tårnby have originated around the 12th century, around a farm from which the village grew.[1]

In the 15th century the Danish King Christian II invited Dutch settlers to Amager. Because of this, Tårnby, like the neighbouring city Dragør, also has small traces of Dutch history and culture.[2]

In 1970, Tårnby also became the administrative division of the adjacent city of Kastrup, as part of a larger reform of the Danish counties.[3]

The town is situated in the island of Amager, close to Dragør, in the southern suburbs of Copenhagen and is part of the capital's urban area. The terrain is quite flat and doesn't rise more than 8 meters (appr. 26 feet) above sea level. Tårnby also incorporates the islands of Saltholm and Peberholm, natural and artificial respectively, both situated in the Øresund Strait.

While Tårnby has a history of farming, it has been almost completely urbanised, leaving only small traces of farmland in the southernmost parts.[4] The westernmost part of the municipality contains Amager Fælled, a protected wildlife and recreational area. As such, the area is primarily used for birdwatching and various recreational activities. However, in recent years urban development have limited the area significantly.