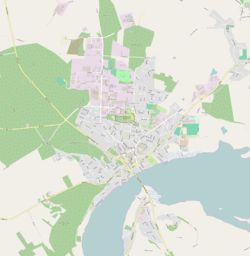 Hadsund is home to a number of companies, including Hedegaard Foods and Nilfisk-ALTO. West of Hadsund stands the oldest still existing windmill, Havnø Mølle, which was built in 1842.

The city can be traced back to the 18th century as Healthy houses, that was the name of the first farms along the highway, now the street outside. The town was trading platform privileges December 1, 1854 (which then officially the city's birthday), but has never gained market town-rights since it ceased in Denmark were in 1970.

In Hadsund there are several educational institutions, including Tech College Mariagerfjord, VUC Hadsund, Hadsund School and Hadsund Produktionsskole. The city has a larger selection of supermarkets and specialty shops. The town also has the only covered shopping center in Himmerland: Hadsund Butikscenter.

Storegade in Hadsund since 1990 constituted the city's pedestrian zone. The street was until the road was reorganized in 1970 part of the main highway between Hobro and Aalborg. 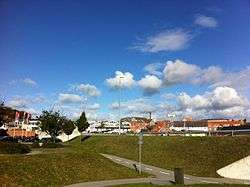 The town of Hadsund is situated south of the city of Aalborg, and north of the city of Randers. Hadsund was founded in 1854, when the city received commercial space privileges. Before this there had only been a ferry crossing with permission to hold markets on both sides of the fjord. In 1861, a commercial instituted and in 1883 was rail link to Randers, from 1900 also to Aalborg. Hadsund had two stations, namely Hadsund North Station, which lay within the city, and Hadsund South Station, which remains in Hadsund South today. Hadsund North Station was demolished in 1985. The course was closed on April 1, 1969. Today the town has a population of 4,883 (January 1, 2014).[1] 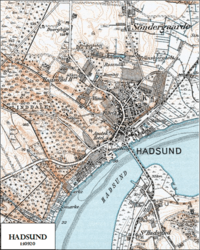 It was founded in 1854, when it received handelspladsprivilegiet. Before, it had been only a ferry terminal with permission to hold markets either side of the fjord. In 1883 a rail link was established to Randers, and in 1900 another to Aalborg. Hadsund had two stations: Hadsund Nord (demolished in 1985) and Hadsund Syd.

There has long been a bridge over Mariager Fjord, which is why a settlement grew up here. From ancient times a bridge went from Hobro to Aalborg via Randers or vice versa. In 1904 a railway bridge over the inlet opened, bringing the hinterland south of the fjord closer to the town.

was given to the town in 1937. The coat of arms shows mainly the 1904 bridge. The four waves symbolize villages that lay in the municipality: Skelund, Visborg, Vive, and Hadsund. The crescent shape symbolizes the new municipality, and the star represents longevity. The bridge was replaced in 1976, but its classic steel arches were never changed in the town logo.

Other settlements in Rockford:

Climate in this area has mild differences between highs and lows, and there is adequate rainfall year round. The Köppen Climate Classification subtype for this climate is "Cfb" (Marine West Coast Climate/Oceanic climate).[2]