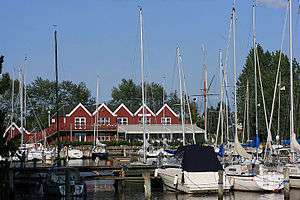 Vallensbæk is a seaside western suburb of Copenhagen, Denmark. It forms its own municipality, Vallensbæk Municipality, which is one of the smallest Danish municipalities. As of January 2014, its population was 15,095.[1]

The municipality area borders on Ishøj to the west, Brøndby Strand to the east, and Albertslund to the north.

Vallensbæk Church was built in the 12th century. In 1784, it consisted of 14 farms. The main crop was barley. The civil parish of Vallensbæk (Vallensbæk Sognekommune) was founded in 1842.[2]

The train station Vallensbæk station was the terminus of the first stage of the Køge Bay Line which opened in 1972. The opening of the train line kickstarted a suburban development of the area.

The local council in Vallensbæk consists of 15 members. Members are elected for a period of 4 years.[3]

Vallensbæk's most notable church is Vallensbæk Church which dates from the second half of the 12th century. It then consisted of a Romanesque chancel and nave, built in chalk ashlar. The west end of the ship consists of another masonry that has been added so that the nave was extended westward.

The tower was added in the years after the 1500th. The porch was renewed by a thorough restoration of the church in 1865.

Vallensbæk Marina is one of four marinas in the 7 km long Køge Bugt Beach Park. The marina contains several restaurants as well as other facilities for sailors. The beach park offer good bathing facilities.

Located on the Køge Bugt radial of the S-train network, Vallensbæk station is served by the A-trains.

This article is issued from Wikipedia - version of the 9/26/2014. The text is available under the Creative Commons Attribution/Share Alike but additional terms may apply for the media files.