Holstebro is the main town in Holstebro Municipality, Denmark. The town, bisected by the Storåen ("The Large Creek"), has a population of 34,873 (1 January 2014).

The town arose at a ford by the creek, and later a bridge was erected. The name probably derives from holdested ved broen (lit, "a resting place by the bridge").

Holstebro was first mentioned in a letter from Bishop Thyge of Ribe in 1274. A large fire in 1552 destroyed many of the town's old buildings.

The town is a trading, industrial and cultural center in western Jutland. Industries include the manufacture of processed food, iron and machinery, wood and furniture, textiles and chemicals.

Holstebro has a large network of pedestrian walkways (gågader) in the town centre either side of the River Storå. This area has a varied shopping environment, enhanced by outdoor sculptures and picturesque buildings, including the town church and the Town Hall. The first sculpture purchased by Holstebro Municipality was Alberto Giacometti's sculpture "Woman on the Cart" purchased in 1966.

Holstebro has a rich and varied cultural life. Between 1997 and 2009 it hosted the internationally recognized ballet company Peter Schaufuss Ballet and the town still hosts the performance art theatre Odin Teatret. Several museums, including the Holstebro Art Museum with its collection of Danish and international contemporary art, and the Holstebro Museum can be found in the town.

The town holds an annual culture festival, the Holstebro Festive Week, in late summer. The Holstebro Hall, rebuilt in 1966, houses a music theatre, the Holstebro Convention and Culture Center (1991) and provides space for theatre presentations, concerts, exhibitions and conventions. More than 100 cultural events occur here every year, and the hall is visited by more than 100,000 people annually.

The Jutland Dragoon Regiment (Jydske Dragonregiment), which can trace its history back to 1679 in the times of King Christian V, has made Holstebro its home since 1953. The regiment is Holstebro's largest place of work with more than 1,800 employees. 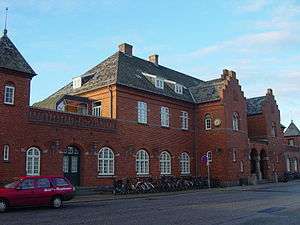 Holstebro is served by Holstebro railway station. It is located on the Vejle-Holstebro and Esbjerg-Struer railway lines and offers direct InterCity services to Copenhagen and Struer and regional train services to Fredericia and Skjern.

Team Tvis Holstebro were founded in 1990 and play handball, representing Holstelbro in the mens Danish Handball League and the Danish Women's Handball League. The women's team has won the Women's European Handball Federation cup twice, in 2012–2013 and 2014–2015 and were runner's up in 2010–2011. The team's best placing in the domestic league was 2nd in 2012–13 and, as a result, they competed in the qualification rounds of the 2013–14 EHF Women's Champions League, the highest level competition in Europe.

The men's handball team won the Danish Handball Cup in 2008 and have finished third in the domestic league three times, most recently in 2008. They achieved third place in the men's 2012–13 EHF Cup. Both teams play at Gråkjær Arena, a 3,250 capacity hall which can also be used for concerts. The arena is located to the north of the town centre.[1]

Holstebro Idrætspark, located to the north-east of the town centre, is a multi-use sports complex. A stadium on the site is home to Holstebro BK, the town's football club who play in the 4th tier of Danish football, the Denmark Series. The site also features playing fields, beach volleyball courts and a sports hall. A tennis centre, including an indoor hall and seven outdoor courts, adjoins the site and is the home of Holstebo Tennis Club.[2] Holstebro RK play rugby union in the town.

Canoeing and kayaking on the nearly 100 km (62 miles) long Storåen is popular during the summer and early autumn. It is allowed between 15 June and 31 October.[3]

A Danish national Scouting Jamboree took place near Holstebro in July 2012. Over 37,000 Scouts and Guides attended the event.[4][5]

Holstebro is a founding member of the Douzelage, a unique town twinning association of towns across the European Union. This active town twinning began in 1991 and there are regular events, such as a produce market from each of the other countries and festivals.[6][7]