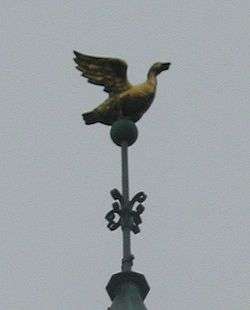 Vordingborg is situated 37 km from Nykøbing Falster, roughly 50 km from Gedser, and roughly 100 km from Copenhagen and Odense. The town is situated on the island of Zealand and is linked to the island of Falster with Farø Bridges and Storstrøm Bridge.

Vordingborg Municipality is home to 9,500 jobs.[2] Companies headquartered in Vordingborg include Vordingborg Køkkener, a kitchen manufacturer.[3] Udbetaling Danmark, a public institution under ARP, has one of its five regional centres in the town.[4]

The ruins of Vordingborg Castle, the old royal castle which was built around 1364, is the town's most famous attraction. The only fully remaining part of the castle, the 26 meter tall Goose Tower (Gåsetårnet), is the symbol of the city. It is the largest of King Valdemar Atterdag's nine main castle towers. The name comes from the golden goose perched on top of the tower's spire. Legend has it that Valdemar Atterdag used the symbol to taunt the Hanseatic League. The current goose was put there in 1871. It is not certain what was on top of the tower before 1871 and maybe it was just a weather vane made of gold.[5] The tower was transferred into the national trust on December 24, 1808, and is thus the first, protected historic monument in Denmark.

A historic garden is also located on the site of the ruin.

Vordingborg is the home of the South Zealand Museum (Sydsjællands Museum).

The Vordingborg Transmitter is one of the tallest towers in Denmark.

The Danish Army operates a barracks facility on the edge of town, known as Vordingborg Kaserne.

Vordingborg is twinned with: