The climate is dry and hot, with rains during October–December. Temperatures during summer reach a maximum of 40 and a minimum of 17 degrees Celsius. Winter temperatures range between 30 and 18 degrees Celsius. The average annual rainfall is about 70 cm.

Aruppukottai acts mainly as an educational and commercial hub for the surrounding villages. It is noted for its cotton industries mainly spinning mills. Rice mills and limestone industries, hand loom, power loom, printing press, and some small-scale industries such as school note book and daily calendar manufacturing. Hand loom, power loom is the main job in Vellaikottai area. Major employers are spinning mills, weaving sectors (handloom and powerloom), rice mills, private transport and government sector apart from agriculture. Aruppukottai has mixed population town. Aruppukottai was once known for its handloom weaving industry and for Agricultural Millets very much famous.

Recently, an e-smart classroom was launched by Ex-Minister for Information and Technology Poongothai Aladi Aruna and School Education Ex-Minister Thangam Thennarasu at a Government Higher Secondary School in Mallankinaru near Aruppukottai.[4] Recently an international CBSE school was also opened in the city.

Headmasters and subject teachers from top-notch schools in Virudhunagar district will also be invited to Tiruchi to guide their counterparts to scale up their performance.[5]

Aruppukottai is a revenue division in virudunagar district. There is a Revenue division officer/sub divisional magistrate. There are five police stations for the public convenience One Is DSP Office, the second one is Taluk Police Station, third is For Town Police Station, fourth one is traffic police station and the fifth one is All Women police Station. A Sub-Court, a District Munsif Court and a Judicial Magistrate Court are functioning in Aruppukottai, and are located in a Combined Court Complex.

Aruppukottai acts as a hub connecting Madurai, Thoothukudi, Virudhunagar, Tirunelveli, kovilpatti and Ramanathapuram. aruppukottai which is well connected by roads.

Madurai, the 3rd biggest city in Tamil Nadu by population, is only 48 km away. NH 45-B, an important freight-route, connecting Trichy, Madurai and Thoothukkudi runs through Aruppukottai.

Aruppukkottai Railway station has a broad gauge railway line that connects to Manamadurai and Virudhunagar. It is the main route to connecting south districts to delta districts,and it is the route Virudhunagar–Aruppukkottai-manmamadurai-karaikudi-trichy, alternate route for virudhunagar-madurai-dindugal-trichy to chennai.Further more now Railway department is starting a new railway line between Madurai to Thoothukudi New railway line through madurai - thiruparangundram - Kariapatti - Aruppukottai - Vilathikulam -Thoothukudi. 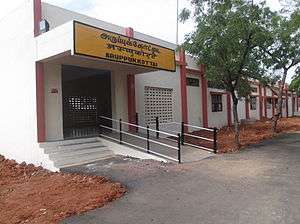 Madurai International Airport is just 44 km away from Aruppukottai city.