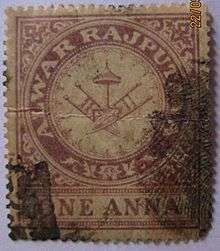 A revenue stamp from Alwar from the early 20th century.

Alwar State was a princely state ruled by a Rajput dynasty during the period of the British Raj in India. Its last ruler signed the accession to the Indian Union on 7 April 1949.[1]

Alwar has been a part of Matsya region of olden times whose capital was Viratnagar. "Alwar" was formerly known as "Ulwar". Alwar is named after a Khanzada ruler, Alawar Khan, who established his kingdom in this region in 1412. Alawar is descendent of Chandrawanshi rajput Nahar Khan who converted to Islam in thirteenth century during Firuz Shah Tughlak's regime. Hasan Khan Mewati is descendent of Khanzada (Raj put) Nahar Khan. Khanzada Hasan Khan Mewati fought against invader Babar and later on Hasan Khan's nephew Jamal Khan gave his two daughters to Humanyun and Bairam khan in marriage. Bairam khan's son from this marriage was later known as famous Raheem Khan-e- Khana, he was Akbar's navratna. In the 1550s, Khanzada Rajput king of Ulwar was overthrown by Akbar's military campaign to encircle Mewar Kingdom. Akbar is said to have arranged to kill his former Regent, Bairam Khan while the latter was on his way to Hajj; after he had been court-martialled by the Emperor for his bloodthirst.

Following the independence of India in 1947, Alwar acceded unto the dominion of India. On 18 March 1948, the state merged with three neighboring princely states (Bharatpur, Dholpur and Karauli) to form the Matsya Union. This union in turn merged unto the Union of India. On 15 May 1949, it was united with certain other princely states and the territory of Ajmer to form the present-day Indian state of Rajasthan.[2] 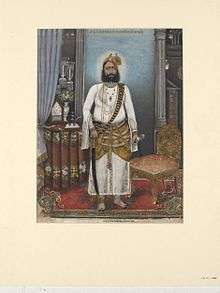