Baroda State was a princely state in present-day Gujarat, ruled by the Gaekwad dynasty of the Maratha Confederacy from its formation in 1721 until 1949 when it acceded to the newly formed Union of India. With the city of Baroda (Vadodara) as its capital, during the British Raj its relations with the British were managed by the Baroda Residency. At the time of Indian independence, only five rulers—the Nizam of Hyderabad, the Maharaja of Mysore, the Maharaja of Jammu and Kashmir state, the Maharaja Gaekwad of Baroda and the Maharaja Scindia of Gwalior—were entitled to a 21-gun salute.[1] Baroda formally acceded to the Union of India, on 1 May 1949, prior to which an interim government was formed in the state.[2] 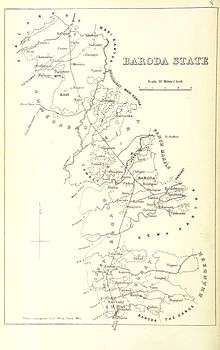 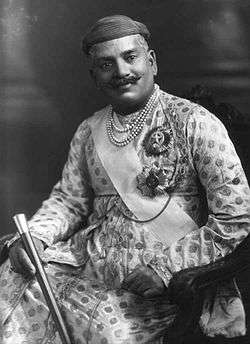 Baroda derives its native name Vadodara from the Sanskrit word vatodara, meaning 'in the heart of Banyan (Vata) tree. It also has another name, Virakshetra or Virawati (land of warriors), mentioned alongside Vadodara by 17th century Gujarati poet Premanand Bhatt, native to the city. Its name has been mentioned as Brodera by early English travellers and merchants, from which its later name Baroda was derived.[3] Geographically it comprised several disjoint tracts of land, measuring over 8000 square miles, spread across the present Gujarat state; this was subdivided into four prant (states), namely Kadi, Baroda, Navsari and Amreli, which included coastal portions of the state, in the Okhamadal region near Dwarka and Kodinar near Diu.[4]

The Marathas first attacked Gujarat in 1705. By 1712, a Maratha leader Khande Rao Dabhade grew powerful in the region and when he returned to Satara in 1716, he was made the senapati (commander in chief). Thereafter during the "Battle of Balapur" in 1721, one of his officers, Damaji Gaekwad was awarded the title Shamsher Bahadur or Distinguished Swordsman. Damaji died in 1721 and was succeeded by his nephew Pilajirao.[5]

Thus the Baroda State was founded in 1721, when the Maratha general Pilaji Gaekwad conquered Songadh from the Mughals. Prior to this Pilajirao was appointed as general to collect revenues from Gujarat by the Peshwa, the effective ruler of the Maratha Empire, who had taken over the region north and south of Surat from the Mughals to established the Sarkar of Surat. Songadh remained the headquarters of the "House of Gaekwad" until 1866.[6][7] After the Second Anglo-Maratha War (1803–1805), the East India Company wrested control of much of Gujarat from the Marathas. However the Gaekwads of Baroda (Vadodara), made a separate peace with the British, entering into a subsidiary alliance which acknowledged British suzerainty and control of the state's external affairs in return for retaining internal autonomy.

Silver rupee of Sayaji Rao II of Baroda (ruled 1819-47), naming the Mughal emperor Muhammad Akbar II, dated AH 1238 (= 1822-23 CE). The prominent Nagari letter sa stands for Sayaji Rao and we also see a curved sword, one of the dynastic symbols of the Gaekwads and seen also on the Baroda state flag.

Although the Gaekwads trace their origins to 1720, it was not until considerably later that Baroda can be truly thought of as an independent state. The first coins issued by the Gaekwads were issued by Manaji Rao (ruled 1789-93) and they followed the Maratha pattern of naming the Mughal emperor Shah Alam II, distinguishing themselves only by the placement of an extra mark or letter to indicate the issuer. Manaji, for example, placed a Nagari letter ma on his coins. After 1857, since the Mughal emperor had been formally deposed, it no longer made any sense to issue coins in his name, so the designs were changed and coins were issued in the name of "the Commander of the Sovereign Band," a title of the Gaekwad. The legends on these coins were still in Persian and the coins themselves were still hand-struck. Finally, in stages during the 1870s, Nagari legends and different designs were introduced and also milled coins began to be issued, eventually featuring the portrait of the Gaekwad on them.

Following the death of Sir Khanderao Gaekwad (1828–1870), the popular Maharaja of Baroda, in 1870, it was expected that his brother, Malharrao (1831–1882), would succeed him. However, Malharrao had already proven himself to be of the vilest character and had been imprisoned earlier for conspiring to assassinate Khanderao. As Khanderao's widow, Maharani Jamnabai (1853–1898) was already pregnant with a posthumous child, the succession was delayed until the gender of the child could be proven. The child proved to be a daughter, and so upon her birth on 5 July 1871, Malharrao ascended the throne.

Malharrao spent money liberally, nearly emptying the Baroda coffers (he commissioned a pair of solid gold cannon and a carpet of pearls, among other expenses) and soon reports reached the Resident of Malharrao's gross tyranny and cruelty. Malharrao further attempted to cover up his deeds by poisoning the Resident, Colonel R. Phayre C.B. with a compound of arsenic. By order of the Secretary of State for India, Lord Salisbury, Malharrao was deposed on 10 April 1875 and exiled to Madras, where he died in obscurity in 1882.[8] With the throne of Baroda now vacant, Maharani Jamnabai called on the heads of the extended branches of the dynasty to come to Baroda and present themselves and their sons in order to decide upon a successor.

Kashirao and his three sons, Anandrao (1857–1917), Gopalrao (1863–1938) and Sampatrao (1865–1934) walked to Baroda from Kavlana-a distance of some 600 kilometers-to present themselves to Jamnabai. Eventually Gopalrao was selected by the British Government as successor and was accordingly adopted by Maharani Jamnabai, on 27 May 1875. He was also given a new name, Sayajirao. He ascended the gaddi (throne) at Baroda, 16 June 1875 but being a minor reigned under a Council of Regency until he came of age and was invested with full ruling powers on 28 December 1881. The Maharajah of Baroda, Sir Sayajirao Gaekwad III, became one of the most important rulers of the state, founding numerous institutions, including the Bank of Baroda on 20 July 1908. The bank, along with 13 other major commercial banks of India, was nationalised on 19 July 1969, by the Government of India; it is today the third largest bank of India.[9]

By the beginning of the 20th century, the relations of the British with the four largest princely states—Hyderabad, Mysore, Jammu and Kashmir, and Baroda were managed by a British Resident under the direct authority the Governor-General of India.[10] In 1911, Baroda State spanned 8,182 km2 (3,159 sq mi), and the population was 2,032,798 persons as per the 1911 census of India.[11] The state was very wealthy. The Pittsburgh Press reported in 1927 that the diamond necklace, which contained the Star of the South diamond, was a part of a royal collection worth $10,000,000 at the time, housed in the Nazarbaug Palace (built 1721) in Baroda city; another important part of the collection was a cloth embroidered with precious stones and seed pearls, made to cover the tomb of Mohammed.[12][13]

Dr. B.R.Ambedkar writes about his experience with untouchability in Baroda in the second chapter of his autobiographical book, Waiting for a Visa.[14]

In 1937 the princely states of the Baroda Residency were merged with those of the agencies adjacent to the northern part of the Bombay Presidency —Rewa Kantha Agency, Surat Agency, Nasik Agency, Kaira Agency and Thana Agency— in order to form the Baroda and Gujarat States Agency.[15] A few years before independence the process of the 'Attachment Scheme' began in order to integrate the smallest princely states, estates and thanas. Baroda State was one of the main beneficiaries of this measure by being able to add about 15,000 km² and half a million inhabitants to the state. The merged states were Pethapur on 1 February 1940, the Katosan Thana, with Deloli, Kalsapura, Maguna, Memadpura, Rampura, Ranipura, Tejpura, Varsora, the Palaj Taluka and both Ijpura States between June and July 1940. These were followed on 10 July 1943 by the states of Ambliara, Ghorasar, Ilol, Katosan, Khadal, Patdi, Punadra, Ranasan, Wasoda and Wao[16] Also many small Talukas of the region were merged. On 24 July 1943 Sachodar State and a few small places that had no own jurisdiction were annexed. By December of the same year the small states of Bajana, Bhilka, Malpur, Mansa and Vadia followed suit.[17] Finally on November 5, 1944 the Baroda and Gujarat States Agency was merged with the Western India States Agency (WISA) to form the larger Baroda, Western India and Gujarat States Agency. A newly reformed State Legislative Assembly known as Baroda State Praja Mandal assembled at Thol village, 20 miles from Ahmedabad, on 27 October 1940, with Sardar Vallabhbhai Patel as its president.[18]

After the independence of India, which initially did not include Baroda or many other princely states, an interim government under Prime Minister Dr. Jivraj Narayan Mehta, son-in-law of Manubhai Mehta, then Dewan of Baroda state, was inaugurated in the State, on 4 September 1948, by the then Maharaja at a special Durbar in the Laxmi Vilas Palace, Baroda.[19] Finally on 1 May 1949, Baroda State, the third largest state at the time of British India, formally acceded to the Dominion of India,[2][20] Initially, Baroda merged with the Bombay state, and then, on 1 May 1960, when the two new states of Gujarat and Maharashtra were formed, it became part of Gujarat, with Dr. Jivraj Narayan Mehta becoming the first Chief Minister of Gujarat.

The state owned the Gaekwar's Baroda State Railway (GBSR), which started in 1862 as the first narrow-gauge in India. It consisted of 8 miles (13 km) of narrow gauge track from Dabhoi to Miyagam.[21] A metre gauge railway line was later added. After independence in 1949 this railway merged with the Bombay, Baroda and Central India Railway.

In late 18th century, the Baroda state established a Naval set up at Billimora, a port about 40 miles south of Surat, known as Bunder Billimora Suba Armor. Here a fleet of 50 vessels was stationed, which included mostly sails, cargo vessels for trading and military vessels to secure the sea from Portuguese, Dutch and French.[6]

When political alignments changed, after the Second Anglo-Maratha war, a joint expedition of British and Baroda state troops under Colonel Walker, then resident of Baroda, approached Kathiawad in 1808, and eventually obtained bonds from the chiefs of Okha-mandal and from the maritime states of Kathiawad renouncing piracy. Then in 1813, the Baroda government acquired the parganah of Kodinar (in present Junagadh district), where at port of Velan a small fleet of four frigates with 12 pounder guns on each for the protection of the trade between Bombay and Sindh was established. These four armed vessels were named Anandprasad, Sarsuba, Anamat Vart and Anne Maria, which was purchased from the Shah of Iran, and was known as 'Shah Kai Khusru' until then.[6]

Kirti Mandir, the cenotaph of the Gaekwads in Baroda.
See also: Gaekwad dynasty

Present line of succession to the Baroda throne

The Gaekwad dynasty follows the standard of male primogeniture in matters of succession. The present line of succession is as follows:

In 2007, Gujarat State Department of Archives started digitising 600,000 files, including Baroda state registers, prints, maps, abhinandan patra or maan patra (felicitation letters) offered to the erstwhile King by different provincial states and organisation, aagna patrika (gadgets), huzur orders, and volumes of letters exchanged and agreements of the princely state with other provincial states and the British Raj, currently housed at the 'Southern Circle Record Office' at Vadodara, where a permanent exhibition had also been set up.[22]