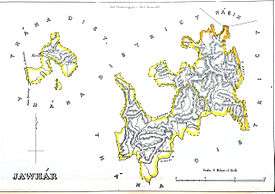 Jawhar State [1] was a Maratha princely state in India. As a princely state, it became a part of Bombay Presidency during the British Raj. It was the only state belonging to the Thana Agency. The last Princely Ruler of Jawhar at Indian independence was Raja Patang Shah V (Yeswant Rao) Mukne a Koli.[2]

The coat of arms consisted of a shield in three parts; dexter, tenne a dexter fist holding two crossed arrows (points dexter) and a bow, all argent; sinister, argent a round shield sable bordured or, in the chief argent, a sword or pointed sinister. The flag was a rectangular saffron swallow-tail with a star of eleven rays, yellow in the canton.

On 6 June 1306, Jayabha Mukne, a Poligar, took possession of the fort at Jawhar. His elder son, Dulbarrao, expanded his patrimony and conquered a large territory, controlling 22 forts, comprising most of the Nasik and Thana districts, and yielding annual revenues valued at £90,000. He received recognition as ruler by Sultan Muhammad bin Tughlaq, receiving the new name of Nimshah and the hereditary title of Raja on 5 June 1343. This event was marked by the creation of a new calendar era used within the state for over six hundred years.

The grandson of Nimshah, Deobarrao, fought a battle with the Bahmani Sultan Ahmad Shah I Wali. During his capture at Bidar, he fell in love with the Sultan's daughter. The marriage was solemnised after he converted to Islam and took the name Muhammad Shah. He returned to Jawhar and continued to rule his state unmolested, for the rest of his life. At his death, the powerful Hindu sardars and nobles refused to recognise his son as his successor, on account of his Muslim faith. In his stead, they chose the Hindu grandson of Holkarrao, the younger brother of Nimshah. Thereafter, his Hindu descendants ruled the little state in relative peace until the advent of the Maratha power.

Raja Vikramshah I met Shivaji at Shirpaumal, during the latter's march to Surat and then joined him in the plunder of that city in 1664. However, he soon fell-out with the Marathas. From then on, the Marathas slowly and steadily tightened their grip on the Mukne rulers, annexing district after district and imposing ever-increasing taxes, levies and fines. They took control of the state in 1742, 1758 and 1761. Each time releasing control to the Mukne family on condition that territories were ceded and the tribute increased. In 1782 the Raja was allowed to retain for himself, a land-locked territory in the hills, yielding no more than £1,500 to £2,000 p.a.

The advent of British rule brought a degree of stability unknown for more than a century. However, development was extremely slow, given the low level of revenue receipts and haphazard organisation of the administration. Little or no improvements were made until the reign of Patangshah IV. An enlightened and well-educated ruler, he immediately set about improving conditions, streamlining the government, building roads, schools and dispensaries. At his death in 1905, conditions had improved beyond measure.

The relatively short reigns of Patangshah's two sons, Krishnashah V and Vikramshah V, also saw steady improvements. The last named was especially diligent in improving the agricultural sector, constructing wells, securing lad rights and improving the infrastructure of the state. He contributed substantially towards the war effort during the Great War, and received a 9-gun salute in recognition of his services. His early death in 1926 ushered in a ten-year regency for his son, Yeshwantrao Patangshah V. The latter assumed full ruling powers in 1938, having received perhaps the best education by any member of his family. He continued the good work achieved under the regency by expanding development activity, encouraging the chemical, paper, textile, dyeing, printing, liquor and starch industries. The state provided free primary schooling and medical relief, ran both middle and high schools, a central library and museum, hospital and maternity home, and provided touring dispensaries for the rural areas. At the outbreak of the Second World War, the Raja immediately volunteered for service and served for four years with the RIAF.

Yeshwantrao Patangshah V assumed the title of Maharaja, shortly before he signed the instrument of accession to the Dominion of India in 1947. He then merged his state into the Bombay Presidency early in the following year. The Maharaja Medal (Maharaja Padak), awarded in a single class, was instituted by Maharaja Yeshwantrao Patangshah V in 1947 to commemorate his assumption of the title of Maharaja and to reward those who had served the state during his reign.

Patangshah V then embarked on a political career, was a member of the national parliament and the state assembly. He died in 1978 and was succeeded by his only son, Digvijaysinhrao. The latter died in 1992, leaving his only son, Mahendrasinhrao, to represent his line.