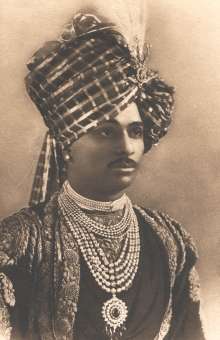 Rajkot State was one of the princely states of India during the period of the British Raj. It was a 9 gun salute state belonging to the Kathiawar Agency of the Bombay Presidency.[1] Its capital was in Rajkot, located in the historical Halar region of Kathiawar on the banks of the Aji River. Nowadays Rajkot is the fourth largest city of Gujarat state.

Rajkot was founded by Thakur Sahib Vibhoji Ajoji Jadeja of the Rajput Jadeja clan in 1620. He was the grandson of Jam Shri Satarsal (Sataji) Vibhaji Jadeja of Nawanagar.

The region was part of the Ghaznavid Empire ruled by Mohammad Ghaznavi and Muzaffarid dynasty ruled by Mahmud Begada before the Jadeja settlement. The Jadeja of Nawanagar lost the battle of Bhuchar Mori in c. 1590 CE against Mughal Empire. Thakur Sahib Vibhoji Ajoji Jadeja was sent to Delhi as prisoner after the death of his father at the battle. He was placed under the guardianship of Jodhaji Soda, who was his maternal uncle from one of Akbar's wives. He joined the Imperial forces and supported Shah Jahan in expelling the Vaghelas from Sardhar. Thereafter he married the daughter of the Vaghela chief and made Sardhar his capital. He received Ardoi, Rib, Ribda and Kalipat, which he converted into a separate principality for his services to the Emperor. His son continued in the Imperial service, receiving further lands in reward. Rajkot was named after Raju Sandhi in 1620, who was co-founder of the princely state of Rajkot with Thakur Sahib Vibhoji Ajoji Jadeja.

Thakur Sahib Vibhoji Ajoji was succeeded by Thakur Sahib Mehramanji I Vibhoji, who helped in the suppression of the Kathi tribes with Imperial forces of Mughal Empire. He was rewarded by Azam Khan, the Subedar of Gujarat with expanded borders of Rajkot state. Thakur Sahib Bamanioji Sahibji and his son Thakur Sahib Mehramanji II Bamanio were brave and skillful soldiers. They seized Rajkot and a number of villages from the Nawab of Junagadh and consolidated their control over Rajkot and its surrounding villages until 1720.

Between 1720 and 1732 Rajkot state was under Mughal occupation. Masum Khan, a deputy Faujdar of Junagadh's Nawab, conquered Rajkot in 1720 and renamed it Masumabad. He also built the fortress in 1722, which was about 4 to 5 kilometers in perimeter and its walls were 8 feet wide. Fortress was built to protect Rajkot from attack of other rulers. There used to be a wide and deep moat all around the fortress wall, which does not exist today because of ruins and relics. There were Eight Gates to Masumabad, which were studded with iron spikes on their outer side for defense purposes. These were Kotharia Naka, Nava Naka, Raiya Naka, Bedi Naka, Bhichari Naka, Sardhar Naka and Pal no Darwajo. Further, there was a gate without spikes called Khadaki Naka near the Nakalank Temple. Debris of fort wall can be seen in the bastion in Ramnath para area. Gates of Bedi Naka and Raiya Naka were modified during the colonial times. The chief Engineer of the British Agency, Sir Robert Bell Booth, renovated Bedi gate and Raiya Naka gate and built the present three storied clock towers in 1892. Town within the gates and to the west of Aji River was the old fortified town of Rajkot. Masum Khan ruled for 12 years until he was conquered by Thakur Sahib Ranmalji Mehramanji in 1732.[2]

Masumabad was reconquered by Thakur Sahib Ranmalji Mehramanji in 1732 and the name was restored to Rajkot. Thakur Ranmalji's son and successor, Lakhoji I, succeeded him in 1746. He later abdicated in favour of his eldest son but resumed the throne when the latter died unexpectedly in 1794. Displeased with his grandfather's action, Ranmalji II deposed him and expelled him to Nawanagar. Thereafter, the family reigned uneventfully, accepted British protection in 1818, and quietly developed their little state. The capital became the headquarters of the British Political Agent, and soon developed into a modern town. It became an important centre of education, with several famous institutions being established there. 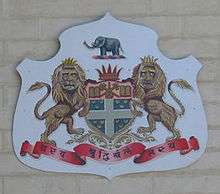 Emblem of the Rajkumar College, Rajkot

In 1807 Rajkot State became a British protectorate. His Highness Bavajirajsinhji Mehramanji and his son, Lakhajirajsinhji II Bavajirajsinhji, were model rulers who slowly developed their state into a haven of liberal learning, discourse and intellectual activity. The state became a favourite venue for meetings of various India wide political, cultural and intellectual organisations. The British constructed many impressive colonial buildings and educational institutions, which are Connaught Hall, Masonic Hall, Lang Library, Watson Museum and The Rajkumar College. Peasant, youth, farmers' and citizens' councils were encouraged and prospered. However, all this changed when His Highness Thakur Saheb Dharmendrasinhji Lakhajiraj succeeded his father in 1930. Although he received a liberal education and was the first of his line to be sent abroad, his interests and inclination were the reverse of his father and grandfather. The British authorities restricted him from exercising full powers for a year and placed him on probation, but he gave full vent to his proclivities when he received full powers a year later. He taxed his subjects heavily, hoarded goods then sold them at inflated prices to his own subjects after creating scarcity, then frittered away the proceeds on his own pastimes.

Unlike his father, who lived frugally and spent practically the entire revenue on developing his state, Dharmendra used 50% of the state funds on himself. Not surprisingly, he became the butt of many demonstrations, strikes and boycotts, organised by Congress and other left-wing organisations. Mahatma Gandhi did fasting to ask to form people's council and liberation of people of Rajkot at Rashtriya Sala in 1939. Thakur Sahib Dharmendrasinhji's early death in 1940 while hunting lions in Sasan Gir, came as relief to his subjects.

His Highness Thakur Saheb Pradyumansinhji Lakhajiraj tried his best to reverse his late brother's failures, but time and circumstances were not on his side. Although he did manage to improve the lot of his subjects, War conditions hampered progress for several years. No sooner had the Second World War ended, before the events of partition, independence and merger overtook any plans he had. The state merged with its neighbours to form the United State of Saurashtra in February, 1948 and then after Rajkot became the capital of the State of Saurashtra headed by U. N. Dhebar as chief Minister and Jam Saheb of Navanagar as Raj Pramukh in 1948.[3]

The rulers of Rajkot were titled 'Thakur Sahib'[4] with the style of 'His Highness.[5]

The city of Rajkot became the headquarters of the Western India States Agency in 1924.

Agents of the Governor-general for the Western India States Agency