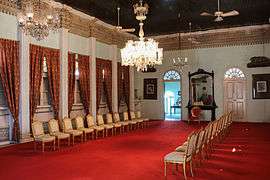 Interior of the Naulakha Palace. 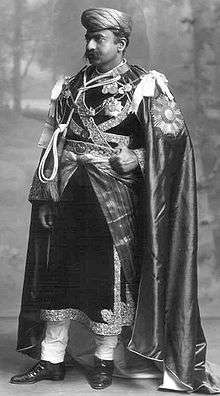 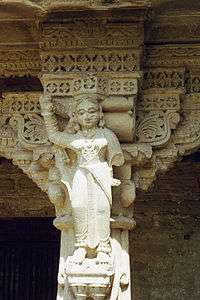 A bracket figure at the Naulakha Palace.

Gondal State was one of the eight first class princely states of Kathiawar Agency, Bombay Presidency in British India. Ruled by a Hindu Rajput dynasty of the Jadeja clan, the capital of the state was Gondal town.

Gondal State was established in 1634 AD by Thakore Shri Kumbhoji I Meramanji from a Hindu Rajput dynasty of the Jadeja clan, who received Ardoi and other villages from his father Meramanji.

With his fourth descendant Kumbhoji IV, the State raised itself, by acquiring the parganas of Dhoraji, Upleta, Sarai, and Patanvav,among others. The last ruler of Gondal State, Maharaja Bhojrajji Bhagwatsimhji, signed the instrument of accession to the Indian Union on 15 February 1948.[1]

The rulers of Gondal were Thakurs of the Jadeja dynasty who had the right to an 11 gun salute. They bore the title 'Thakur Sahib' from 1866 onwards.[2]