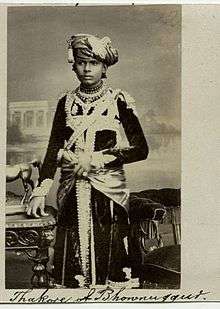 A Thakur of Bhavnagar in the 1870s

Bhavnagar State was a princely state in Saurashtra during the British Raj. Its last ruler signed the accession to the Indian Union on 15 February 1948.[1]

The Bhavnagar State Railway was named after this state.

The Gohil Rajput of the Suryavanshi clan faced severe competition in Marwar. Around 1260 AD, they moved down to the Gujarat coast and established three capitals; Sejakpur (now Ranpur), Umrala and Sihor.[2] Sejakpur was founded in 1194.

In 1722–1723, forces led by Khanthaji Kadani and Pilaji Gaekwad attempted to raid Sihor but were repelled by Maharaja Bhavsinhji Gohil. After the war Bhavsinhji realised the reason for repeated attack was the location of Sihor. In 1723, he established a new capital near Vadva village, 20 km away from Sihor, and named it Bhavnagar after himself. It was a carefully chosen strategic location because of its potential for maritime trade. Naturally, Bhavnagar became the capital of Bhavnagar State. In 1807, Bhavnagar State became a British protectorate.[3][4]

The old town of Bhavnagar was a fortified town with gates leading to other important regional towns. It remained a major port for almost two centuries, trading commodities with Mozambique, Zanzibar, Singapore, and the Persian Gulf.

Bhavsinhji ensured that Bhavnagar benefited from the revenue that was brought in from maritime trade, which was monopolised by Surat and Cambay. As the castle of Surat was under the control of the Sidis of Janjira, Bhavsinhji brokered an agreement with them, giving the Sidis 1.25% of the revenue by Bhavnagar port. Bhavsinhji entered into a similar agreement with the British when they took over Surat in 1856.Whilst Bhavsinhji was in power, Bhavnagar grew from a small chieftainship to a considerably important state. This was due to the addition of new territories as well as the income provided by maritime trade. Bhavsinhji's successors continued to encourage maritime trade through Bhavnagar port, recognising its importance to the state. The territory was further expanded by Bhavsinhji's grandson, Vakhatsinhji Gohil when he took possession of lands belonging to Kolis and Kathis, obtained Rajula from the Navab Saheb Ahmad Khan, and merged Ghogha Taluka into the state. In 1793, Vakhatsinhji conquered the forts of Chital and Talaja, and later conquered Mahuva, Kundla, Trapaj, Umrala and Botad. Bhavnagar remained the main port of the state, with Mahuva and Ghogha also becoming important ports. Because of the maritime trade, the state prospered compared to other states. During the late 19th century, the Bhavnagar State Railway was constructed. This made Bhavnagar the first state that was able to construct its railway system without any aid from the central government, which was mentioned in the Imperial Gazetteer. Mr Peile, a political agent, described the state as follows: "With flourishing finances and much good work in progress. Of financial matters I need say little; you have no debts, and your treasury is full."[5] Between 1870 and 1878 the state was put under joint administration, due to the fact that Prince Takhtsinhji was a minor. This period produced some notable reforms in the areas of administration, revenue collection, judiciary, the post and telegraph services, and economic policy. The ports were also modernised. The two people who were responsible for those reforms were Mr E. H. Percival of the Bombay Civil Service and Gaurishankar Udayshankar, Chief Minister of Bhavnagar State Bhavngar Boroz.

In 1911, HH Maharani Nundkanvarba of Bhavnagar, was awarded the Order of the Crown of India, the highest Imperial award for women of the Empire. The former princely state of Bhavnagar was also known as Gohilwad; "Land of the Gohils" (the clan of the ruling family).

Merger with the Indian Union in 1947

Until the independence of India in 1947, Bhavnagar was an independent state ruled by the Rajput Gohil family. In 1947, the Deputy Prime Minister of the newly independent Indian Union Sardar Vallabhbhai Patel undertook the ambitious and complex process of unifying 565 princely states with the Union of India. The last Maharaja of Bhavnagar, Krishnakumar Sinhji handed over the administration of his Bombay State to the people's representative in 1948.

The erstwhile royal family of Bhavnagar continues to lead an active role in the public eye as well as in business (hotels, real-estate, agriculture & ship-breaking) and is held in high regard by the population both in the city as well as areas that comprised the former princely state of Bhavanagar.[6]

Bhavnagar State was ruled by Rajputs belonging to the Gohil dynasty.[7]