Cambay State in The Imperial Gazetteer of India 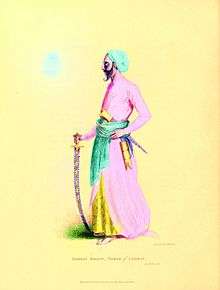 Cambay or Kambay was a princely state during the British Raj. The town of Khambat (Cambay) in present-day Gujarat was its capital. The state was bounded in the north by the Kaira district and in the south by the Gulf of Cambay.

Cambay was the only state in the Kaira Agency of the Gujarat division of the Bombay Presidency, which merged into the Baroda and Gujarat States Agency in 1937.

Cambay was founded as a state in 1730 by the penultimate Nawab of the Mughal Empire, Mirza Ja‘far Mu’min Khan I, the last of the Mughal governors of Gujarat, at the time of the dismemberment of Mughal rule in India. In 1742 Mirza Ja‘far Mu’min Khan I defeated his brother-in-law Nizam Khan, governor of Khambhat, and established himself in his place.

In 1780 Cambay was taken by the British Army, led by General Goddard Richards, but it was restored to the Marathas in 1783. Finally it was ceded to the British by the Peshwa after the Treaty of Bassein in 1803.[1] Cambay became a British protectorate in 1817. The state was provided with a railway in 1901.[2] Cambay's last ruler signed the accession to the Indian Union on 10 June 1948.[3]

Cambay State was ruled by the Najm-i-Sani Shia' Muslim dynasty. The rulers of the state bore the title of 'Nawab' and had the privilege of an 11-gun salute.[4]