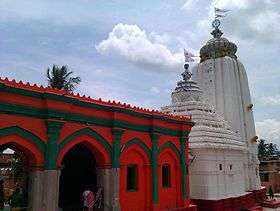 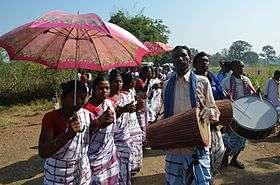 Dance of the Santal people in the Mayurbhanj area. 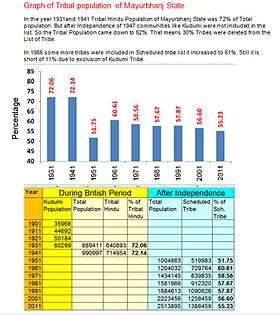 The state included a vast mountainous area inhabited by many different people groups such as the Santal, Ho and Kisan people.[2] Its former territory lies in the present-day state of Odisha, bordering West Bengal. The capital of the state was the town of Baripada since the 15th century and Daspur was another important town. Large tracts of Mayurbhanj State were covered with forest.

According to tradition the kings of Khijjinga Mandala, the predecessor state, had ruled in unbroken succession since about the 9th century AD. The state had been named after its capital, Khijjinga Kotta, today Khiching. Copper plate inscriptions issued by the ancient rulers indicate that Khijjinga Mandala was an extensive territory comprising the present Mayurbhanj and Kendujhar districts as well as parts of Singhbhum district in Bihar and Midnapore district in West Bengal. During the Mughal period, the territory of the Bhanja rulers extended as far as the Bay of Bengal. By that time, the capital had shifted from Khijjinga Kotta to Haripur. The ruins of the temples and palaces built then can be found at Haripur about 16 km southeast of Baripada. Among the ruins, the Rasikaraya temple and the Durbar hall of the Bhanj kings are the most significant.

The rulers were Rajputs of the Bhanj dynasty,[3] tradition saying that since the mythical founder Sila Bhanja Angaddi they were the longest reigning clan of monarchs in the area.[4] Since they very good relations with the Mayur kings of Kendujhar, the Mayurs and the Bhanjas joined and gave origin to the name of the state.

The Bhanj rulers were promoters of art, architecture and culture. The Hari Baladev Jiu Temple, the Khichhing temple and other architecture in and around the district stand testimony to this. Also the royal family was responsible for the development and promotion of the Chhau dance form which integrates martial, tribal and classical elements.[5]

Mayurbhanj State had been under Maratha rule during the 18th century and became a British protectorate in 1829, many years after the Third Anglo-Maratha War. During the British Raj the kings of Mayurbhanj pioneered the upliftment of the region. Under their enlightened rule Mayurbhanj became one of the most progressive areas. The Bhanj kings established the first medical college of the state in Cuttack, donating funds and land for the establishment of higher education institutions such as Ravenshaw College and welfare schemes, such as the one undertaken by the Evangelical Missionary Society of Mayurbhanj (EMSM), established in 1895 at the instance of Maharaja Sriram Chandra Bhanj Deo.[6] Mayurbhanj Palace was built by Maharani Sumitra Devi Bhanj Deo in 1804.[7]

The Mayurbhanj State Railway was started by the erstwhile ruler of Mayurbhanj Maharaja Shri Sriram Chandra Bhanj Deo. The first section of 52 km from Rupsa to Baripada railway station being opened for traffic on 20 January 1905.[8]

The rulers of Mayurbhanj State bore the title of 'Raja' from mid 19th century and the title of 'Maharaja' from 1910 until the last head of the state.[9] They were entitled to a 9 gun salute.[10]