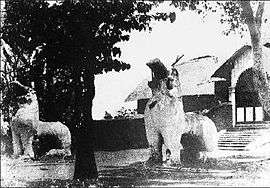 Kangla Uttra Sang at the Kangla Fort, former residence of the Manipur kings. The two Kangla-Sa Pakhangba dragons standing at the gate were destroyed after the Anglo-Manipur War of 1891 but have been restored in recent years. 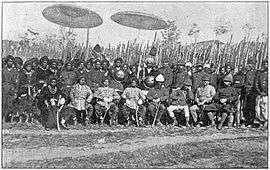 The princes of Manipur, Col. Johnstone, Thangal Major and the European officer in Kohima after relieving the fort from the siege of the Nagas, 1880. 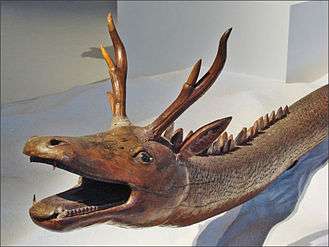 Pakhangba, a heraldic dragon of the Meithei tradition and an important emblem among Manipur state symbols. 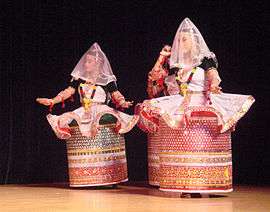 The Manipuri dance was formerly patronized by the royal house of Manipur. 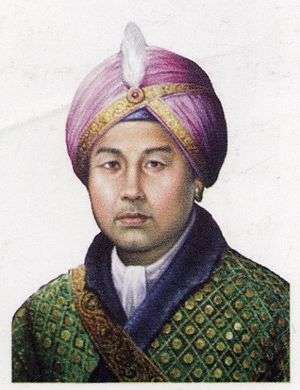 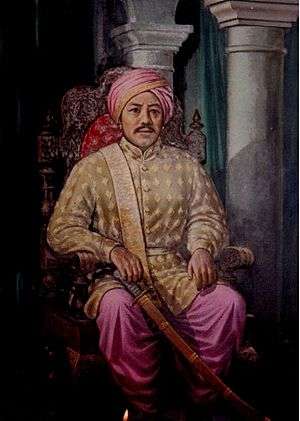 The Kingdom of Manipur was a princely state of the British Rule, bordering Assam Province in the west and British Burma in the east. The state of Manipur covered an area of 21,900 km² with 467 villages. The capital of the state was Imphal.

The early history of Manipur is composed of mythical narratives. The Kangla Fort, located on the banks of the Imphal River, was where the palace of King Pakhangba was located. It was built in 1632 by king Khagemba, who had defeated Chinese invaders. In the fort are a number of temples that had traditional religious significance. Kangla means "dry land" in the Meetei language.

The history of Manipur is obscure; Royal dynasty records such as the Cheitharol Kumbaba were composed after Manipur became a Hindu Kingdom and are mostly based on myths.[1]

The Kingdom of Kangleipak was established by King Loiyumba in 1110 who ruled between 1074 and 1121. He consolidated the kingdom by incorporating most of the principalities in the surrounding hills and is credited with having enacted a kind of written constitution for his state.[2] After subjugating all the villages within their valley Kangleipak kings grew in power and began a policy of expansion beyond their territory. In 1443 King Ningthoukhomba raided Akla, an area ruled by Shan people, initiating a policy of Manipuri claims to the neighbouring Kabaw Valley.[2] The zenith of the Kangleipak State was reached under the rule of King Khagemba (1597-1652).

In 1714 a king of adopted by Naga origin named Meidingu Pamheiba, adopted Hinduism as the state religion and changed his name to Gharib Nawaz. In 1724 the Sanskrit name Manipur ('the Abode of Jewels') was adopted as the name of the state. King Gharib Nawaz made several incursions into Burma, but no permanent conquest. After the death of Gharib Nawaz in 1754, Manipur was occupied by the Kingdom of Burma and the Manipuri king Jai Singh (Ching-Thang Khomba) sought help from the British. The latter, however, recalled the military force sent to assist Manipur and after that years passed without much contact between Manipur State and the British authorities.[1] Manipur was invaded at the onset of the First Anglo-Burmese War, together with Cachar and Assam.

Following the Burmese invasions, in 1824 the king of Manipur Gambhir Singh (Chinglen Nongdrenkhomba) asked the British for help and the request was granted. Sepoys and artillery were sent and British officers trained a levy of Manipuri troops for the battles that ensued. After the Burmese were expelled, the Kabaw Valley down to the Ningthi River was added to the state.[1] In 1824 Manipur became a British protectorate and in 1826 peace was concluded with Burma. Manipur remained relatively peaceful and prosperous until King Gambhir Singh's death in 1834. When he died his son was only one year old and his uncle Nara Singh was appointed as regent. That same year the British decided to restore the Kabaw Valley to the Kingdom of Burma, which had never been happy about the loss. A compensation was paid to Raja of Manipur in the form of an annual allowance of Rs 6,370 and a British residency was established in Imphal, the only town of the state, in 1835 in order to facilitate communication between the British and the rulers of Manipur.[1]

After a thwarted attempt on his life, Nara Singh took power and held the throne until his death in 1850. His brother Devendra Singh was given the title of Raja by the British, but he was unpopular. After only three months Chandrakirti Singh invaded Manipur and rose to the throne, while Devendra Singh fled to Cachar. Numerous members of the royal family tried to unsettle Chandrakirti Singh, but none of the rebellions was successful. In 1879, when British Deputy Commissioner G.H. Damant was killed by an Angami Naga party, the king of Manipur assisted the British by sending troops to neighbouring Kohima. Following this service to the crown, Chandrakirti Singh was rewarded with the Order of the Star of India. The Kabaw Valley was restored to the Manipur Kingdom after the British decided to dispose of the ruling dynasty in Burma in 1885, forcing the last Burmese King to abdicate and ignominiously exiling the royal family to India. This event was followed the same year by the Third Anglo-Burmese War, when the British annexed all of Burma.[1]

The British decided to recognize Juvraj Kulachandra Singh as Raja, and to send a military expedition of 400 men to Manipur in order to punish Senapati Tikendrajit Singh as the main person responsible for the unrest and the dynastic disturbances. This action and the violent events that followed are known in British annals as the 'Manipur Expedition, 1891',[3] while in Manipur they are known as the 'Anglo-Manipur War of 1891'.

The British attempt to remove Tikendrajit from his position as military commander (Senapati) and arrest him on 24 March 1891 caused a great stir. The British Residency in Imphal was attacked and the Chief Commissioner for Assam J.W. Quinton, Col. Sken and three other British officials were murdered. In the middle of the unrest Ethel St Clair Grimwood, the widow of Frank St Clair Grimmond, the killed British Resident, successfully led a party of surviving sepoys out of Manipur to Cachar.[4] Without much delay, a 5,000 strong punitive expedition was sent against Manipur on 27 April 1891. Three British columns entered Manipur from British Burma, Cachar and the Naga Hills, which after several skirmishes with the 3,000 men strong Manipuri army, managed to pacify the kingdom. Following the British attack Senapati Tikendrajit and young king Kulachandra fled, but were captured. The Senapati and those Manipuris who had been involved in the killing of the British officers were tried and hanged, while the deposed King Kulachandra and other leaders of the rebellion were sent to the Cellular Jail in the Andaman Islands. At this time, and until and 22 September 1891, Manipur was briefly annexed to British India by virtue of the doctrine of lapse. On 22 September 1891 when Meidingngu Churachand (Churachandra), a 5-year-old boy, was put on the throne, power was restored nominally to the Manipuri crown over the state. During the dynastic disturbances and the British intervention the Naga and Kuki hill tribes of the state lapsed into lawlessness, with numerous instances of murder and arson in the mountain villages, a situation that lasted well until 1894.[1]

The 20th century: Twilight and end of the princely state

The child ruler Churachand belonged to a side branch of the Manipur royal family, so that all the main contenders to the throne were bypassed. While he was a minor the affairs of state were administered by the British Political Agent, which facilitated the introduction and implementation of reforms. The first paved road to Manipur was inaugurated in 1900 —until then there had been no proper roads to reach the kingdom— and this improvement in communication facilitated a visit by Viceroy Lord Curzon in 1901. Raja Churachand was formally declared king in 1907 after completing education in Ajmer.[1] In 1918 he was given the privilege to use the title 'Maharaja' and during his reign Manipur enjoyed a period of relative peace and prosperity. In 1934 king Churachand was knighted by the British, becoming 'Sir Churachandra Singh.[5]

Between March 1944 and July 1944 part of Manipur and the Naga Hills District of Assam Province were occupied by the Imperial Japanese Army. The capital Imphal was shelled on 10 May 1942.

The last ruler of the Kingdom of Manipur was Maharaja Bodhchandra Singh. He ruled between 1941 and 1949, year in which a popular movement forced him to convene a representative assembly. Following his abdication the Princely State of Manipur was extinguished and absorbed by the Government of India and the assembly was abolished. Bodhchandra was succeeded by Maharaja Okendrajit Singh, not anymore a princely ruler after the privileges of the native princes were abolished.

On 15 August 1947, with the lapse of paramountcy of the British Crown, Manipur became briefly independent. A 'Manipur State Constitution Act,1947' was enacted, giving the state its own constitution, although this did not become known in other parts of India owing to the relative isolation of the kingdom.[6] A few Manipuris favoured integration with India and established the Manipur India Congress, a party which failed to draw any votes in the election of 1948.

Maharaja Bodhchandra was invited to Delhi, along with other rulers of princely states, to discuss the future of his kingdom and was convinced to sign the instrument of accession on 21 September 1949, which would take effect on 15 October the same year. The integration had not been ratified by the representative assembly of Manipur, which was anyway abolished following the onset of the accession. On 15 October 1949, Manipur State acceded to the Indian Union as a Part C State, the lowest category of constituent units of India —that later would become Union Territories— which were put directly under the administration of the centre.[7]

The Kabaw Valley, a disputed border territory, was ceded to Burma by India in 1953. Unhappy about central rule, Rishang Keishing began a movement for representative government in Manipur in 1954. The Indian home minister, however, declared that the time was not yet ripe for the creation of representative assemblies in Part C States such as Manipur and Tripura, claiming they were located in strategic border areas of India, that the people were politically backward and that the administration in those states was still weak.[7] Finally, in 1972, after fourteen years of direct Indian rule, Manipur became a separate state within India.[5]

The rulers of Manipur state were entitled to an 11-gun salute by the British authorities. The present dynasty began in 1714.[8]

There were two feudatory kings during the time of the Burmese invasions.

The Indian Agents were subordinated to the governor of Assam.

The Dewans were representing the governors of Assam.

The State of Manipur had a set of two flags, a white one and a red one. All featured the Pakhangba dragon in the centre, although not as prominently in the latter flags.[10]