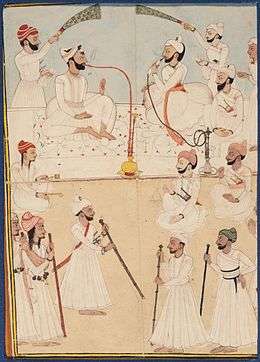 Raja Ranjit of Suket and Raja Shamsher Sen of Mandi in the Darbar; ca. 1772

Suket State was one of the Princely states of India during the period of the British Raj. The capital of the state was Sundar Nagar. Its last ruler signed the accession to the Indian Union on 15 April 1948. Formerly it belonged to the States of the Punjab Hills and currently, it is part of the Indian state of Himachal Pradesh. The present-day Mandi district was formed with the merger of the two princely states of Mandi and Suket.

According to tradition the predecessor state was founded about 765[1] by Bira Sen (Vir Sen), claimed to be a son of a Sena dynasty King of Bengal. The early history of Suket was marred by constant warfare against other principalities, especially against the Kingdom of Kullu. At the time of Raja Bikram Sen Kullu was under the overlordship of Suket State and was reduced to paying tribute to Suket. Raja Madan Sen's reign was the golden age of Suket, when its ruler reduced into submission the neighboring smaller states. During the reign of Raja Udai Sen Suket came under the influence of the Mughal Empire who were content with merely exacting tribute.

At the time of Raja Bikram Sen II, Sukket survived the invasion of the Gurkhas of Nepal (1803 to 1815) and the ensuing brief period of Sikh dominance thanks to the Raja's diplomatic skills. In 1845, when war broke out between the Sikhs and the British, the Rajas of Suket and Mandi took the side of the British, signing a Treaty of Alliance in Bilaspur in 1846. In the same year a sanad was granted to Raja Ugar Sen II confirming him and his heirs in the possession of the Suket territories.[2]

The rulers of Suket bore the title 'Raja'.[3] The clan name of the royal lineage was 'Suketi' or 'Suketr'.[4]