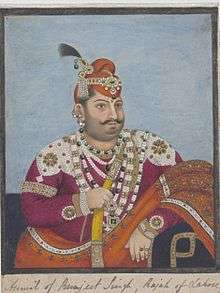 Portrait of Ishwari Sen of Mandi

Mandi State was a princely state within the Union of India from 1950 to 1956 with Bilaspur as its capital. The state of Mandi (the name means "market" in Hindi), which included two towns and 3,625 villages, was part of the States of the Punjab Hills. It was located in the Himalayan range, bordering to the west, north, and east on the British Punjabi district of Kangra; to the south, on Suket; and to the southwest, on Bilaspur. As of 1941, population of Mandi State was 232,598 and area of the state was 1,139 square kilometres (440 sq mi).[1]

Around 1290 the Rana of Banglaor succeeded to Siokot state. The new capital of the state, Mandi, was founded and the state took the name of its capital. The last ruler of Mandi signed the accession to the Indian Union on 15 April 1948.[2] Later by passing of The Himachal Pradesh and Mandi (New State) Act, 1954, the Mandi State was dissolved on 1 July 1954 and incorporated into the State of Himachal Pradesh as Mandi district, with an area of 2,950 square kilometres (1,140 sq mi).