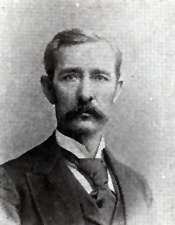 Waugh was born Daniel Webster Waugh near Bluffton, Indiana to Archibald Burnett Waugh (1812-1881) and Nancy Sutton (1818-1864), one of four boys and attended local schools. He entered into the military in 1861 by enlisting in the Union Army. Waugh served in Company A, 34th Regiment, Indiana Volunteer Infantry and he was honorably discharged in September 1864. He married Alice Elizabeth Grove March 7th, 1870. She was born December 1852 in Ohio. She died January 13th, 1928 in Tipton, Indiana; buried in Tipton, Indiana. They had four children, three daughters who lived to maturity.

Waugh was both a teacher and a farmer before being admitted to the bar in 1866. He moved to Tipton, Indiana in 1867, where he practiced law. He also served as a judge of the thirty-sixth judicial circuit from 1884 to 1890.

He was elected as a Republican to the Fifty-second and Fifty-third Congresses (March 4, 1891-March 3, 1895). He declined candidacy for his renomination in 1894.

He practiced law until his retirement. He died in Tipton, Indiana on March 14, 1921. He is interred in the mausoleum adjoining Green Lawn Cemetery.