During the 1980s and early 1990s, he worked as a congressional aide to Dan Coats and committee staff director. He was elected to his congressional seat in 1994. On May 18, 2010, Souder announced his resignation from Congress effective May 21, 2010, after admitting to an affair with one of his part-time female staff members.[2] The resignation was accepted by Speaker of the House Nancy Pelosi on May 18, 2010, ending Souder's time in office.[1]

Souder was born in Grabill, Indiana, the son of Irma (née Fahling) and Edward G. Souder.[3][4] He attended Leo Junior/Senior High School, Indiana University-Purdue University Fort Wayne and the University of Notre Dame. While in college, he was a member of the Young Americans for Freedom. After graduating from college, Souder worked as a marketing manager and small business owner.

From 1974 to 1976, Souder served as marketing manager for Gabbort's Furniture. Since 1976, he has been the owner of Souder's General Store, also known as Historic Souder's of Grabill.[5] Souder served as an aide for United States Representative Dan Coats from 1983 to 1984; as minority staff director of the House Select Committee on Children, Youth and Families from 1985 to 1988; and again as an aide for Coats from 1988 to 1993, staying with Coats when he became a United States Senator in 1989.[6] 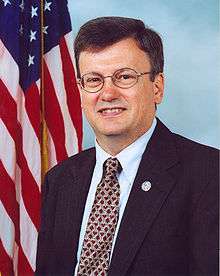 Souder was elected to the United States House of Representatives as a Republican in November 1994, and was re-elected in every election thereafter until his resignation in 2010. This is the only elected office he has ever held. He originally ran on a signed pledge with America that he would not serve more than two additional terms.[7] He was regarded as a staunch advocate of abstinence education and family values.[8][9]

Souder was the Ranking Member on the House Homeland Security Subcommittee on Border, Maritime, and Global Counterterrorism. He was also a senior member of the House Oversight and Government Reform Committee and the House Education and Labor Committee. Along with U.S. Rep. Brian Baird (D-WA), he was co-founder and co-chairman of the Congressional National Parks Caucus. He was also co-founder and co-chairman of the Congressional Caucus on Drug Policy.

Until the start of the 110th Congress, Souder was chairman of the House Government Reform Subcommittee on Criminal Justice, Drug Policy and Human Resources. The subcommittee had authorizing jurisdiction over the White House Office of National Drug Control Policy (ONDCP, known popularly as "the Drug Czar's Office"), and it oversaw all U.S. Government anti-narcotics operations, both foreign and domestic. In addition, the panel had broad oversight authority (covering the National Park Service, the White House Office of Faith-Based and Community Initiatives, public health programs, the Smithsonian Institution, etc.).

In March 2006, President George W. Bush signed into law the Combat Methamphetamine Epidemic Elimination Act, which represented the most comprehensive anti-meth legislation ever passed by Congress. Souder authored much of this law, which targets meth trafficking at local and state, national, and international levels.

In December 2006, Bush signed into law the ONDCP Reauthorization Act, which Souder had authored and introduced. The law reauthorizes the office of "the Drug Czar" for five years.

On May 18, 2010, Souder announced he would resign from Congress effective Friday, May 21, after admitting to an affair with Tracy Meadows Jackson, a married female staffer.[10][11][12][13][14][15] Famously, he and Ms. Jackson had made a public video in which they both extolled the virtues of abstinence.[16][17] In a written statement released that morning, Souder said:

It is with great regret I announce that I am resigning from the U.S. House of Representatives as well as resigning as the Republican nominee for Congress in this fall's election....I sinned against God, my wife and my family by having a mutual relationship with a part time member of my staff. I am so shamed to have hurt those I love.[13]

Souder deviated from his written statement when reading it aloud to the Fort Wayne press later in the morning to explain why, unlike many legislators admitting adultery, he did not have his wife of 30 years at his side:

"I'm sick of politicians who drag their spouses up in front of the cameras rather than confronting the problem they caused."[18]

Souder has said that an actual voting record in Congress is more valuable than claimed positions on issues. His 1994 issues profile is available in the project archives.[19]

In 2004, Souder said in an interview that "the closer to the clearness of the Bible, the less ability I should have to compromise. So I view, on abortion, there's really not much room to compromise." He said, regarding Israel, "[T]he bottom line is, they're God's chosen people. He's going to stand with them. The question is: Are we going to stand with them?"[20] Souder also applied for non-combatant status during the Vietnam War on religious grounds. His draft number was never called.

Souder is a supporter of the War on Drugs. He authored and championed the Aid Elimination Penalty (also known as the Drug-Free Student Loan amendment), enacted in 1998 as part of the reauthorization of the Higher Education Act. The provision suspends eligibility for federal financial aid to college students convicted of drug-related offenses. Mark Souder describes the program as:

The law has affected more than 200,000 students, including 9,000 Indiana students — one in every 200 applicants from that state. (This is the highest percentage of students affected among all 50 U.S. states.) In almost all cases, the suspensions of eligibility for aid are based on applicants checking a box saying that they have a drug conviction, or failing to check the box saying that they do not, rather than an actual check of criminal records. Following an amendment in 2006, only students who are enrolled in college and receiving financial aid at the time of their conviction may have their aid suspended (prior to 2006, the law was applied regardless of when a drug conviction occurred). Students may resume eligibility after a period of time (for example, after one year if convicted of possession of a controlled substance) or if they complete a drug rehabilitation program approved by the U.S. Department of Education. Before the 2006–2007 academic year, the provision could also apply to high school students, but this changed with the passage of the Deficit Reduction Act in 2001.[22] In early 2006, Souder added, to a bill about the office of the drug czar, a provision calling for the fungus Fusarium oxysporum to be used as a biological control agent against drug crops in foreign countries. Several federal and state agencies have previously rejected such use of the fungus because it is highly prone to mutation.[23]

A research report by the National Bureau of Economic Research found the law has had no impact on drug usage among young people, and that it acts as a strong deterrent to college attendance, severely limiting the ability of people to better their lives through education.[24]

On February 9, 2007, Souder appeared as a guest on MSNBC's The Situation With Tucker Carlson.[25] Souder was asked specifically why marijuana is such a focus of anti-drug campaigns. Of today's marijuana, in regard to its addictiveness and THC content, Souder said that "the destruction in your brain cells, is more like coke or crack than it is like the old time marijuana." Souder said that the high THC content of today's marijuana makes it much stronger than "the ditch weed" of the 1960s and 1970s. The congressman later went on to say "No drug user is a single drug user" and "a marijuana user is very seldom just a casual marijuana user", to which Carlson said that, based upon users he knows, Souder was wrong.

In June 2007, Souder called for a drawdown of US troops in Iraq. Two months later, he became the fourth Republican U.S. Congressman to call for Idaho Republican Senator Larry Craig's resignation after the discovery of lewd activities in a Minneapolis/St. Paul airport restroom and subsequent allegations questioning Craig's sexuality.

In October 2007, in the Fort Wayne, Indiana mayoral race, Souder endorsed fellow Republican Matt Kelty. Souder, however, withdrew his official support for Kelty in October 2007 because of Kelty's campaign finance law problems and a birthday cake frosted with a crude joke[26] which was given to Kelty by several Republicans and garnered controversy. Souder said that the joke cake was "immature."[27][28]

In his initial campaign for Congress in 1994, Souder pledged his support for term-limit legislation.[29] He served four terms (1995–2003) representing Indiana's 4th congressional district. In 2002, after redistricting based on the 2000 census, Souder was elected to represent Indiana's 3rd congressional district. He won re-election there in 2004 and, in 2006, was elected to his seventh term in the House.

In the 2006 general election, Souder's Democratic opponent was Fort Wayne City Councilman and military veteran Tom Hayhurst, an MD who contributed $200,000 to his own campaign.[30] Souder won 54% to 46%, carrying all eight counties in his congressional district. The 2006 election was significantly different from 2004, when the 3rd district voted 68%-32% for George W. Bush over John Kerry, and re-elected Souder 69%-31% (when Souder faced Maria Parra, a Democrat who made national headlines when she walked off the stage during a televised debate).

In 2008, Souder was re-elected to an eighth term in the U.S. House. Souder defeated Democrat Mike Montagano and Libertarian William Larson.