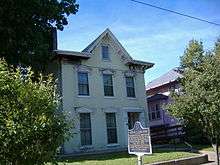 Michael Crawford Kerr (March 15, 1827 – August 19, 1876) was an American legislator, and the first Democratic Speaker of the United States House of Representatives after the Civil War.

He was born at Titusville, Pennsylvania and educated at the Erie Academy. He graduated from the University of Louisville School of Law in 1851. He moved to New Albany, Indiana in 1852 and was a member of the State Legislature from 1856 to 1857.

He was elected to Congress in 1864 as a War Democrat, having vigorously opposed the Copperhead element in his district. He won the praise of Republican Governor Morton for helping suppress illegal conspiracies by Copperheads.[1]

Kerr served in the United States House of Representatives as a Democrat from Indiana from 1865 to 1873. In Congress he was looked upon as one of the leaders of the Democratic party. He strongly opposed the Republican policy of Reconstruction in the Southern States. He was not re-elected in 1872.

His hard money views on financial questions did not meet with favor in his agrarian constituency, where he openly antagonized the inflationists and the Greenback element and favored the resumption of specie payments. In 1874, however, after a sharp contest he won the seat back, and on his re-entry into Congress was elected to the speakership. He presided as Speaker at only the first session of the Forty-fourth Congress and died of consumption shortly after its adjournment.