Called to active duty from the US Army Reserve June 21, 1941, with the rank of captain and served with a tank company throughout the Pacific campaign, receiving the Silver Star. After the war, he was transferred to Military Government and served nine months in Korea as deputy property custodian. Bray was released from active duty in November 1946 with the rank of colonel. He returned to private law practice in Martinsville, Indiana.

Bray was elected as a Republican to the Eighty-second and to the eleven succeeding Congresses (January 3, 1951 – January 3, 1975). He was an unsuccessful candidate for reelection in 1974 to the Ninety-fourth Congress. He resumed the practice of law.

Named to be a commissioner to the American Battle Monuments Commission by President Gerald Ford from 1975 to 1978. 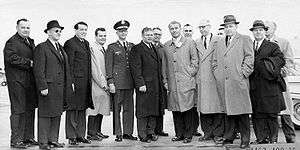 Representative Bray and other members of the House Committee on Science and Astronautics visit the Marshall Space Flight Center on March 9, 1962 to gather first-hand information of the nation's space exploration program.