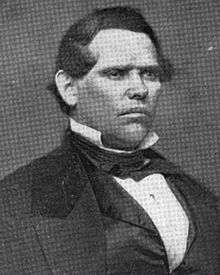 Andrew Jackson Harlan (March 29, 1815 – May 19, 1907) was a U.S. Representative from Indiana and later a member of the Missouri House of Representatives. He was a cousin of Aaron Harlan.

Born near Wilmington, Ohio, Harlan attended the public schools. He studied law, was admitted to the bar in 1839 and commenced practice in Richmond, Indiana. He moved to Marion, Indiana, in 1839. He served as clerk of the Indiana House of Representatives in 1842 and a member 1846-1848.

Harlan was elected to the Thirty-third Congress (March 4, 1853 – March 3, 1855). He served as chairman of the Committee on Mileage (Thirty-third Congress). In a Democratic congressional convention at Marion, Indiana in 1854, he was publicly read out of the Democratic Party for voting against the repeal of the Missouri Compromise. He declined the nomination from the People's Party in 1854 for the Thirty-fourth Congress, and afterward allied himself with the Republican Party.

He moved to Dakota Territory in 1861, where he served as member of the Territorial house of representatives in 1861 and served as speaker. He was driven from the Territory by the Indians in September 1862 and settled in Savannah, Missouri, where he resumed the practice of law. He served as member of the Missouri House of Representatives 1864-1868, serving as speaker the last two years. He moved to Wakeeney, Kansas, in 1885 and practiced law. He was appointed by President Harrison as postmaster of Wakeeney and served from 1890 to 1894. He was removed to Savannah, Missouri, in 1894 and died there on May 19, 1907. He was interred in Savannah Cemetery.